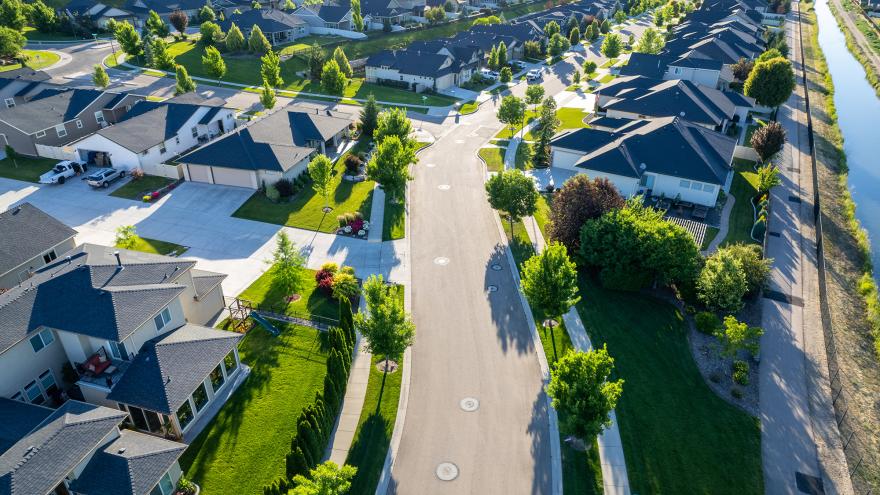 (CNN) -- Mortgage rates are on the rise again after a dramatic drop last week.

The 30-year fixed-rate mortgage averaged 5.51% in the week ending July 14, up from 5.3% the week before, according to Freddie Mac. That is significantly higher than this time last year when it was 2.88%.

Rates rose sharply at the start of the year, hitting a high of 5.81% in mid-June. But since then, economic concerns have pushed them lower, with rates last week notching the biggest one-week dip since 2008.

Mortgage rates continue to be volatile as the US economy slows and the Federal Reserve raises interest rates in order to cool inflation, said Sam Khater, Freddie Mac's chief economist.

"With rates the highest in over a decade, home prices at escalated levels, and inflation continuing to impact consumers, affordability remains the main obstacle to homeownership for many Americans," said Khater.

Growing pressure on the Fed

The rate for a 30-year fixed rate loan ticked higher as financial markets grappled with the latest inflation reading, which pointed to a sharp acceleration in consumer prices in June, said George Ratiu, Realtor.com's manager of economic research.

In order to tame inflation, the Federal Reserve has been raising interest rates. At its last meeting, it hiked rates by 75 basis points. Last month's inflation report indicates a similar or even larger increase is on the table at the central bank's next meeting later this month.

"With inflation approaching a double-digit pace, there's growing pressure on the Federal Reserve to take a more aggressive stance in its monetary tightening," he said.

A 75 basis-point hike is largely expected at its meeting in two weeks, but he said it's becoming clear that markets expect a move closer to 100 basis points.

Ratiu said the real concern is that, at the current pace, rising prices will push consumers up against a financial wall, leading to a sharp pullback in spending -- including on homes.

"The Fed has been walking a tightrope of gradually increasing borrowing costs while trying to avoid a knee-jerk reaction from consumers and businesses," Ratiu said. "However, with inflation soaring, the runway for a soft landing is shrinking considerably, as are the chances of avoiding a recession."

The Federal Reserve does not set the interest rates borrowers pay on mortgages directly, but its actions influence them. Mortgage rates tend to track 10-year US Treasury bonds. As investors see or anticipate rate hikes, they often sell government bonds, which sends yields higher and with it, mortgage rates.

Ratiu added that the 10-year Treasury slid on the inflation news, while the 2-year Treasury bounced higher, pushing the yield curve deeper into negative territory and heightening concerns of an impending recession. This is notable since yield curve inversions have preceded most economic recessions in the past 50 years.

What does this all mean for home buyers?

Generally, the summer real estate market is absorbing the impact of rising consumer prices and higher interest rates, Ratiu said. But buyers are being forced to make different calculations on what and where they can buy.

"With the monthly mortgage payment of a median-priced home running around $2,000 compared with $1,300 last year, many home buyers are finding that their budgets are no longer sufficient to purchase a home and are hitting 'pause' on their search," Ratiu said.

Simultaneously, many homeowners are rushing to capitalize on record-high prices, putting their homes on themarket and boosting the inventory that's available to buy.

"The combination of dwindling demand and growing supply is reshaping a housing market at the peak of the sales season," he said.

This is relaxing competition in the market, giving buyers more time and in some cases even pushing prices lower. The share of properties-for-sale with price cuts reached 15% in June 2022, more than doubling last June's 7%, according to Realtor.com

"We can expect the pace of sales to continue to slow as we move into the second half of the year and markets regain a much needed sense of balance."