Moroccan boy trapped in well has died, according to state media 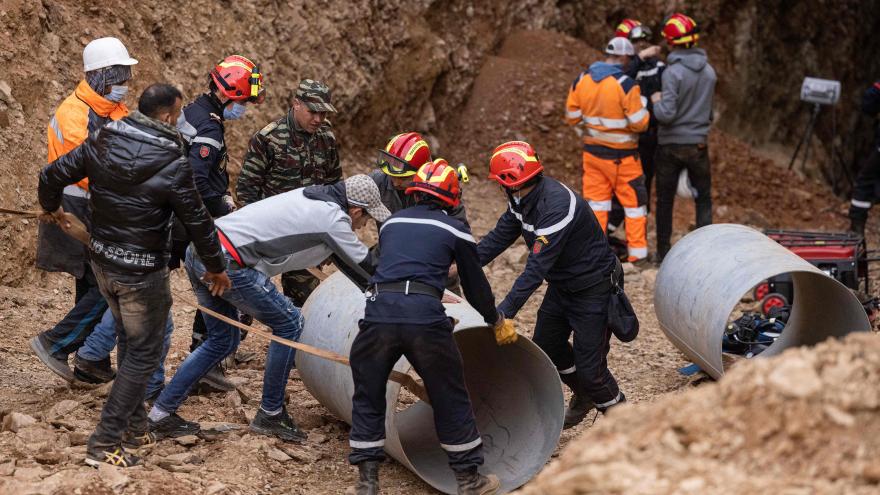 (CNN) -- A Moroccan boy who had been trapped in a well since Tuesday has died, according to two media outlets, Morocco's state news agency, Maghreb Arab Press, and SNRT.

The 5-year-old boy, previously identified only as Rayan, was retrieved by rescue teams from the well on Saturday but did not survive his ordeal, state media reported.

King Mohammed VI of Morocco offered condolences to Rayan's family in a phone call, according to a statement from the Royal Palace.

"Following the tragic accident that claimed the life of the child Rayan Oram, His Majesty King Mohammed VI, may God protect him, made a phone call to Mr. Khaled Oram, and Mrs. Wassima Khersheesh, the parents of the deceased who passed away, after falling into a well," the statement said.

The child was stuck in a well that reached more than 100 feet (30 meters) underground in the Chefchaouen province.

Rayan fell into the well Tuesday afternoon and was discovered after he was heard crying, his mother said in an interview with state-owned Al-Aoula TV two days later.

She said he was playing nearby before he disappeared, and that she quickly called authorities after finding out what had happened.

As rescue efforts continued throughout the week, gripping much of the country, the hashtag #SaveRayan went viral across North Africa.

The boy's father previously told Al-Aoula that authorities sent food and water down the well and that he saw his son drinking some water.

"He was moving, and drank a little bit of water. I believe he will be okay, God help him," he said.

Local media also reported that the child had taken food and water that was dropped down to him using a rope.

A report from MAP noted that it would be difficult to determine the time needed to complete the rescue operation, because of the nature of the soil that remained to be dug up in the horizontal gap connecting the well with a parallel hole.

Authorities used machinery in the difficult operation because the diameter of the well was only just over a foot and a half wide, Al-Aoula reported.

Meanwhile, a medical helicopter and medical staff specializing in resuscitation had also been deployed to the area to take care of Rayan once he was pulled from the well, local authorities told MAP.

The response and rescue teams remained at the site of the well since they learned about the incident, encountering several difficulties including a landslide and boulders in some layers, MAP reported. Hundreds of locals watched on as the efforts continued, photos showed.

"People who love us are sparing no effort to save my child," Rayan's father said as he stood watching rescue efforts on Friday night, Reuters reported.