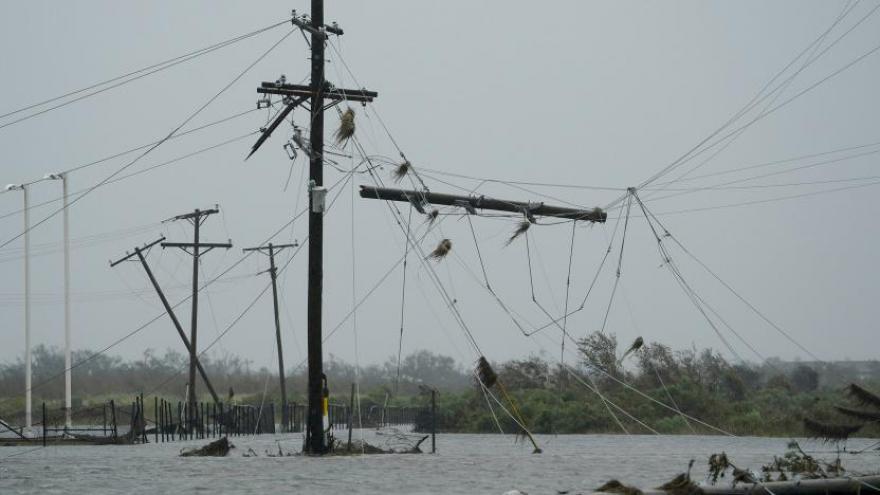 More than half the 15 deaths associated with Hurricane Laura were caused by the improper use of portable generators. This image shows floodwaters covering the street under downed utility wires after Hurricane Laura moved through the area.

(CNN) -- More than half the 15 deaths associated with Hurricane Laura were caused by the improper use of portable generators.

Laura destroyed parts of Louisiana's power grid after making landfall as the strongest hurricane to strike the state since 1856. The storm struck with 150-mph winds and shredded houses.

Eight of the state's confirmed deaths have been due to carbon monoxide poisoning, according to the Louisiana Department of Health.

The state's department of health had stressed that generators should be used outdoors and placed away from windows, doors and vents -- all of which can allow carbon monoxide to seep inside. Because carbon monoxide is odorless, it can be difficult to detect and can be dangerous indoors.

"We need people to be very safe and cautious when they run a generator," said Gov. John Bel Edwards in a news conference Monday.

The last known death was a 49-year-old man who passed away due to blunt force trauma when he was struck on the head by a tree.

The damage to the grid infrastructure in the southwestern part of the state is very extensive as more than 17,000 crew members working to restore power, Edwards told reporters in Baton Rouge.

About 324,000 customers are still without power as outages remain "extensive" across Louisiana, according to the governor.