More than half of Americans support vaccine mandates for workplaces, classrooms and sporting events 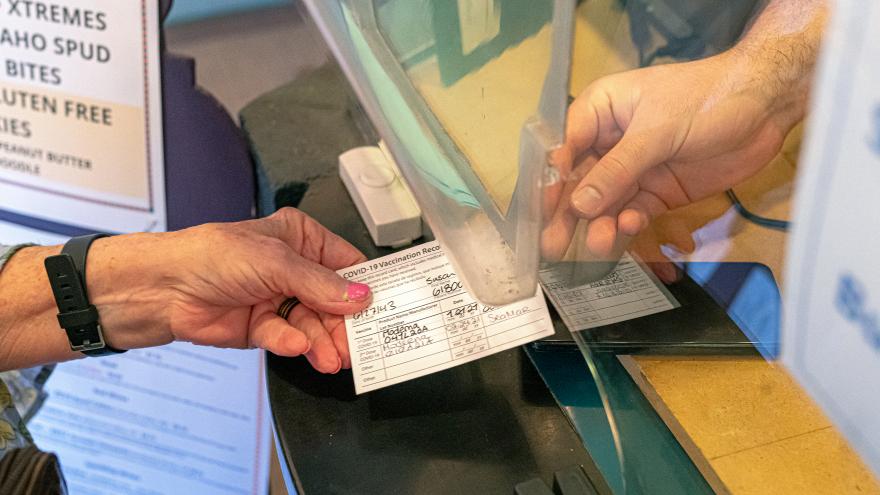 (CNN) -- Americans have grown more supportive of coronavirus vaccine mandates for workers, students, and in everyday public life, according to a new CNN poll conducted by SSRS. The shift comes amid renewed worries about the pandemic and a continued partisan divide over the efforts to combat it.

The public is split about evenly, 51% to 49%, on whether requiring proof of vaccination for everyday activities is an acceptable way to increase the vaccination rate, or an unacceptable infringement on personal rights.

Support for these mandates has risen across the board since April, growing 6 percentage points with regard to students, 8 points regarding office workers and event attendees, and 15 points regarding grocery shoppers.

The survey, which used a different methodology than prior CNN polling, was conducted over a month-long period in August and September, prior to President Joe Biden's announcement of new vaccine rules. Those requirements, announced last week, could apply to nearly two-thirds of the American workforce.

That move, the survey finds, follows a sharp resurgence of concern about coronavirus and its impact on the nation. An overwhelming 86% of the public say the pandemic isn't yet over in the US. Nearly two-thirds say that the country hasn't yet started to recover economically from the pandemic, either, with 41% saying that conditions are continuing to worsen -- a gloomier outlook than in March.

Most Americans, 64%, say they're still taking extra precautions against the coronavirus in their everyday lives, with just 36% feeling safe enough to carry out their lives largely as they did pre-pandemic. And the vast majority say they are vaccinated against coronavirus, with a new low of 22% saying they don't have and aren't planning to get a shot. About half say they always adhere to guidance from the US Centers for Disease Control and Prevention on Covid-19, with 38% saying they do so in some instances.

School mask requirements, which have touched off political battles in multiple states, are also broadly popular: 63% say all children attending school in-person should be required to wear face masks in the classrooms, with just 37% opposed.

Americans are politically divided on many aspects of the pandemic, from their personal reactions to their policy preferences -- a dynamic that multiple respondents to the poll, on both sides of the aisle, cited when asked to name the nation's biggest problems.

But that doesn't add up to a nation that's split down the middle on how it's handling Covid-19. Most Republicans say they are vaccinated (60%) and at least somewhat attentive to CDC regulations (76%) and a sizable number are continuing to take coronavirus precautions (40%), in each case joining an overwhelming majority of Democrats who say the same.

Even on issues of policy, Democrats tend to be more universally supportive of specific restrictions than Republicans are universally opposed -- a third of Republicans, for instance, support school mask requirements, while just 7% of Democrats are against them.

Looking to the future, Americans are in far more agreement about retaining some of the societal changes ushered in by the pandemic, even once coronavirus cases have dropped to a manageable level. There's broad support for retaining many remote alternatives: 86% say that companies should keep offering employees the option to work remotely, another 86% say that doctors should keep offering the option for telemedicine appointments, and 69% say that schools should continue offering remote learning options for students. Nine in 10 Americans also want to see restaurants keep expanded outdoor dining options, with 81% hoping that movies will continue to be released for at-home streaming at the same time they premiere in theaters.