More than a week after Uvalde massacre, officials are still avoiding the media's questions about what happened 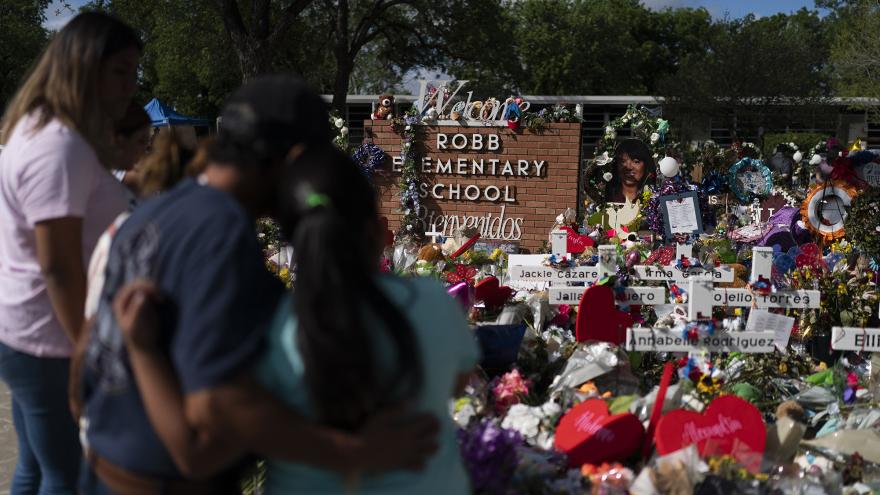 (CNN) -- The obituaries for the shooting victims of Robb Elementary took up three full pages in the Uvalde Leader-News on Thursday. The rest of the paper contains haunting questions about why they died.

The newest edition of the paper makes clear that many Uvalde-area officials are steadfastly declining to comment, even to the local reporters they know best.

Journalists from both local and national news outlets are hitting the same walls as public officials dodge questions and defer to ongoing investigations.

At first the officials shared what we're now told was incorrect information about everything from the gunman being first confronted by a school officer (he wasn't, they've since said) to a teacher propping open a door (the latest version is it wasn't propped open when the gunman entered).

Now the officials aren't sharing much of anything at all. The press briefings have stopped, with the last one held last Friday. The interviews have dwindled. "We are going to reserve comment until all state and federal agencies have completed their review," the Uvalde Consolidated Independent School District said in a statement on Wednesday.

The Leader-News reported that the local sheriff also declined to comment for the same reason, and the local police chief didn't respond at all. Uvalde Mayor Don McLaughlin is one of the few officials who has been speaking: He told the paper, "I want these families to have answers."

Reporters are seeking those answers in a variety of different ways: Emails, phone calls, requests for documents, and what editors sometimes like to call "shoe leather journalism" — showing up and knocking on doors.

CNN journalists took this approach Wednesday with Uvalde school district police chief Pedro "Pete" Arredondo, first when producer Aaron Cooper saw him outside his home, and then when CNN correspondent Shimon Prokupecz confronted him outside his office. "I just want your reaction to Director McCraw saying that you were responsible for the decision to go into that room," Prokupecz said — "how do you explain yourself to the parents?"

For now, he is not explaining himself. Arredondo declined to answer substantive questions.

Later that morning, reporters from CNN were threatened with arrest after they sought to speak with Uvalde school district spokeswoman Anne Marie Espinoza.

The door to the central office was closed on them, and a short while later about eight police cars showed up at the office. "The school district office called the police to ask the media to leave their property," Prokupecz wrote. Arredondo was said to be at the office.

Uvalde police officers alleged that the news crew was "trespassing" on Uvalde public school district property. The journalists then moved into the street and were told they would be arrested for trespassing if they stepped back onto the property.

At the end of the workday, around 6 p.m., San Antonio Express-News reporter Guillermo Contreras tweeted that the police were still there to "keep guard" as members of the media waited for Arredondo.

Marc Duvoisin, editor in chief of the Express-News, told CNN that "it was an isolated example of the tensions that have arisen as Uvalde goes through its second week of intense media coverage. This week, families began burying the slain children and teachers, and that no doubt has added to the tension."

Overall, Duvoisin said, "journalists are being allowed to do their jobs." But answers are few and far between. The banner headline in Thursday's Express-News may be one of the reasons why: "Officials brace for lawsuits."

In recent days there have been conflicting statements about Arredondo's cooperation with the Texas Department of Public Safety, which says it is leading the investigation into the shooting.

On Wednesday, after CNN made multiple inquiries to the department about Arredondo, a spokesman said the DPS is still leading the investigation but added that DPS is now deferring media questions to the District Attorney in Uvalde.

So Prokupecz and other reporters tried to speak with the D.A., Christina Mitchell Busbee, on Thursday morning. She ignored their questions. "There's a lot of information that needs to come out," Prokupecz said right before she closed the car door.