More than a dozen video clips were played during Kyle Rittenhouse's trial last week. Here's what they showed 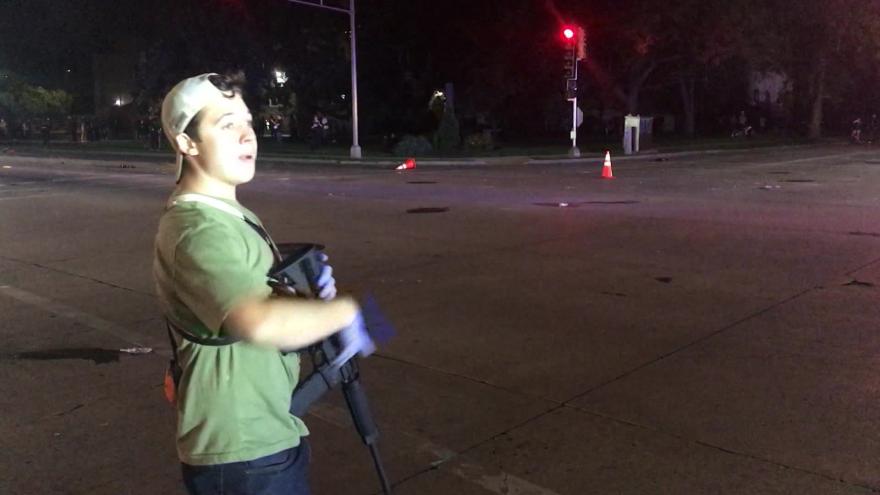 (CNN) -- More than a dozen video clips were entered into evidence during the first week of Kyle Rittenhouse's homicide trial in Kenosha, Wisconsin, as prosecutors and defense attorneys pieced together a chaotic night that turned deadly.

The videos, some of which show graphic footage from the aftermath of the shootings, were played Wednesday during testimony from Kenosha Police Det. Martin Howard, the lead investigator on the case. They include livestreams, FBI aerial video, an interview with Rittenhouse that night, body camera footage that was posted on social media and other clips recorded by witnesses during the demonstrations.

Rittenhouse, who is now 18, fired an AR-15-style weapon eight times on the night of August 25, 2020, amid protests following the police shooting of Jacob Blake. Those included four shots at unarmed Joseph Rosenbaum, 36, who was killed, two shots at an unarmed unknown individual, one fatal shot at unarmed Anthony Huber, 26, and one shot at an armed Gaige Grosskreutz, now 27, who was wounded, Kenosha County Assistant District Attorney Thomas Binger said in the trial last week. Rittenhouse's defense attorney said he fired only in self-defense.

Here's what the videos played in court show about that night.

What Rittenhouse said before the shooting

Clips played Wednesday by the state show Rittenhouse armed at different points during the night -- at one point interacting with authorities in armored vehicles who are heard in one clip thanking a group of armed men Rittenhouse is with.

"We appreciate you guys, we really do," one officer is heard saying.

In a separate clip, Rittenhouse tells the person recording he does not have any "nonlethal" force with him and that he was earlier pepper-sprayed by a person in the crowd.

In another clip from an on-camera video with Richie McGinniss, the chief video director of the Daily Caller, Rittenhouse says he was there to protect a business and "to also help people."

"If there's somebody hurt, I'm running into harm's way. That's why I have my rifle because I need to protect myself obviously, but I also have my med kit," Rittenhouse says in the video. McGinniss points to other armed men around Rittenhouse and asks what they are doing. Rittenhouse responds, "Their job is to protect me."

"We're running medical and we're going in and we're getting people," Rittenhouse says in the video, and adds that he is from the area. Rittenhouse is from Antioch, Illinois, just about 20 miles outside Kenosha.

Rittenhouse tells McGinniss he is a certified EMT and he begins walking around with another man, yelling if anybody needs medical help.

In another clip played while defense attorney Mark Richards cross-examined Howard, Rittenhouse is seen near a boarded-up business and later pulls a dumpster out of the street.

A chase that turned deadly

Several clips played by both the defense and prosecution captured Joseph Rosenbaum briefly chasing Rittenhouse in a Car Source dealership before Rittenhouse fired four shots at the man.

Richards, the defense attorney, played FBI infrared aerial footage, taken from nearly 9,000 feet in the air. Howard testified the video showed Rosenbaum hiding as Rittenhouse approaches the dealership lot, and Rosenbaum then starts to follow him.

"As Kyle (Rittenhouse) ... comes to the Duramax, this individual, Mr. Rosenbaum, begins to come out of his hiding place," said Richards, pointing to Rosenbaum in a video. Howard confirmed the attorney's statement and confirmed Rosenbaum was wearing a mask.

Richards also played a bystander video during which Howard, the lead investigator, testified Rittenhouse is seemingly heard saying "friendly, friendly, friendly" in the moments right around the start of the chase.

"And it does not dissuade Mr. Rosenbaum, correct?" Richards said.

Around the two men, the detective testified that loud noises heard in a video clip are "bats or other blunt objects hitting cars in the Car Source lot." During the chase, he testifies Rosenbaum is "gradually gaining ground on Mr. Rittenhouse."

An earlier clip showed Rosenbaum holding a plastic bag in his hand. Videos showed Rosenbaum throwing the plastic bag at Rittenhouse, but he was otherwise unarmed. His fiancée testified later in the week Rosenbaum had just gotten out of a hospital in Milwaukee and was carrying papers, socks, deodorant and a toothbrush and paste in that bag.

A total of eight shots were heard in the moments before and during Rosenbaum's fatal shooting, a clip showed. According to Howard, Joshua Ziminski fired the first shot from near the two men's chase. Rittenhouse then fired four shots roughly two-and-a-half seconds after. The other three shots came from a nearby area, but the detective said it was hard to confirm who fired and why because there was no good video available.

Ziminski, 36, has been charged with disorderly conduct using a dangerous weapon, arson and obstructing an officer, and he has pleaded not guilty, court records show. A criminal complaint says he admitted to firing a "warning shot" in the air that night.

The prosecution played graphic clips that showed Rosenbaum lying on the ground with a head wound following the shooting as a crowd of people attempted to tend to him and put pressure on his wounds before eventually carrying him to a vehicle that took him away.

Rittenhouse is captured in videos running away from the scene of the first shooting. In one video played by prosecutors, some people are heard yelling, "Why did you shoot him," as several individuals start running after him.

Grosskreutz, who was later injured, is seen on Rittenhouse's left, the prosecution said. A video clip played by the state shows the moments Huber, holding a skateboard, approached Rittenhouse, who was on the ground, before getting shot and staggering away, eventually falling down.

The clip also showed the moment of Grosskreutz's shooting, who then ran away as Rittenhouse stood back up.

The person recording approaches Grosskreutz, who is kneeling on the ground as he holds his bloody arm, yelling for a medic. The clip then shows Rittenhouse walking away from the scene with his hands up, as armored vehicles drive by him, and people nearby yell, "he shot them."

The detective testified Rittenhouse fired his gun a total of eight times that night and that the shootings -- starting from the chase with Rosenbaum to when Rittenhouse walked away with his hands up -- all took place within less than four minutes.