More than a dozen Republicans tell House they can't attend votes due to 'public health emergency.' They're slated to be at CPAC. 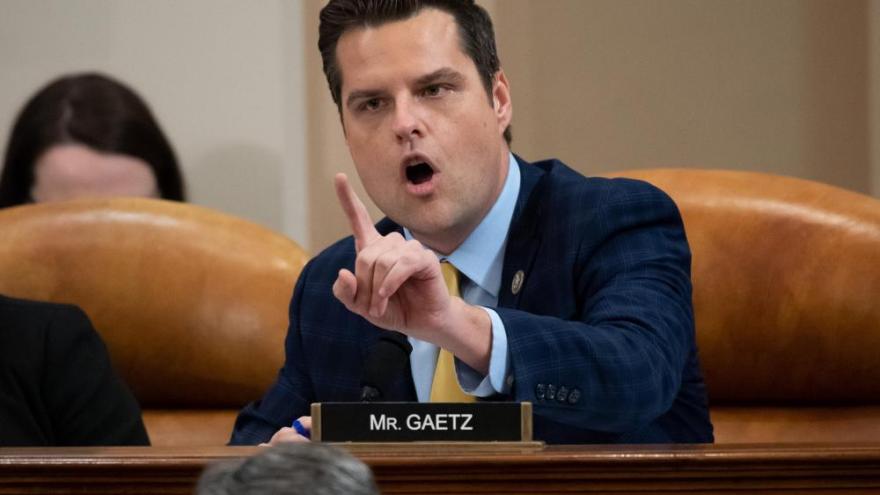 (CNN) -- More than a dozen of former President Donald Trump's closest Republican allies in the House skipped Friday's votes and enlisted their colleagues to vote on their behalf, signing letters saying they can't attend "due to the ongoing public health emergency."

But those members are actually in Orlando and listed as speakers at the Conservative Political Action Conference, an annual meeting aimed at energizing conservative activists and boosting their own profiles.

The members include Florida Rep. Matt Gaetz, who addressed the conference on Friday, as well as others who were listed as scheduled speakers -- such as Reps. Paul Gosar of Arizona, Jim Banks of Indiana, Madison Cawthorn of North Carolina, Ted Budd of North Carolina, Mark Green of Tennessee, Darrell Issa of California, Ronny Jackson of Texas, Mike Kelly of Pennsylvania, Rep. Lauren Boebert of Colorado, Ralph Norman of South Carolina, Devin Nunes of California and Greg Steube of Florida.

While most of the offices of those members didn't respond to requests for comment, an Issa spokesman contended that his boss did nothing untoward.

"Congressman Issa complied with all House voting rules in lodging his opposition to what the Democrats labeled as Covid relief, but that devoted more than 90 percent of its total to non-Covid spending," Issa's spokesperson Jonathan Wilcox said in a statement.

The move is especially surprising given that Republicans were furious critics of the system to vote by proxy during the coronavirus pandemic, even suing over it and often ridiculing Democrats for staying at home and demanding they return to Washington.

"Leaders show up no matter how uncertain the times are," Cawthorn tweeted last summer. "The Democrats are cowards for not showing up to work."

CNN on Saturday asked Kelly and Norman why they voted by proxy in order to attend CPAC.

"I think it's become dramatically different of what we can do and what we can't do," Kelly said. "There's a lot of things we want to participate in. I have voted for several of our members by proxy because for one reason or another they couldn't be here, or in the Capitol, but for us, this is important to be here (CPAC), too."

When CNN asked about his letter citing public health reasons, he rolled his eyes and walked away.

"Nancy Pelosi sets the schedule. CPAC has been planned for months. She moved the date from starting on Monday and she changed it to Tuesday and ran it through the weekend. That's unbelievable. It's unacceptable," he said.

Asked why his letter cited a public health matter for his reason to vote by proxy, Norman told CNN: "That's the only thing you could check. It doesn't matter. If she wants to change that, change it."

To vote by proxy, lawmakers must sign a letter with the House clerk and allow another member to vote at their direction and on their behalf. The letters, which are filed with the House clerk's office, say: "I am unable to physically attend proceedings in the House Chamber due to the ongoing public health emergency."

Top Democrats on Friday reacted strongly to the news, first reported by CNN.

"Apparently hypocrisy has become a tenant of the Republican Party," said House Rules Chairman Jim McGovern, a Democrat of Massachusetts. "Let me get this straight: these Members can't vote in person because of the pandemic, but they manage to attend CPAC? They were even maskless at this super spreader event. It's outrageous!"

Friday was a critical day in the House, where Democrats passed the massive $1.9 trillion Covid relief plan -- though all the Republicans at CPAC opposed the measure.

Republicans aren't the only ones who have misused this process.

Democrats in the past have signed similar letters, saying they couldn't attend because of the public health emergency, voting by proxy instead even though their failure to show up had nothing to do with the pandemic.

"Another Democrat caught claiming he couldn't come to DC to vote 'due to the ongoing public health emergency,'" the California Republican tweeted at the time. "But he was OK to attend a rocket launch."

This story and headline have been updated with additional reporting.