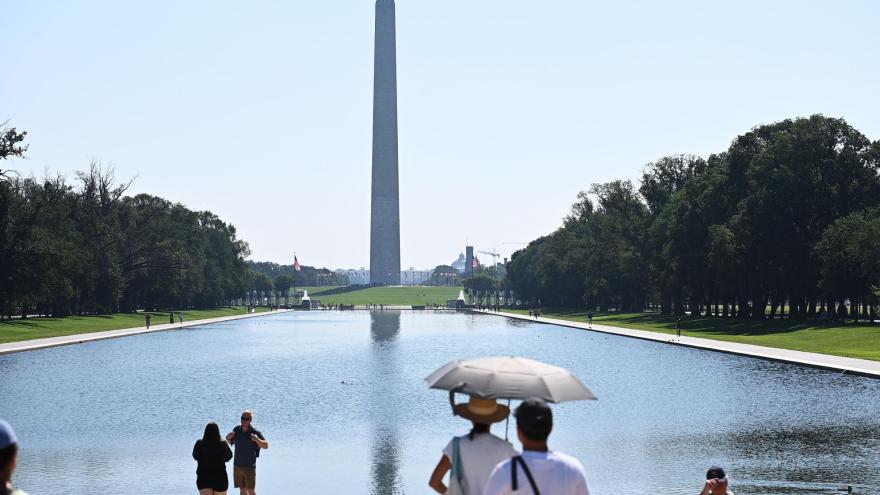 (CNN) -- The deadly heat wave scorching much of the US will continue Sunday, when the Northeast and mid-South regions are likely to be suffocated by temperatures feeling as hot as 105degrees.

More than 90 million people across the country are under various heat alerts for dangerously high temperatures. Sunday is expected to bring the hottest temperatures to the Northeast.

"From the southern Plains into the East, it will feel extremely oppressive, especially in the major metro areas of Washington D.C. to New York City and Boston," the National Weather Service warned.

In New York City, at least one person died from heat exposure Saturday, a spokesperson for the city's medical examiner's office said. The person also had other medical issues, the spokesperson said. The forecast high in the city Saturday was 97 degrees.

Other heat-related deaths during this week's heat wave include a 66-year-old Dallas woman who had underlying health conditions, according to county officials. And Wednesday, a 22-year-old hiker died due to possible dehydration and exposure after running out of water in a South Dakota national park, local officials said.

Cities including Philadelphia, Boston and Washington, DC, are set to see heat in the upper 90s, with humidity intensifying conditions to feel as high as triple-digits.

The extreme conditions -- which experts note are becoming more common around the globe due to climate change -- have led local officials to issue heat emergencies to allow for resources to aid in confronting the heat millions have been enduring. Officials are also imploring people to practice extreme caution when spending time outdoors, stay hydrated and check on vulnerable communities and neighbors.

On Sunday, heat index values -- what the air feels like -- may exceed 100 degrees in some areas due to stifling humidity, the Weather Prediction Center noted.

"Widespread high temperature records are forecast to be tied or broken from the Mid-Atlantic up into New England (Sunday) with many places expected to hit the upper 90s and heat indices to eclipse 100 degrees," the prediction center wrote.

In Philadelphia, where the high is expected to be 99 degrees Sunday, officials extended a heat health emergency. Cooling centers, home visits by special teams and enhanced daytime outreach to people experiencing homelessness are available through the weekend.

"Very hot weather can make people sick, even healthy adults. During this heat wave, please be sure to check on neighbors and loved ones, especially the elderly," Philadelphia Mayor Jim Kenney wrote on social media.

To the west, in Greensburg, Pennsylvania near Pittsburgh, more than 10,000 customers were still without power Sunday after storms a day earlier.

"With another round of storms potentially in the forecast later today, delays and additional outages are possible," West Penn Power said. "As higher-than-normal temperatures are also impacting our service area today, customers should take any necessary steps to stay safe and escape the heat."

In Washington, DC, where the mayor declared a heat emergency earlier this week, temperatures are expected to reach 100 degrees Sunday. The emergency will last through at least Monday morning, allowing for the availability of shelters and cooling centers to serve those who need them, Mayor Muriel Bowser said.

"We need everyone to be on alert this weekend, keeping an eye out for any signs of heat-related illness and looking after one another," Hochul said in a news release.

In the US, excessive heat is the leading cause of weather-related deaths, and the conditions climate change imposes have been making extreme weather events more deadly and more common.

In fact, heat deaths have outpaced hurricane deaths by more than 15-to-1 over the past decade, according to data tracked by the National Weather Service.

Part of the problem is the high humidity making it feel like more than 100 degrees in many areas also makes it harder for the body to cool down.

"Sweating removes 22% of excess body heat by redirecting heat towards the evaporation of the sweat," CNN meteorologist Robert Shackelford explained. "High humidity means that there is more moisture in the air. Since there is significantly more moisture in the air, it causes sweat to evaporate slower, which leads to a slowing down of your body's natural ability to cool.

New York City sees an average of 10 heat stress deaths every year, according to a report commissioned last year by the city's health department. The report found a lack of home air conditioning "continues to be an important risk factor for heat stress death."

It is not known whether the person who died of heat exposure Saturday had access to air conditioning.