More than 90,000 Americans could die of Covid-19 in next three weeks, CDC forecast shows 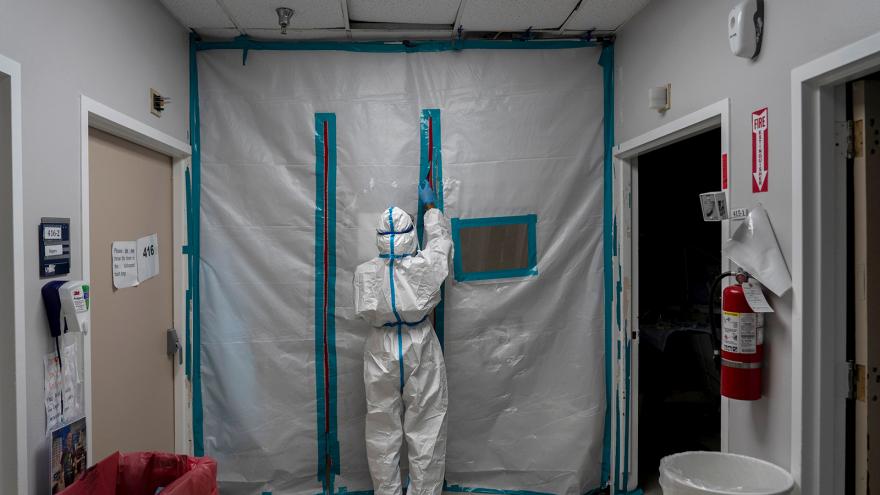 Another 92,000 are projected to die from the virus over roughly the next three weeks, according to an ensemble forecast published by the Centers for Disease Control and Prevention.

The numbers are scary and reflect what public health experts have repeatedly warned: While the end is in sight -- with the help of ongoing Covid-19 vaccinations -- the nation still faces challenging times ahead.

With so many deaths from Covid-19, researchers said Thursday the pandemic will reduce US life expectancy by more than a year to 77.48 years for 2020 -- lower than any year since 2003.

"Some reduction in life expectancy may persist beyond 2020 because of continued Covid-19 mortality and long-term health, social, and economic impacts of the pandemic," Theresa Andrasfay of the University of Southern California and Noreen Goldman of Princeton University's Office of Population Research wrote in the Proceedings of the National Academy of Sciences.

Currently, more than 130,300 people are hospitalized with the virus, according to data from the COVID Tracking Project.

In Pennsylvania, officials said the number of hospitalizations are nearing double the peak experienced during spring. Louisiana's governor said earlier this week the state was seeing a "huge spike" in infections and hospitalizations. And in Arizona, officials on Tuesday reported record-high Covid-19 hospitalization and ICU numbers.

Hundreds of thousands of infections are added to the country's tally every single day, with the US adding more than three million new reported infections since the start of the month.

In Los Angeles County, about one in three residents has been infected with the virus since the pandemic's start, according to data published by county officials. Outbreaks have increased across workplaces as well as schools and day care settings, they said.

Echoing other leaders' warnings, the LA officials added they have "not yet fully seen the effect of transmission in the period from around Christmas to New Years."

And with all eyes now turned to the nation's capital ahead of Inauguration Day, cases in Washington, DC have never been higher. Right now, it's averaging more than 320 new cases every day -- about a 38% jump from the previous week. DC has reported a total of more than 32,600 Covid-19 cases since the pandemic's start, about 10% of which have been added in 2021.

So far, more than 30.6 million Covid-19 vaccine doses have been distributed nationwide and more than 11.1 million Americans have received their first dose, according to data from the CDC.

According to CNN's analysis of data from a dozen states that publish demographic information online, roughly twice as many women as men are getting vaccinated. In at least three -- Pennsylvania, South Dakota and Nebraska -- women account for more than 7 in 10 people vaccinated.

Experts say this may reflect who has been eligible early in the vaccine rollout: health care workers and older adults.

Texas Gov. Greg Abbott announced Thursday that the state has vaccinated more than 1 million people since the vaccines were first distributed a month ago.

"This is the biggest vaccination effort we have ever undertaken, and it would not be possible without the dedication and tireless efforts of our healthcare workers," Abbott said in a news release. "We still have a long road ahead of us, but Texans continue to prove that we are up to this challenge."

Some experts have encouraged states to open vaccine eligibility to more groups, to help speed up vaccine administrations.

"There is no higher priority than efficiently and equitably distributing these vaccines as quickly as possible to those who face the gravest consequences," Gov. Gavin Newsom said in a statement. "Individuals 65 and older are now the next group eligible to start receiving vaccines. To those not yet eligible for vaccines, your turn is coming."

The announcements follow similar ones made by state leaders including Mississippi Gov. Tate Reeves, who earlier this week said residents 65 and older or those with preexisting medical conditions can make appointments for Covid-19 vaccinations.

"My main priority is not to try and fight this pandemic with stricter and stricter orders," Reeves said. "It's to get better and better at distributing the vaccine, and that's what our focus is now."

And while expanding the list of who can get vaccinated, states are coming up with more options for where residents can get their shots.

New York City Mayor Bill de Blasio is working on a plan to use the Yankee Stadium as a vaccination site, he said Wednesday.

"That plan is in motion,' he said, adding the city will release more details when the plan has been worked through.

De Blasio's announcement came about a day after he and New York Mets owner Steve Cohen said a 24-hour vaccine mega site will be set up at Citi Field in Queens later this month.

In Hawaii, officials said they are opening two new Covid-19 mass vaccination sites, which they hope can in a few weeks be able to vaccinate between 3,000 and 4,000 people daily.

And in California, the Disneyland Resort in Anaheim is now Orange County's first "super" Covid-19 vaccination site. Hundreds of cars had lined up for its opening on Wednesday, CNN affiliate KCAL/KCBS reported.

The site will be able to vaccinate upwards of 7,000 people each day, said Andrew Do, acting chairman of the county's Board of Supervisors.

Here is how pharmacies will help

On Wednesday, the head of one of the nation's largest pharmacy chains expressed optimism that it could soon be giving as many as a million vaccine doses daily.

"We're very hopeful that the federal program will open up soon and open a more direct distribution into pharmacies across the country, which will open up access," CVS Health Executive Vice President Karen Lynch said Wednesday during the annual J.P. Morgan Health Care Conference.

CVS can administer 25 million vaccinations a month, Lynch said, through its retail locations across the country.

"We have a large reach," Lynch added, saying the company's 10,000 stores can reach about 85% of the American population.

Walgreens said earlier this week it expects to administer about 30 million doses of the Covid-19 vaccine across the country by the end of this summer, once vaccines are available to the wider population.

The drugstore chain said it is hiring and training staff and increasing digital and phone booking capabilities in preparation for the wider vaccine rollout.

"We're making sure that everyone is ready to get after this as soon as the vaccines become available en masse, which we believe will be probably March, April," Walgreens COO Alexander Gourlay said at the conference.