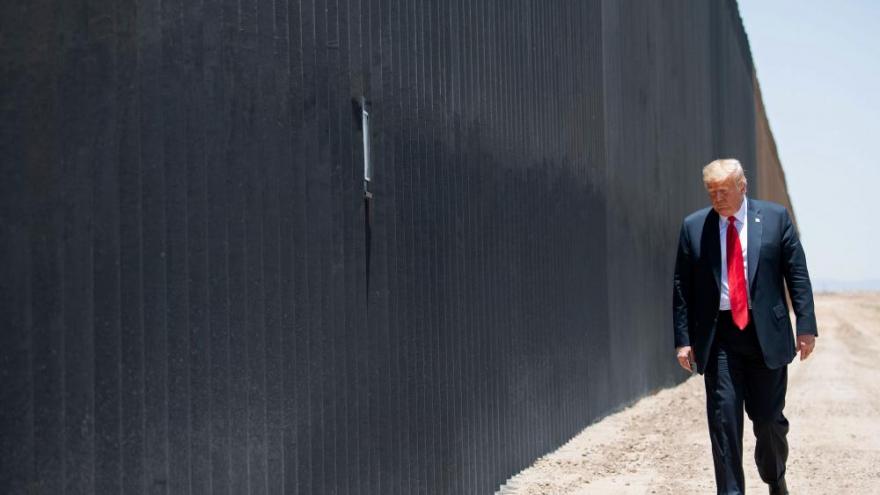 President Donald Trump participates in a ceremony commemorating the 200th mile of border wall at the international border with Mexico in San Luis, Arizona, June 23, 2020.

(CNN) -- The Trump administration is considering painting more than 80 miles of border wall black in Texas, according to US Customs and Border Protection officials, a move in line with President Donald Trump's push to paint barriers that could cost tens of millions of dollars extra.

Earlier this year, CBP, which oversees border wall construction, said it was testing the black coating along some sections of the US-Mexico border in an effort to assess the operational benefits. That could extend to 82 miles in the Rio Grande Valley and Laredo, Texas. Agency officials told CNN the epoxy coating is an option for when future barriers are built.

"We've got existing contracts with the option in the contract to paint," a CBP official said. The reason behind the black finish, officials argued, is in part to provide a contrast against the natural surroundings.

It could cost an extra $1 million per mile, the agency said.

During an Oval Office meeting last year, Trump told various government officials that he wanted the wall to be painted black and to include French-style doors.

CBP officials, who were not authorized to speak on the record, maintained the idea of painting barriers is not new. They also considered using white, but found that it could blend in with its surroundings.

"This isn't new conversation about paint or coating. We've had that over the years," a CBP official said. "It's hard to say that that rust and the black changes that much, but it does because there's just nothing natural out there that's painted that black."

But current and former agency officials argue the painted finish would have little effectiveness, saying it's largely being done to placate the President. "Any technical, structural or engineering enhancement that paint provides is extremely limited," a US official said, adding that it will cost more in the long run to reapply paint as it wears.

"The stated reasons for painting the wall black changed so much, the only thing that hasn't change is the President's desire to paint it black," a former Homeland Security official told CNN.

Acting Homeland Security Secretary Chad Wolf previously said that the administration was assessing whether to paint the border wall in an effort to extend its lifespan. "How do we get a longer lifespan out of the wall? And if that means, if we can paint it and it prolongs the life then we'll do just that," he told reporters in Tucson, Arizona, in May.

The administration is quickly pressing forward with its stated goal to build 450 miles by the end of this year, the majority of which replaces old, dilapidated wall, with a new enhanced wall system. CBP officials said they're on pace to reach that goal, building between 10 to 12 miles a week.

The southern border wall has been a cornerstone of Trump's presidency. Over the last three years, Trump has stirred controversy in his attempts to dip into military money for wall construction after Congress refused to provide the requested funds, floated ideas on the wall's appearance and function that surprised officials, and regularly cited the ongoing construction as an achievement.

"My administration has done more than any administration in the history to secure our southern border. Our border has never been more secure," Trump said in June during a visit to the wall.

Since January 2017, around $15 billion has been identified to construct roughly 738 miles of new border wall system using Homeland Security, Defense and Treasury Forfeiture Fund money. That includes miles that have been constructed, those still under construction, and miles in the pre-construction phase, according to CBP.

To achieve the 450 mile mark, however, the President has taken unprecedented steps to shore up funds, including last year's national emergency declaration. His administration has also waived numerous environmental and contracting laws to speed up construction.

In February 2019, Trump declared a national emergency in order to secure funding to build his signature wall. The move paved the way for Trump to unlock billions of dollars in federal funds to construct additional barriers on the southern border, bypassing Congress after lawmakers refused to meet his multi-billion-dollar funding request. This year, the White House renewed the emergency despite a drop in illegal border crossings.

The myriad ways the administration has sought to obtain funds has fueled lawsuits nationwide from states, environmental groups and border communities. At the core of the lawsuits is the accusation that the Trump administration circumvented Congress to obtain money for the wall.