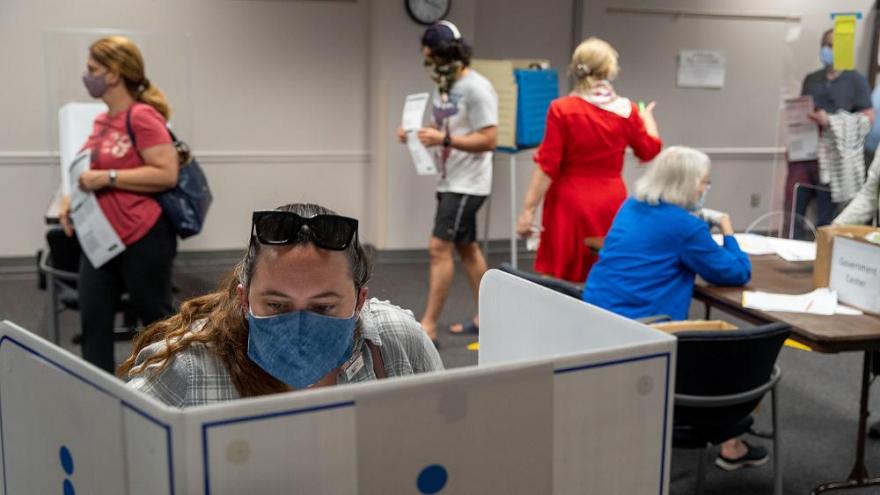 Voters cast ballots, spaced apart due to covid-19 at the Fairfax Government Center on September 18, 2020 in Fairfax, Virginia.

(CNN) -- More than 7.3 million Americans have already voted in the general election, according to a CNN and Edison Research survey of election officials in 36 states reporting voting data.

More than 4.3 million of those votes come from 12 of CNN's most competitively ranked states. And Democrats lead Republicans in all six of those states reporting returns by party.

This data does not predict the outcome of any race, as polling around the country shows Republicans strongly prefer to vote in-person on Election Day rather than early.

The information contains insights and details about who is voting ahead of November 3. While the returns represent a small fraction of the expected number of ballots to be cast in 2020 -- Donald Trump and Hillary Clinton received about 130 million votes combined four years ago -- some states have reported that the numbers of ballot requests and returns have already set records.

Ballot requests in 38 states, whether by mail or through some form of in-person early voting, surpassed 35 million this week.

Pre-Election Day ballots cast across the country are expected to rise quickly as the country moves closer to the November 3 election. By the end of the week, the ballots will be available in all 50 states and Washington, DC.

"More than 700,000 Iowans have requested absentee ballots for the 2020 general election, surpassing the state record for absentee requests in an election," Iowa Secretary of State Paul Pate tweeted this week. "The previous high was more than 693,000, set in 2016."