More than 600 geographic sites across the US will be renamed, replacing a derogatory term for Indigenous women used for decades 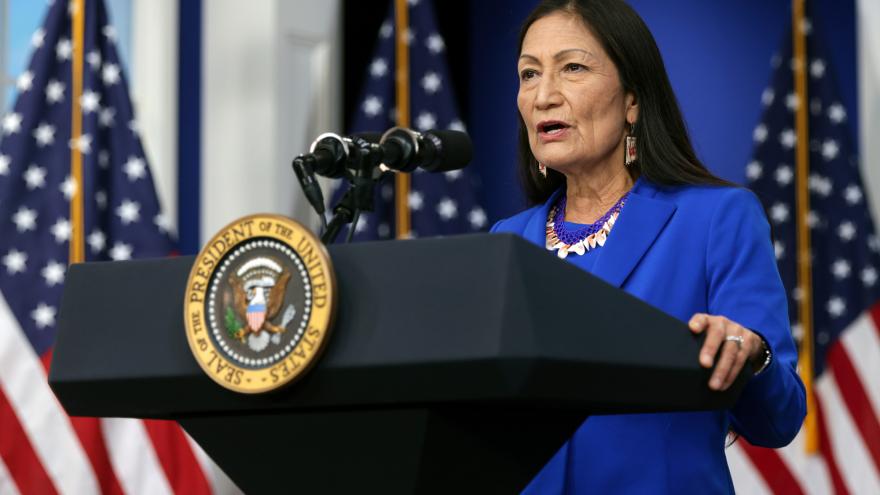 By Sara Smart, (CNN) -- The Department of the Interior is moving forward with removing and replacing a derogatory term for Indigenous women used for decades across the US, the department said Tuesday.

Interior Secretary Deb Haaland issued an order declaring "squaw" derogatory in November. The term has historically been used as an offensive ethnic, racial and sexist slur towards Indigenous women, the department said in a news release at the time.

Haaland, who is the first Native American to serve as a cabinet secretary, established a 13-member task force to rename more than 600 geographic features that contain the term through that order.

Now, the department is moving onto the next steps.

The department on Tuesday issued a list of possible replacement names for the geographic sites, and is looking for public comments on the proposed names, according to a news release. The comment period is open through April.

The agency said it has also begun tribal consultations.

"Words matter, particularly in our work to make our nation's public lands and waters accessible and welcoming to people of all backgrounds." Haaland said in Thursday's news release. "Throughout this process, broad engagement with Tribes, stakeholders and the general public will help us advance our goals of equity and inclusion."

A map created by the Names Task Force shows the locations requiring new names across the country. Places ranging from White Squaw Island in Maine to Squaw Hollow in Oregon will have to be renamed.

The department has already replaced the term with "sq_ _ _" in official communications.

Groups like the Native American Rights Fund have noted the significance of this move.

"It is well-past time for us, as a nation, to move forward beyond these derogatory terms and show Native people --and all people -- equal respect," the fund's executive director John Echohawk said in a news release.

The locations that include the term are expected to be changed in a matter of months.

Some places have gotten a head start with changes. Squaw Valley Alpine Meadows -- the mountain resort used in the 1960 Winter Olympics -- changed its name to Palisades Tahoe in September.