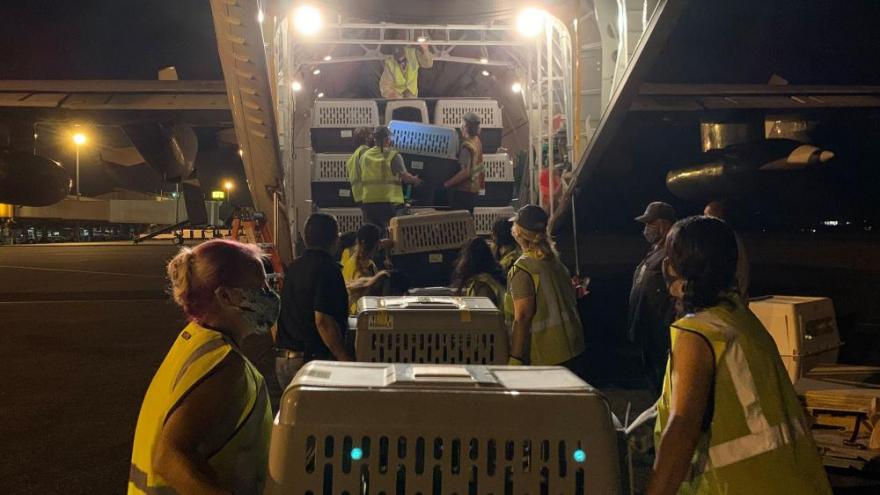 More than 600 dogs and cats are loaded onto a Hercules C-130 plane destined for the US mainland.

(CNN) -- More than 600 adoptable cats and dogs were airlifted from Hawaii to the US mainland in the largest animal rescue flight in history, according to Hawaii's Emergency Management Agency.

Dubbed "Paws Across the Pacific," a chartered Hercules C-130 plane flew across the Hawaiian Islands on October 28, picking up dogs and cats from overcrowded shelters on Kauai, Oahu and Maui.

"Pet shelters in Hawaii are in a COVID-19 crisis. Normal operations have been affected by months of shut down, economic downturn, limited hours, and routine flights to mainland halted," said Liz Baker, CEO of Greater Good Charities, which supported the flight in partnership with Wings of Rescue. "The Paws Across the Pacific flight is urgently needed to make space in Hawaii's shelters for at-risk pets who otherwise wouldn't be able to receive necessary care to survive."

The plane landed at Seattle's Boeing Field on Thursday, where it was met by volunteers from pet shelter and rescue groups across Washington State, Oregon, Idaho and Montana.

Baker had a personal interest in its success -- a chocolate puppy lab that she has named "Hilo" in honor of his hometown. She decided to adopt the dog after the sudden death of her dog, Stella.

She made the trek from Phoenix to Seattle to meet the plane on the tarmac at Boeing Field.

"I know there are other Stellas on that flight," she told CNN with tears in her eyes, holding Hilo in her arms. "We are so proud to help all of these animals find loving homes."

Taking hundreds of dogs and cats out of Hawaii was no easy feat. The airlift was done in coordination with the Hawaii Veterinary Medical Association to ensure they all arrived safely.

Baker confirmed to CNN that all the animals on board "Paws Across the Pacific" arrived in Seattle healthy, as she prepared to take Hilo back to her home to Phoenix.