More than 60 million people across Southwest are under heat alerts. And summer is still 10 days away 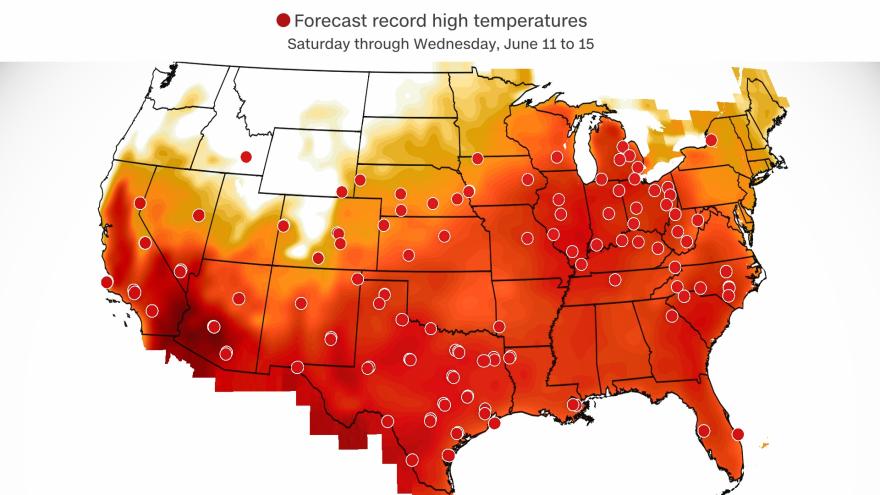 (CNN) -- The official start of summer is 10 days away but more than 60 million Americans are under heat alerts Saturday from California to Louisiana, with triple digit temperatures expected to melt away daily records across the Southwest.

Temperatures across the Central Valley of California and Southwest will be dangerously hot as they climb well into the triple digits Saturday afternoon.

The record heat will extend from Sacramento to Houston. In fact, more than 140 cities across the US could break daily records over the next few days, and even overnight low temperatures are expected to reach dangerous levels.

A taste of the record temperatures came Friday

High temperatures across the central and southern Plains Saturday also will climb into the 90s and triple digits. But heat index values -- the "feels like temperatures" -- could approach 113 degrees, especially across South Texas.

A taste of the dangerous and potentially deadly heat came on Friday when several big cities set new records.

Yes, the desert is a hot place but Death Valley in eastern California hit a new daily record of 123 degrees, shattering the previous high, in 1994, by 3 degrees.

Over 45 million of those people -- or about 15% of the population of the lower 48 -- will experience triple digit temperatures through next week, mostly across California's Central Valley, the desert Southwest, and the southern and central Plains.

Relief from the uncomfortably hot and humid weather will begin in northern and central California on Sunday and Monday with the arrival of a pair of cold fronts.

But the dome of heat will just shift into the central and eastern states, bringing broiling temperatures to the Plains and Midwest into early next week.

On Monday, most of the record temperatures will stretch between Denver and Raleigh, North Carolina, but could spread as far north as Wisconsin and Michigan by the middle of the week.

Chicago could top out in the 90s on Tuesday and Wednesday.

And overnight lows -- which usually allow the body to adequately cool down -- could be as unforgiving as the daytime highs.

"Your body requires cooling off at night, and actually expects it while you're sleeping," says Jenn Varian, meteorologist at the National Weather Service Las Vegas office.

"When we have very warm overnight temperatures, your body is simply not able to cool off properly, which in (and) of itself can cause complications, but will set you up to be less prepared for the daytime heat as well."