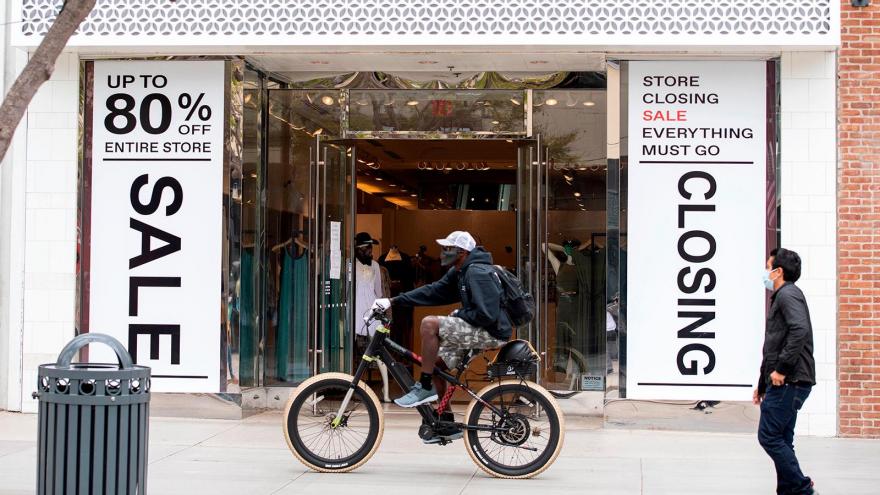 More than half of US adults live in households that have lost income from jobs.

(CNN) -- The numbers show just how much the coronavirus pandemic has upended Americans' lives over the past four months -- and that things are getting worse.

The most startling statistic: More than half of US adults live in households that have lost income from jobs.

That share, based on the latest Census Bureau survey conducted from July 16 to July 21, has crept upward in recent weeks.

At the same time, the number of Americans who say they haven't worked in the past week also climbed, before declining somewhat in the most recent survey, the last scheduled to be released.

The report paints a gloomy picture of the economy, just as Congress and the White House struggle to decide whether to provide another shot of financial assistance to the nation. One of the things holding up negotiations is the extension of enhanced federal unemployment benefits.

Data from the Census Bureau's weekly reports, which have tracked the virus' impact on multiple facets of Americans' lives since late April, show that conditions were stabilizing or even improving a bit until mid-June. That's around the time that the coronavirus was surging in the South and the West, which forced more than two dozen states to halt, or even reverse, their reopening plans.

For instance, the number of people reporting they hadn't worked in the past seven days slipped to 113.3 million in mid-June, down from a high of 120.1 million a month earlier. But the numbers began climbing again to 119.8 million in July, before slipping to 118 million the following week in the most recent survey.

Those reporting household income losses bounced around between 47% and 48% for much of the survey, but began climbing in recent weeks to 51.1%.

Some 20.5 million Americans lost their jobs in April -- the steepest decline on record. Although more than 7 million people found work in May and June, the unemployment rate was 11.1% last month, higher than the peak of the 2008 financial crisis.

The recent surge in cases is likely to mean even more layoffs and hardship, especially when combined with the shaky finances of larger companies, several of which have recently announced bankruptcies, store closings, sweeping job cuts or massive potential downsizings.

Meanwhile, the number of Americans filing first-time unemployment claims has risen for the past two weeks. And it's possible that the July jobs report, which will be released August 7, will once again show a decrease in employment.

"The virus spread and economic rollbacks in the weeks since do not bode well for the labor market in the weeks and months ahead," said Greg McBride, Bankrate.com chief financial analyst.

The census survey also reveals the toll the pandemic is taking on Americans' well-being.

Some 26.5% said they either missed last month's rent or mortgage payment, or had slight or no confidence that their household could make the next payment on time. That's up from a low point of 22.1% in early June and 24.6% in the initial survey.

And more than 12% of Americans lived in households where there was either sometimes or often not enough to eat in the previous seven days, up from 9.7% in mid-June and 9.8% in the first survey.

The pandemic is also affecting people's mental health, especially as it drags on for months.

Nearly a quarter of respondents reported feeling down, depressed or hopeless nearly every day or more than half the days of the past week in the most recent report.

When the survey began, that figure was about 18.6%.