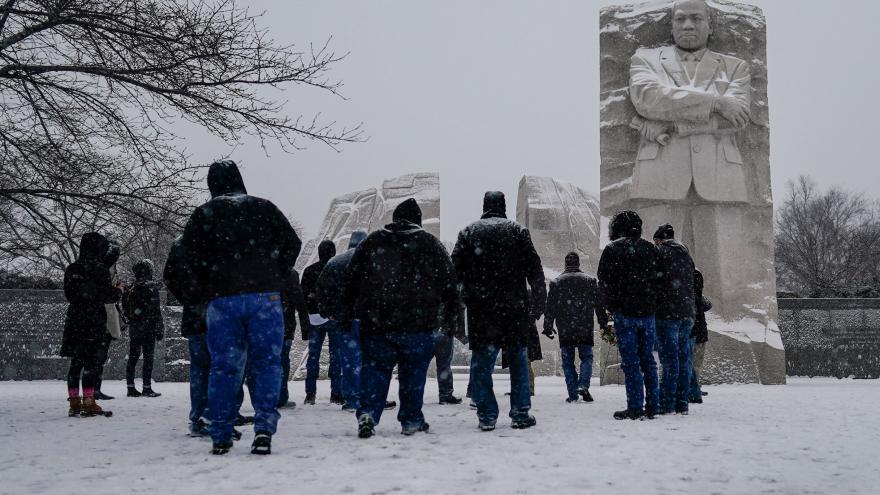 (CNN) -- More than 50 million people across the eastern US are under winter weather alerts early Monday as a massive storm system churns on after leaving its mark from Florida to Maine with tornadoes, freezing rain and snow.

The winter storm will bring more heavy snowfall on the Martin Luther King, Jr. holiday to the Northeast after causing widespread power outages, major road closures and myriad flight cancellations a day earlier across the Southeast.

Eight to 12 inches of snow could fall Monday Pittsburgh and Buffalo, New York, CNN meteorologist Michael Guy said. More than a foot of heavy snow is also expected across the upper Ohio Valley through the lower Great Lakes region, according to the National Weather Service.

Strong winds Monday could lead to coastal flooding from Virginia to Maine, Guy said. Buffalo could see wind gusts up to 45 mph, while New York City may get 55-mph gusts, and some parts of Maine could see gusts up to 65 mph.

Cold air behind the storm system and a prior arctic plunge over the Northeast will keep temperatures below freezing until Wednesday in that region, while parts of the South and Mid-Atlantic will see temperatures recover by Tuesday, Guy said. But another round of bitter cold, possibly with snow, is shaping up for the end of this week, he added.

Drivers warned to stay home due to slick roadways

While the worst impacts of the storm are shifting Northeast, roads will remain dangerous across much of the Southeast Monday, especially on overpasses and at higher elevations, Guy said.

Temperatures at or near freezing will keep roads slick in Knoxville, Tennessee, and Asheville, North Carolina, and areas to the north through central Ohio.

The governors of Virginia, South Carolina and North Carolina activated members of the National Guard to help with storm response.

"They're equipped with emergency response vehicles that can move through the snow," North Carolina Gov. Roy Cooper said of the 200 Guard members deployed in his state.

"As much as eight to 12 inches of snow has fallen in some counties, and significant icing is causing trouble in the central part of the state," Cooper said Sunday.

He said two people, both age 41 and from Myrtle Beach, SC, were killed Sunday morning on I-95 in Nash County after their vehicle traveled off the road and struck several trees in the median.

"Exceeding a safe speed for the conditions is the proximate cause of the collision," Knox said. "Weather at the time was a mixture of wintry precipitation."

In South Carolina, 120 service members were activated and many have been assisting stranded motorists, tweets from the South Carolina National Guard show.

And in Virginia, 75 service members were staged for storm response, including "personnel with chain saws for clearing fallen trees and heavy duty tactical vehicles capable of traveling through deep snow at key locations," the Virginia National Guard said in a news release.

Virginia State Police say the agency responded to nearly 1,000 traffic crashes and disabled vehicles across the state Sunday. The incidents were "mostly vehicle damage" and there were no reported traffic deaths, VSP said in a tweet.

"Potential for black ice tonight with the temperatures dropping down into the 20s, so please stay off the roads tonight and tomorrow, if at all possible. It's going to be very treacherous in a lot of parts of our state," the governor said on Twitter Sunday. "Also, the potential for downed power lines is very high right now. So, the less traffic we have on the roads the easier it is for our partners to clear the roads and restore power."

The winter storm treated some residents of the Florida panhandle to rare snow flurries Sunday. The National Weather Service in Mobile, Alabama, tweeted a Pensacola, Florida, resident's video of flurries at his home and traces were reported in nearby Walnut Hill.

But the system brought much more dangerous conditions to southwest Florida, where at least two tornadoes destroyed at least 28 homes in Lee County and damaged others, officials said.

At least 62 homes are currently "unlivable," said Cecil Pendergrass, co-chairman of the county's board of commissioners, at a news conference.

One twister was an EF2 tornado with maximum winds of 118 mph. It may have completely destroyed 30 mobile homes of the 108 mobile homes damaged near Fort Myers, according to a damage survey by the National Weather Service.

Four injuries were reported, but no one was taken to a hospital, officials said.

In Charlotte County, north of Fort Myers, an EF1 tornado with winds of 110 mph left behind a path of destruction, according to the weather service.

"A waterspout moved across Gasparilla sound near Boca Grande Causeway before then moved ashore as a short-lived tornado near Placida damaging at least 35 homes and a marina storage facility," the NWS said in a bulletin.

No one was injured, but some residents have been displaced, the Charlotte County government said in a tweet.