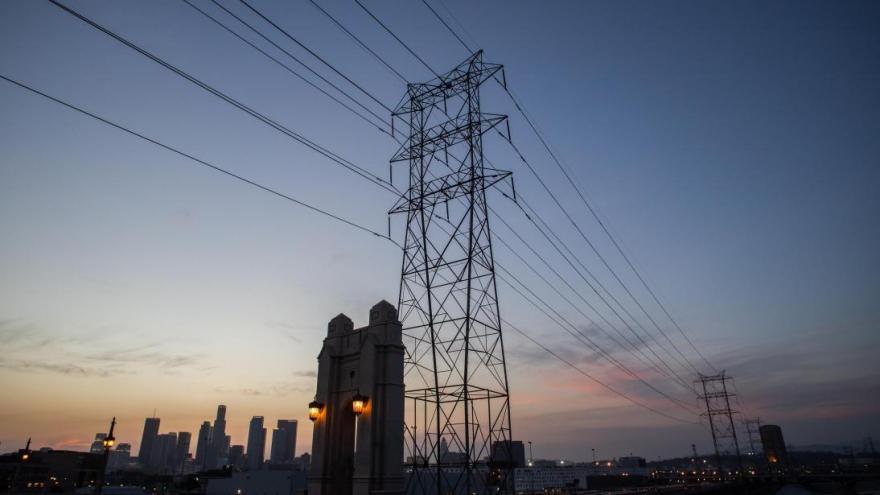 California's governor is demanding an investigation into the rolling blackouts that were implemented over the weekend during an intense heat wave, his office announced. Energy shortages led to California Independent System Operator (CAISO) issuing a Stage 3 emergency for the first time in 20 years.

(CNN) -- About 3.3 million California homes may lose power during rolling blackouts on Monday and the state's governor is demanding an investigation into the power outages.

The rolling blackouts were implemented over the weekend as an intense heat wave causes record temperatures across the state, including a high of 130 degrees in Death Valley on Sunday.

"We have a perfect storm going on here," said Steve Berberich, CEO of California Independent System Operator (CAISO), which manages most of the state's electrical grid.

But California Gov. Gavin Newsom criticized CAISO for implementing the blackouts with little notice and for being unprepared. He wants an investigation into the blackouts.

"These blackouts, which occurred without warning or enough time for preparation, are unacceptable and unbefitting of the nation's largest and most innovative state," Newsom wrote in a letter to CAISO, the California Public Utilities Commission and the California Energy Commission.

Energy shortages led CAISO to issue a Stage 3 emergency for the first time in about 20 years on Friday and Saturday. Heavy strain on the power grid meant that customers were asked to conserve as much energy as possible and some were subjected to rotating power outages.

One megawatt of electricity serves about 750 homes and the state is currently expected to have a shortfall of 4,400 megawatts during peak demand, Newsom said Monday.

This is the first time since 2001 the state has reached this level of energy demand, causing rotating power outages, according to Berberich.

Newsom said he found out about the blackouts just "moments" before they started. Operators of electrical grids were "caught flat footed, unable to avert disruptive blackouts and to adequately warn the public."

When CAISO issued Saturday's Stage 3 emergency, it cited the loss of a 470 megawatt power plant and a loss of nearly 1,000 megawatts from wind power.

California and other states were under an extreme heat warning over the weekend. Newsom declared a state of emergency on Monday, citing "widespread temperatures well in excess of 100 degrees throughout the state." The heat is forecast to continue for days.

The emergency measure frees up energy by allowing utilities to use backup energy sources to relieve pressure on the power grid.

Newsom asked the three organizations to provide updated forecasts for energy demand for the coming days and for any projected gaps between supply and demand.

Cooling centers are available in communities throughout the state, but capacity is limited due to social distancing protocols. Those who have tested positive for coronavirus or are exhibiting symptoms are not allowed.

CAISO is a non-profit corporation that manages the flow of electricity generated and transmitted by its member utilities across the electrical grid that serves 80% of California and a small part of Nevada.

CAISO urged Californians to lower energy use during peak hours, between 3 and 10 p.m. The company suggested ways to save energy like turning off unnecessary lights, closing your drapes, using fans, and if your health permits setting the thermostat to 78 degrees.

CNN has reached out to CAISO, California's Public Utilities Commission, the state's Energy Commission, and other utilities for additional comment.