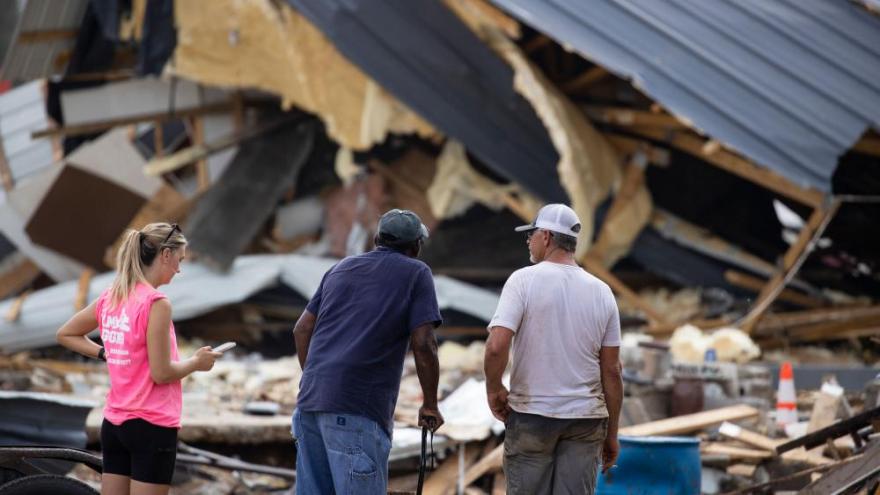 More than 270 homes in central Tennessee were destroyed in deadly flooding that killed 18 people and left three still unaccounted for days later.

A damage assessment conducted in Humphreys County showed 271 homes were destroyed by Saturday's flooding, according to a news release from the county's emergency management agency. Another 160 homes had major damage, and 28 had minor damage.

Middle Tennessee was smacked with heavy rain Saturday, leading to devastating flash flooding that ripped homes from their foundations and sent residents scrambling as it washed through communities. Up to 15 inches of rain fell over a six-hour period, officials said.

Humphreys County Sheriff Chris Davis took a helicopter ride Monday to survey the destruction and became tearful when he described what he saw.

Hundreds of homes are affected by the flooding in some form, David said. "We've got some folks that are in their homes that had knee-deep, waist-deep water, that now the water has receded," Davis said Tuesday.

To aid the catastrophic flooding, President Joe Biden approved a major disaster declaration, which will provide financial assistance to individuals and households to recover from the damages in Humphreys County, Gov. Bill Lee said Tuesday. Those impacted can apply to the federal Individual Assistance program.

As the floodwater started rushing Saturday through Humphreys County, Vanessa Yates saw water coming into her Waverly home, took her 4-month-old daughter in her arms and climbed on her kitchen counters.

"I just felt like I was going to drown," she told CNN. "It just happened so quickly."

"Everything was floating ... everything was under water," Yates recalled. "My ankles were actually covered with water at that point, and so I just put her at the highest level I could and just prayed to God that we would be OK."

As the water rose higher, Yates' brother-in-law, Alan Wallace, rushed to rescue her and the baby. He got his kayak as close as he could to the house and got out.

Wallace posted a video on social media as he waded through chest-deep water, saying, "If I die and don't make it, I tried. I love y'all."

He made it into to the home and rescued Vanessa and the baby with the boat.

Meanwhile, Thomas Almond and his 55-year-old mother, Linda Almond Bryant, were swept into the water from their home, he told CNN on Tuesday.

Almond and his mother were hanging onto a side of his house for 30 minutes as floodwater rushed around it, he said.

"And I came out over here, and I looked around, I screamed for my mom a couple times. But I didn't see her. And at that ... I knew I had to fight for myself."

The current took him around a bend to another building, where he climbed onto a roof and remained there four hours until he was rescued -- but his mother did not make it, he said.