More than 160 Confederate symbols came down in 2020, SPLC says 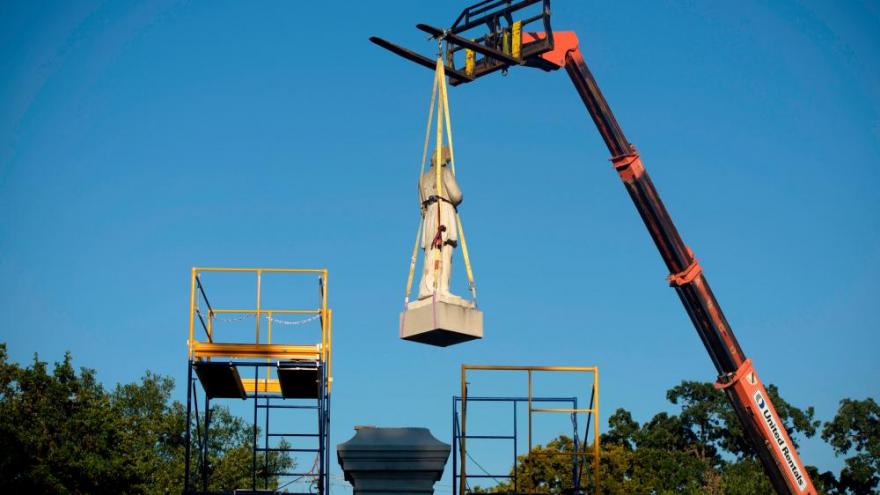 Workers in Houston remove a statue of Confederate soldier Dick Dowling from Hermann Park in June 2020. More than 160 Confederate symbols came down last year after the killing of George Floyd prompted a nationwide reckoning with racism.

(CNN) -- More than 160 Confederate symbols came down last year after the killing of George Floyd prompted a nationwide reckoning with racism.

That count comes from the Southern Poverty Law Center, which released new figures Tuesday as part of an update to a report that tracks public symbols associated with the Confederacy across the nation.

The Alabama-based civil rights advocacy group reported that 168 Confederate symbols were renamed or removed from public spaces in 2020, including one marker in Arizona that was stolen. That number refers not only to statues, flags and monuments but also city seals, official state holidays and names of schools, streets and other public spaces.

All but one of those symbols were taken down or changed after Floyd died at the hands of Minneapolis police officers in May, according to the SPLC. Just one removal happened before that: Virginia lawmakers passed a bill last February to replace Lee-Jackson Day, a holiday commemorating Confederate generals, with Election Day.

"2020 was a transformative year for the Confederate symbols movement," SPLC Chief of Staff Lecia Brooks said in a statement. "Over the course of seven months, more symbols of hate were removed from public property than in the preceding four years combined."

Virginia led the nation in removals

The presence of Confederate symbols in American public spaces has long been a contentious issue.

The conversation was revisited after Dylann Roof killed nine African Americans in 2015 in a Charleston, South Carolina, church and again after White nationalists marched in 2017 to protest the removal of a Robert E. Lee statue in Charlottesville, Virginia.

Scores of Confederate monuments and other namesakes started to come down in the years after those attacks.

Floyd's killing last year in a police encounter and the widespread protests over systemic racism that followed appeared to have renewed that momentum. A majority of Americans last year supported removing Confederate statues from public spaces around the country, according to a Quinnipiac University poll.

For many, Confederate symbols are painful memorials to White supremacy that must come down for the nation to move forward. Some who resist their removal say they mark history and honor heritage.

Of the 168 Confederate symbols that were removed in 2020, 94 were monuments, according to the SPLC. By contrast, 58 Confederate monuments were taken down between 2015 and 2019, the organization said.

Virginia saw 71 Confederate symbols removed last year, the most of any state. North Carolina was next, with 24 symbols coming down. Alabama and Texas each saw 12 symbols taken down.

More have continued to come down this year.

Two Confederate statues were removed in February from public locations in Georgia. One stone monument, inscribed with "1861-1865 Lest We Forget" and installed in 1993, was put into storage after being vandalized. Another statue of Confederate General Joseph E. Johnston was relocated from a city's downtown to a historical site.

But even as public opinion has shifted and more localities remove Confederate symbols from public spaces, many similar tributes continue to stand.

"Despite this progress, communities informed the SPLC about more than 300 Confederate symbols located across the United States that remain," Brooks said in the statement. "Many were located in the South, specifically Alabama, Georgia, Mississippi, North Carolina, South Carolina and Tennessee, where preservation laws prohibit communities from making their own decisions about what they want to see in their public spaces."

More than 2,100 Confederate symbols, including more than 700 monuments, remain publicly standing in the US, SPLC stated in its report.