More than 100 sheep stroll down empty Turkish road during lockdown 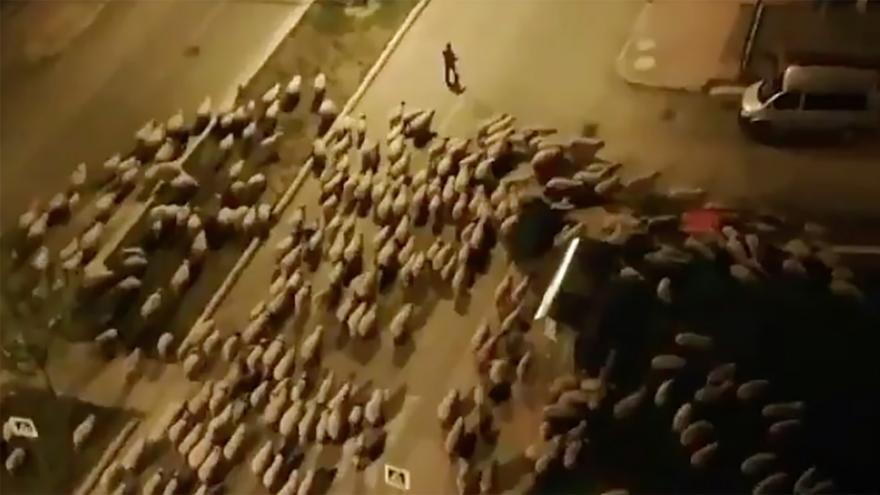 (CNN) -- Much of the world's population is confined to their homes during the coronavirus pandemic -- but animals aren't feeling sheepish about heading outdoors.

In the latest sighting, residents in a Turkish city were stunned to see a flock of sheep strolling down a usually busy road during the country's coronavirus lockdown.

People in Samsun, on Turkey's northern coast, filmed more than 100 of the animals ambling along an empty highway on Sunday.

The sheep appear to be accompanied by a shepherd and at one point stop an approaching car.

But they seemed to be fairly relaxed in their new surroundings, eventually making a ewe-turn to head down another road.

"When I went to bed to sleep, I heard voices approaching," Şeyda Sezgin, who filmed a viral video of the sheep, told CNN. "I couldn't make sense of it at first, and I was scared because there was a curfew."

"Two minutes later, there was a lot bigger herd. When I first saw the sheep, I thought it was a dream because we live in the center of the city," she added. "It's the busiest street in Atakum district."

Turkey is home to around 30 million sheep, according to the International Committee for Animal Recording (ICAR), making it one of Europe's major sheep and goat breeding nations.

But the country has been under intermittent lockdowns during the coronavirus pandemic, with animal populations taking advantage of the reduced human activity in built-up areas.

It's far from the only urban area to be invaded by four-legged tourists during the pandemic.

Lockdowns have resulted in goats breezing through a town Wales, lions sleeping on a road in South Africa, and sheep getting an order in at McDonald's.

Unlike most countries in Europe, Turkey has been imposing lockdowns at weekends and based on factors such as age.