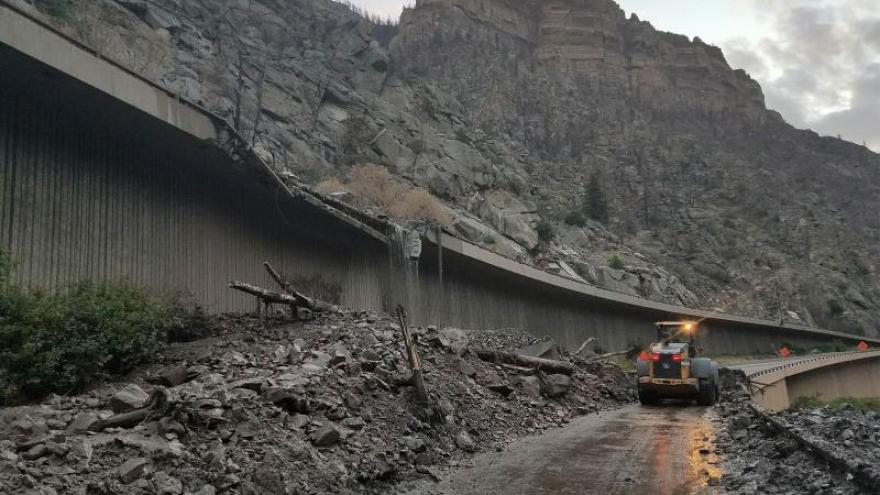 In this photo provided by the Colorado Department of Transportation, equipment works to clear mud and debris from the mudslide on I-70.

(CNN) -- More than 100 motorists were stranded after mudslides shut down a major interstate in Colorado, officials said Friday.

The incident occurred Thursday night after debris from the burn scars around the location of the Grizzly Creek Fire -- which burned more than 32,000 acres last August -- poured onto I-70 near the Hanging Lake Tunnel in Glenwood Canyon, according to the Colorado Department of Transportation (CDOT).

"CDOT staff at the tunnel assisted travelers who were trapped on I-70 by debris flows and sought shelter at Hanging Lake Tunnel; 29 motorists sheltered at the tunnel complex overnight. In total, CDOT has accounted for 108 individuals who have now been either evacuated from Glenwood Canyon or have been moved to a safe place," CDOT said in a news release.

Heavy rain has inundated the region over the past few days with frequent flash flood warnings. On Thursday night, after a second flash warning for Glenwood Canyon, "mudslides and debris reached I-70 within a few minutes," CDOT said.

It resulted in at least 29 vehicles stranded on the interstate. CDOT said it was "extremely confident" it had accounted for everyone in every vehicle.

The interstate will remain closed through the weekend due to the cleanup and because more rain is forecast for the area, CDOT said.

Glenwood Canyon is located about 156 miles west of Denver, Colorado.