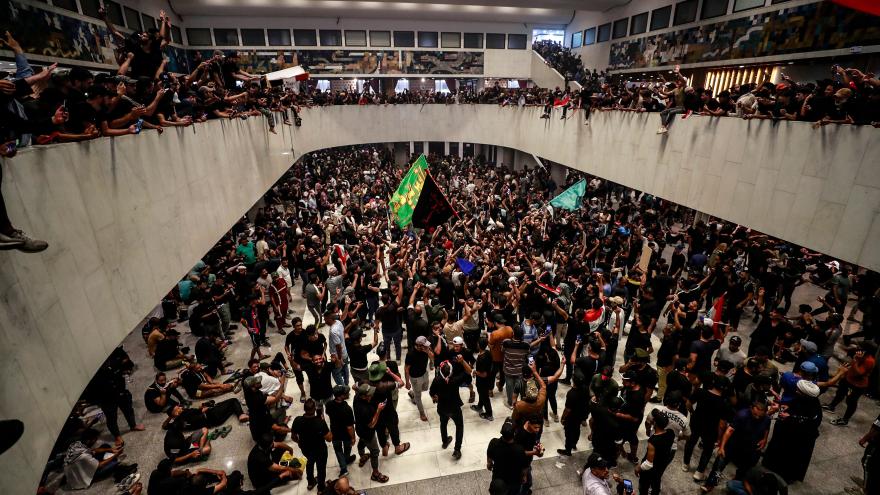 (CNN) -- More than 100 people have been injured in clashes in Baghdad on Saturday after protesters rallying against the nomination of a new prime minister managed to breach the Iraqi capital's heavily fortified Green Zone for the second time this week.

Crowds of angry demonstrators loyal to the powerful cleric Muqtada al-Sadr have broken into the secure area where government buildings are located despite security forces using tear gas and water cannons to disperse them.

The protesters then stormed the parliament, according to Iraqi State News agency (INA). Videos circulating on social media appeared to show people waving the Iraqi flag walking past security through the doors of parliament.

At least 125 people have been injured, including 100 civilians and 25 military personnel, according to the country's Ministry of Health.

"Voices of reason and wisdom are critical to prevent further violence. All actors are encouraged to de-escalate in the interest of all Iraqis" UNAMI said in a tweet.

Outgoing Prime Minister Mustafa al-Kadhimi urged the protesters to be "calm, patient, and rational," in a televised speech on Saturday.

"We must all cooperate to stop those who accelerate this problem, and everyone must know very well that the fire of sedition will burn everyone," Kadhimi said.

The protests began after Mohammed Shiya al-Sudani was formally nominated to lead the country on Monday by the Coordination Framework, the largest Shiite alliance in the Iraqi parliament.

His nomination followed the mass resignation of al-Sadr's parliamentary bloc, a group of over 70 lawmakers who withdrew from the governing body last month in an apparent show of force after months of political stalemate.

Iraq has struggled to form a new government since parliamentary elections in October; Sadr's own attempts to form a government have previously foundered amid opposition from rival blocs.

"If the Sadrist bloc remaining [in parliament] is an obstacle to government formation, then all lawmakers of the bloc are honorably ready to resign from parliament," Sadr said in a televised speech in June.

The cleric, who positions himself as against both Iran and the United States, is immensely popular. His bloc's success in the October vote threatened to sideline Iran-aligned Shiite blocs that have long dominated the oil-rich country's politics.

On Wednesday, al-Sadr told protesters at the parliament building that their "message" had been received and that they should return home.

"A revolution of reform and rejection of injustice and corruption. Your message has been received. You have terrified the corrupt. Pray, and return home safely," he tweeted.

The outgoing government of Prime Minister al-Kadhimi also issued a statement calling on the Sadrist protesters to "to immediately withdraw from the Green Zone," preserve public and private properties and to abide by the instructions of the security forces.

"The security forces will be committed to protecting state institutions and international missions, and preventing any disturbance of security and order," al-Kadhimi added.