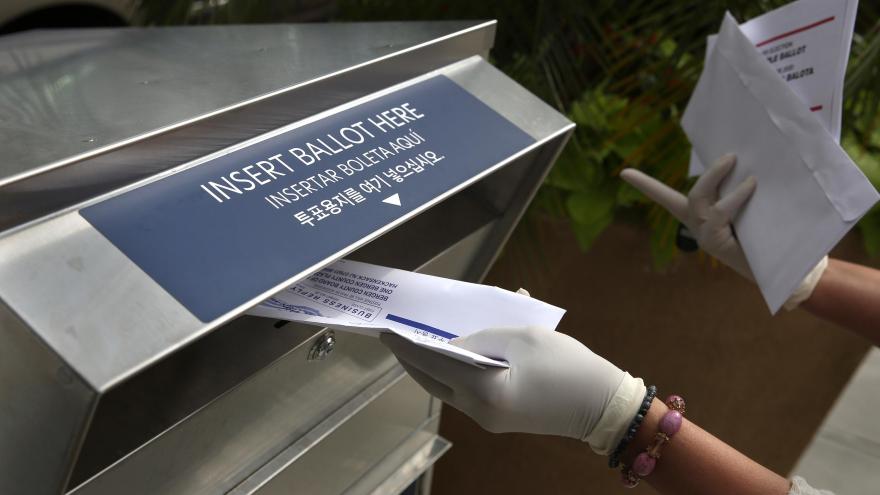 Jacob Blake was shot seven times in the back as an officer tried to detain him this week in Wisconsin. In this photo, Blake is seen with his four sons.

The Illinois State Board of Elections said 1,111,387 mail ballot applications have been received to date, adding that this number "likely is lower than the true total," given data has not yet been reported from 28 Illinois election authorities.

The high volume of requests sets Illinois on track to outpace its mail-in voting record from the last general election, where approximately 370,000 votes were cast by mail in 2016.

Voting by mail and early voting have become increasingly popular options among voters who wish to avoid showing up to the polls in person on Election Day during a global pandemic.

A recent CNN poll conducted by SSRS found that a majority of voters prefer to cast their ballots before Election Day, far more than have ever done so in previous presidential elections. Thirty-four percent of registered voters said they prefer to vote by mail in the presidential election, 22% said they want to vote early at a polling place and just 43% said they would prefer to vote in-person on Election Day, according to the poll.

"We are encouraged by the strong response to the ongoing vote-by-mail effort," State Board of Elections Executive Director Steve Sandvoss said in a statement. "Voting by mail provides a safe, secure and convenient voting option for those concerned about COVID-19. It also will help ease congestion at in-person polling places during early voting and on Election Day."

Democratic Gov. J.B. Pritzker signed legislation earlier this summer authorizing local election officials to send vote-by-mail applications to Illinois voters who had participated in the 2018 general, 2019 consolidated or 2020 primary elections. The state elections board announced Friday that 6.4 million applications were ultimately sent to those voters.

Illinois voters still have over two months to submit their requests for mail-in ballots, although election officials are encouraging voters to apply earlier than the deadline to allow for sufficient delivery time. Requests by mail must be received by October 29, and in-person early voting requests must be made by November 2, according to the board's website.