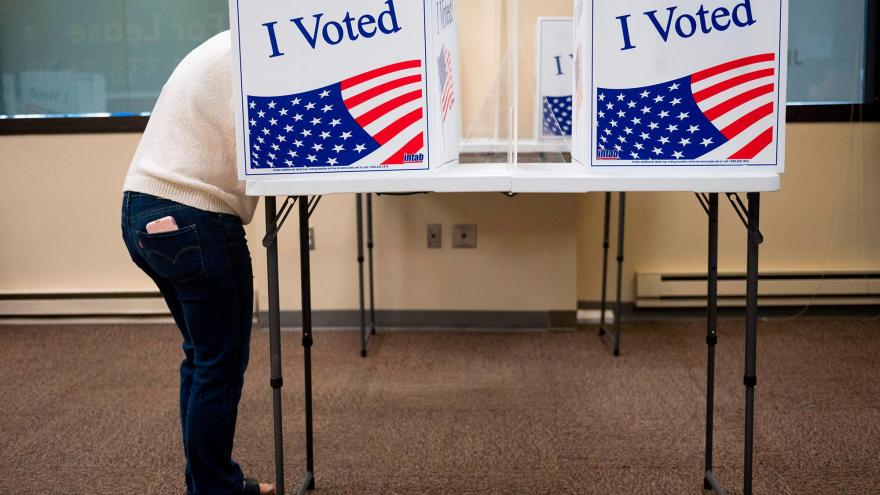 More than 1.2 million Americans have already cast their presidential ballots without waiting for the first scheduled debate Tuesday between President Donald Trump and former Vice President Joe Biden in Cleveland, according to a CNN survey of election officials in 20 states that are making return data available.

(CNN) -- More than 1.2 million Americans have already cast their presidential ballots without waiting for the first scheduled debate Tuesday between President Donald Trump and former Vice President Joe Biden in Cleveland, according to a CNN survey of election officials in 20 states that are making return data available.

About 800,000 of those ballots cast come from eight of CNN's most competitive-rated states. In North Carolina and Wisconsin alone, more than 500,000 ballots have already been cast -- roughly a quarter of ballots requested.

The high return rate suggests many voters have already made up their minds, and they're heeding the advice from politicians and election officials who are urging people to return their ballots quickly due to concerns of delays in mail delivery.

These votes represent what will ultimately be a small fraction of the votes cast this year. Trump and Hillary Clinton received about 130 million votes combined in 2016. The majority of states are not yet reporting early ballot returns or have not sent ballots out domestically.

Yet it also demonstrates an eagerness to vote, in a year when more Americans than ever will cast early ballots because of the pandemic.

Around the US, more than 30 million ballot requests have been made -- predominantly for mail-in ballots -- in the 36 states currently reporting. Another 43 million ballots have been or will soon be mailed to voters in the nine states -- along with Washington, DC -- that are automatically mailing ballots to eligible voters.

The data show a sharp Democratic advantage in early requests. Overall, registered Democrats have requested about 6.5 million ballots, trouncing the more than 3.8 million ballot requests from registered Republicans in the 11 states releasing party data. That's not necessarily an indicator of the ultimate outcome, especially since recent polling shows Trump supporters strongly prefer to vote in person on Election Day.

North Carolina's almost 1.1 million ballot requests are 10 times the number the state had received at this point in 2016.

North Carolina Democrats hold a significant lead over Republicans in ballots returned so far. Of the more than 275,000 ballots already cast, Democrats account for more than 53% of those ballots, despite comprising over 35% of the state's registered voters. By comparison, Republicans account for more than 16% of ballots cast so far but only about 30% of registered voters in the Tar Heel State.

Demand for mail-in ballots in the Sunshine State, a key battleground, continues to rise, as ballot requests from active registered voters surpassed 5 million as of Tuesday.

In Michigan, another key swing state, about 28,000 people have voted in less than a week since mail ballots first went out and in-person early voting began. "Already 2.5 million Michigan citizens have requested to vote from home in this fall's election, a 350% increase from 2016 when the number was 700K," Secretary of State Jocelyn Benson tweeted Tuesday.

"We are making it easier than ever for registered Ohio voters to make their voice heard," Secretary of State Frank LaRose said Tuesday. "Every voter choosing to cast their ballot from the comfort of their own home makes for an even smoother voting experience for those choosing to vote in-person on Election Day. It's a win-win for everyone."