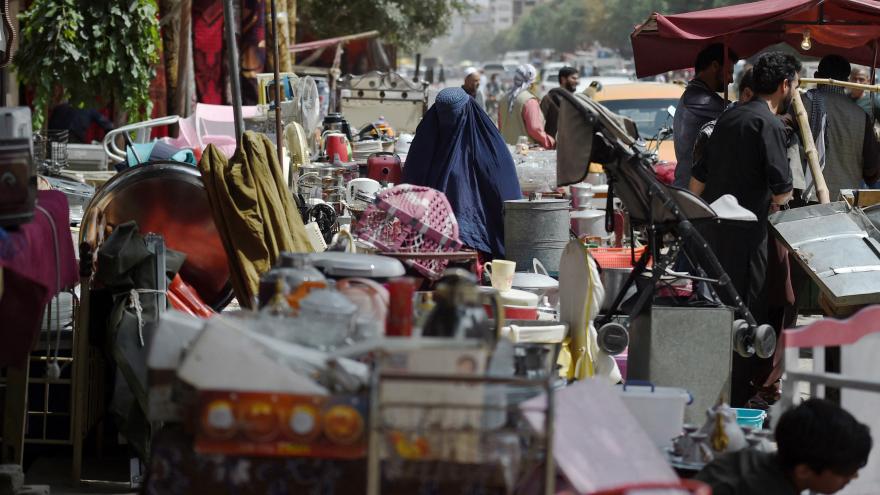 (CNN) -- More than $1 billion in aid has been pledged for Afghanistan to help ease one of the world's "worst humanitarian crises," as millions of people in the country could soon run out of food and the economy is on the verge of collapse, the United Nations said on Monday.

Speaking at a high-level ministers meeting on the crisis in Geneva, UN Secretary General António Guterres said poverty rates in Afghanistan had spiraled since the Taliban's takeover last month, with one in three people not knowing where their next meal was coming from and basic public services not functioning.

"The people of Afghanistan need a lifeline. After decades of war, suffering and insecurity, they face perhaps their most perilous hour," Guterres said.

The UN had made an emergency appeal for $606 million to meet the most pressing needs in the country, a request that had been "fully met," Guterres said during a news conference.

"Today, we already have clearly more than $ 1 billion of pledges. It is impossible to say how much of these will be for the flash appeal, but in any case, it represents a quantum leap in relation to the financial commitment of the international community towards the Afghan people," he said.

Even before the Taliban's return to power, protracted conflict, poverty, back-to-back droughts, economic decline and the coronavirus pandemic had worsened an already dire situation in which 18 million Afghans -- almost half of the population -- were in need of aid, UN agencies said. More than half of children under five years old are facing acute malnutrition and fighting has forced hundreds of thousands of people from their homes, they added.

With winter now approaching, many people could run out of food by the end of the month, the UN chief said.

The World Food Program, which on Sunday brought its aid workers back to the capital Kabul for the first time since the takeover, said 14 million people were on the "brink of starvation."

Food prices have risen, cooking oil has doubled in price and 40% of the country's wheat crop this year has been lost, WFP's executive director, David Beasley, said.

Children are suffering disproportionately from the multiple crises. Without immediate action, the humanitarian catastrophe will deteriorate further and 1 million children risk starving to death, according to the UN children's fund (UNICEF). Already, nearly 10 million girls and boys depend on humanitarian assistance to survive.

Meanwhile, Afghan doctors are warning of the imminent collapse of the healthcare system, as hospitals and clinics run short of resources and health providers have their funding paused by international donors, according to HealthNet TPO, an NGO that runs a network of hospitals and health centers in the country.

"The people of Afghanistan are facing the collapse of an entire country -- all at once," Guterres said in his speech.

However, he warned "humanitarian aid will not solve the problem if the economy of Afghanistan collapses," which could trigger a "massive exodus" that would threaten the stability of the region.

"My appeal to the international community is to find ways to allow for an injection of cash in the Afghan economy, allowing the economy to breathe and avoiding a collapse that will have devastating consequences for the people of Afghanistan," Guterres said.

During his speech, Guterres said the UN had received a letter from the Taliban guaranteeing aid workers safe access to the country. He said it was impossible to provide humanitarian assistance inside Afghanistan without engaging with the Taliban.

However, there are mounting concerns as to whether the Taliban can be trusted, and whether aid can get to the Afghans who need it, and not end up in the wrong hands.

Women have been ordered to stay at home, have been prohibited from going out in public without a male chaperone, and women and girls have had their access to education limited, with girls over the age of 12 barred from going to school in several areas, she said.

"The country has entered a new and perilous phase," she said. "In contradiction to assurances that the Taliban would uphold women's rights, over the past three weeks, women have instead been progressively excluded from the public sphere."

USAID noted that the environment in Afghanistan will need to be "conducive to the principled delivery of aid, including the ability for both female and male aid workers to operate freely" in order for the aid to be effective.