More than 1,000 guns seized from a home in upscale Los Angeles neighborhood 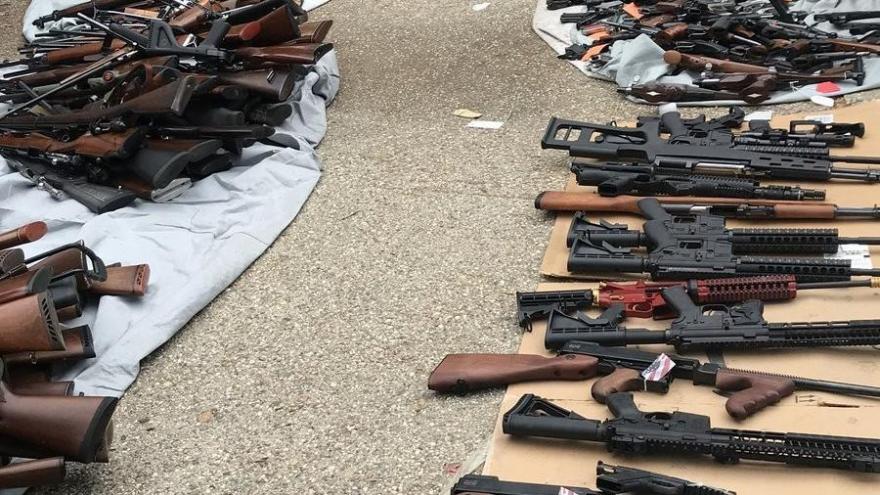 Images of the guns and ammunition found in a Los Angeles home. LAPD has made an arrest.

(CNN) -- More than 1,000 guns were found in a home in the upscale Los Angeles neighborhood of Holmby Hills, but authorities said there was no indication they were used in crimes.

"At this time, there is no indication they were, but that could change as the investigation continues," Ginger Colbrun, spokeswoman for the Bureau of Alcohol, Tobacco, Firearms and Explosives, said Thursday. Authorities will trace all the weapons, she said.

Police also searched a home about 15 miles away, near Chinatown, the source said.

Police arrested Girard Saenz, 57, at the first house over allegations of violating California's law regarding assault weapons and .50 Browning Machine Gun rifles, Los Angeles police Lt. Chris Ramirez said. The law prohibits the manufacture, distribution, transportation, importation and sale of any assault rifle or .50 BMG rifles, except in specific circumstances, according to the California Legislature.

No formal charges have been filed.

The complaint that led to the arrest involved the sale of firearms, but the investigation remains ongoing, Ramirez said, and more charges, including federal counts, are possible.

Police didn't release any more information about the arrest, but the law enforcement official said they have not found any evidence linking Saenz to terrorism.

In aerial footage from the scene, hundreds of guns are seen scattered on what appears to be blankets in the driveway. The weapons range from handguns to rifles. Police can be seen taking inventory.

The ATF's Colbrun said in a written statement that authorities were anonymously tipped off that someone was "conducting illegal firearms transaction outside the scope of the federal firearm license" that the suspect possesses. Along with the weapons, firearm manufacturing equipment and tools were also found at the home.

In 2015, Los Angeles police seized 1,200 guns, seven tons of ammunition and $230,000 in cash from a home. The owner had died of natural causes and was found in his SUV. At that time it was considered one of the largest seizures of weapons from one home, Los Angeles police said.