More parents could have access to baby formula from abroad 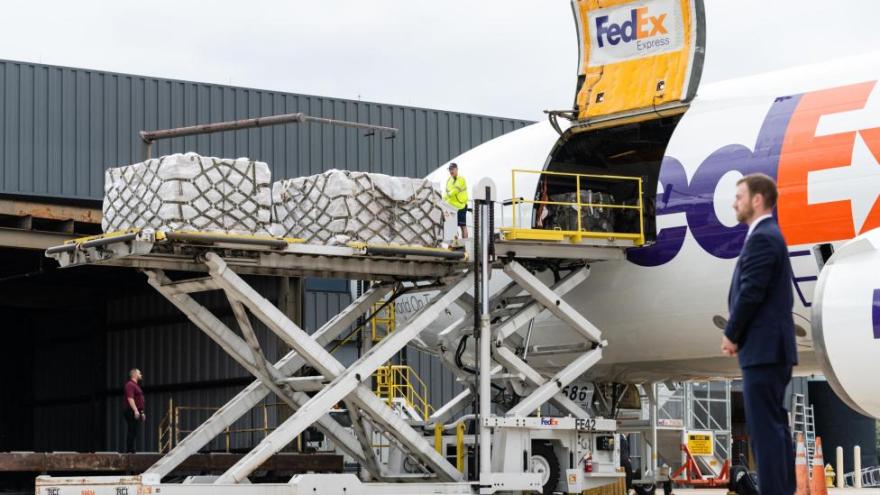 (CNN) -- The Biden administration is making it easier for low-income families to obtain baby formula being imported from abroad to alleviate the shortage plaguing parents from coast to coast.

The US Department of Agriculture announced Monday that it is offering nationwide waivers so that families with federal WIC benefits can access formula that's not normally approved for use in the program. The products are coming from other countries as part of Operation Fly Formula, which the administration launched last month in the wake of a massive recall of Abbott Nutrition baby formula in February.

The agency is leveraging new authority from the Access to Baby Formula Act that Congress recently passed to offer the waivers.

Earlier Operation Fly Formula missions delivered formula products that have already been available in the US, so they already meet the standard for WIC, formally known as the Special Supplemental Nutrition Program for Women, Infants, and Children.

About half of the infant formula in the US is purchased by those using federal WIC benefits, which allow them to obtain the formula for free but restrict what type, size and brand they can select. Some 1.2 million infants are in the program.

This latest step builds on the USDA response to the recall and ensures WIC benefits can be expanded to include new, imported formulas, said Brian Dittmeier, senior director of public policy at the non-profit National WIC Association.

"As Operation Fly Formula bolsters supply in the short term and brings peace of mind to parents nationwide, we cannot lose sight of the structural reforms that are needed to safeguard against a failure like Abbott's, build a resilient manufacturing sector and center the needs of the nation's most vulnerable infants," he said.

Getting infant formula to parents

The Biden administration is making multiple moves to try to get baby formula into the hands of parents after Abbott's recall, which exacerbated shortages caused by ongoing supply chain issues.

The government has airlifted tons of formula from other countries since last month. The administration announced a fifth flight Monday that will bring the equivalent of about 1.6 million 8-ounce bottles of Nestlé infant formula to Fort Worth, Texas, from Cologne, Germany, this week.

Also, Abbott has reopened the factory at the center of the recall, which produces almost half the powdered formula sold in the US. But it could take weeks for it to ramp up to its regular supply levels.

Abbott is the exclusive formula provider for about half of the infants in WIC.

The USDA has already provided waivers to states to give parents using WIC benefits a wider array of options. Authorized since February, the waivers allow families to purchase alternate container sizes, including those that exceed typical maximums, and forms of formula, as well as to buy alternate brands without doctors' notes. The flexibilities enable parents to get liquid concentrate or ready-to-eat formula, rather than just powdered.

A third type of waiver allows stores to accept exchanges of formula purchased with WIC benefits.

The USDA has approved well over 250 state waiver requests, the agency said Monday. Every state now offers at least one waiver.

North Carolina and its contracted formula manufacturer, Nestlé Gerber, are the first to have put the increased flexibility into action by agreeing to a contract modification that expands access to formula for WIC participants in the state, the USDA said Monday. It allows them to choose different sizes, types and brands of formula.

Formula remains in short supply in many places, however.

WIC program managers told CNN late last month that they're still receiving a steady stream of calls from families who can't find formula. Rural areas that lack grocery stores seem to be struggling most, even in states that have generally seen fewer shortages.

The 49 US states and territories that contract with Abbott for WIC formula also seem to have had bigger shortages for a longer time than those that contract with the two other major formula companies, Mead Johnson Nutrition, a Reckitt subsidiary, and Nestlé, which makes Gerber brands.

In Michigan, which contracts with Abbott, about 85% of formula-fed WIC participants are affected by the recall and shortage, said Lynn Sutfin, press officer with the Michigan Department of Health and Human Services.

Illinois WIC Director Stephanie Bess said that state had been "in pretty good shape" at the beginning of the national shortage because it has a formula contract with Mead Johnson. Only about 1,000 families were affected at the start of the shortage, but in the past few weeks the office has seen a significant increase in calls from caregivers who can't find formula.