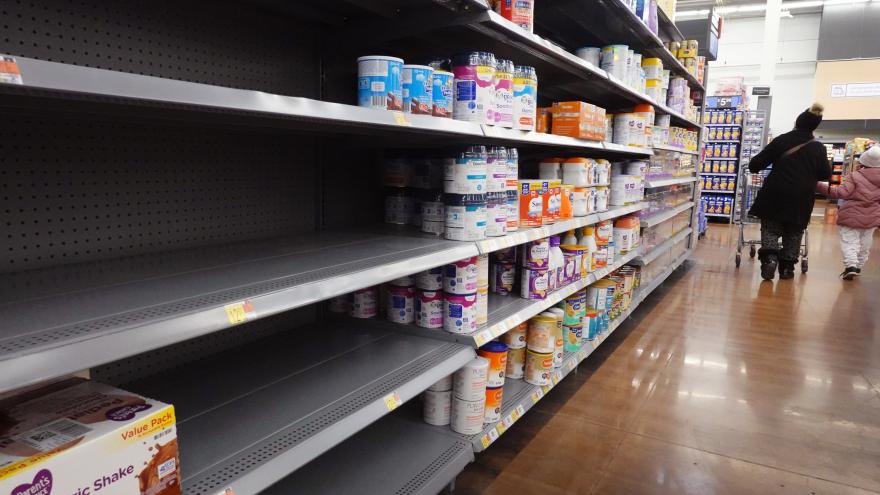 (CNN) -- More infant formula from abroad is on its way to the US as part of the government's Operation Fly Formula program, including shipments next week from the UK and Australia.

The infant formula is expected to be available for parents to purchase in the coming weeks, but many store shelves remain empty amid a shortage driven by supply chain issues and product recalls.

The Kendamil formula will be distributed through US retailers in stores and online. The first shipment will be available at Target stores in the coming weeks, the White House said.

Additionally, an Australian formula manufacturer expects to ship about 250,000 cans to US stores next week in two planeloads, according to Kristy Carr, CEO and founder of Bubs Australia. The White House said Wednesday that flights of baby formula will take off from Australia on June 9 and June 11 and will arrive in Pennsylvania and California, respectively. The flights will include the equivalent of about 4.6 million 8-ounce bottles.

"We would hope that at least some of the retail [stores] will have our products within days of landing," Carr said. "The retailers are just as keen to work with us and the Biden administration task force to ensure this happens."

Last weekend, Nestle sent more than 38,000 cans of Gerber Good Start Extensive HA formula to one retailer, but the company would not name the retailer or say whether it was available for purchase.

CNN found the product on Walmart's website and on Gerber's website, but it was unclear how much was available.

Carr and Tarun Malkani, CEO of Gerber, are among executives from five infant formula companies to meet with President Biden on Wednesday afternoon to discuss their progress on ramping up the supply of formula for the US.

"We want to make sure we have coverage right across the country. We're going to be prioritizing the areas that are in most need and vulnerable communities," Carr said.

In "a week or a few weeks," Bubs plans to send another approximately 250,000 cans in two more planeloads, Carr said.

Then, "in the coming weeks and months," the company will send another 750,000 cans of formula, for a total of 1.25 million cans of six types of formula for children through 1 year of age, she said.

There are moves to increase formula production in the United States, too.

Abbott Nutrition said last week that it plans to restart work at its Sturgis, Michigan, plant on June 4, months after it was shut down. During inspections that spanned January, February and March, US Food and Drug Administration investigators found Cronobacter sakazakii bacteria in several areas inside the plant, and several types of formula were recalled.

Once the plant resumes operation, the first batches of new formula are expected to be available to consumers around June 20. The plant will start with specialty metabolic formulas, with other kinds to come later.

For now, parents are still struggling to find formula.

Datasembly, a firm tracking market trends, reported that 70% of formula products were out of stock at some point during the week ending May 22. The estimates found stock rates to be worse than the week before.

CVS spokesman Matt Blanchette told CNN on Tuesday that "our situation has not changed" since last week, and an executive of a supermarket chain in New England said it could be several months before there is any change to the supply in infant formula on store shelves.

"With the delay in reopening the [Abbott Sturgis] plant, we hear it will be six to eight weeks; however, when filling the pipeline, especially with the current labor situation and trucking issues, we know that it's likely to be three or four months before we get back to more regular stock conditions," said Robert Rybick, president and CEO of Geissler's Supermarkets, which has seven locations in Connecticut and Massachusetts.

Most of the Nestlé shipments under Operation Fly Formula last week went to hospitals, home care companies and WIC programs, according to a Nestle spokesperson, who did not say whether the product had arrived at the destinations.