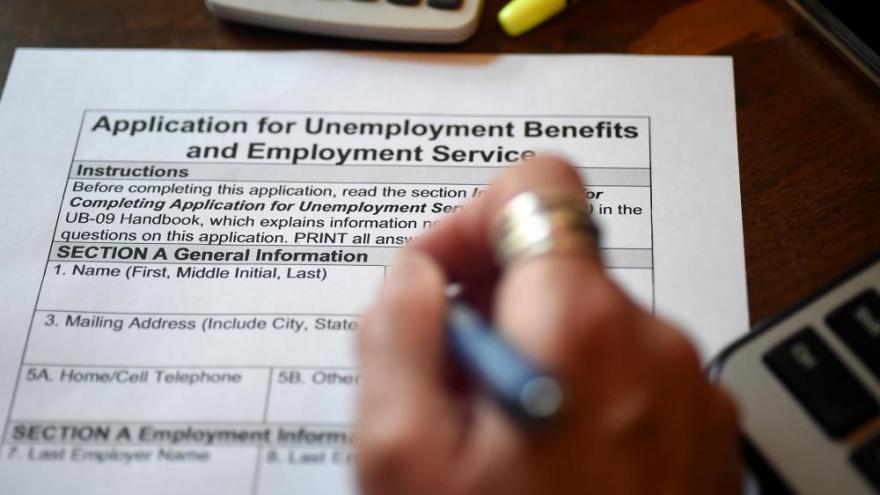 (CNN) -- Jobless residents of Maryland and Texas have filed lawsuits in state courts seeking to force their governors to reinstate pandemic unemployment benefits.

They join an effort begun by out-of-work Indiana residents, who have yet to see their payments restart despite a court ruling last week ordering the state to continue the benefits.

A judge in Maryland issued a temporary restraining order on Saturday morning requiring the state to continue paying the benefits that were set to end that day.

The three states are among the 26 states that are terminating early at least one of the three pandemic unemployment insurance programs Congress enacted in March 2020 and extended twice to support people during the coronavirus-fueled economic downturn.

In addition to the $300 weekly supplement, the federal programs provide benefits to freelancers, the self-employed, independent contractors and certain people affected by the coronavirus and to those who have exhausted their regular state benefits.

Some 4.1 million Americans will be affected, according to The Century Foundation.

Share your story: How is the early end of pandemic unemployment benefits affecting job hunting in your state?

Citing workforce shortages, the governors argue the expanded benefits are keeping the unemployed from accepting job offers -- though there is not much evidence showing that more people are rejoining the labor market after their benefits stop. The payments ended on June 19 in Indiana and June 26 in Texas.

The three pandemic unemployment programs are scheduled to expire in early September in the states that are continuing them, under a provision contained in the Democrats' $1.9 trillion relief package that President Joe Biden signed into law in March.

Terminating the benefits early will make it harder for the unemployed to afford basic needs, including housing and health care, at a time when many are still struggling to find work. More than 300,000 Maryland residents will be affected by the cessation of the programs, with 85% of them losing all their benefits, according to one of the lawyers.

Hogan's attorney countered that the governor was balancing the needs of employers, workers and all Maryland residents at a time when the economy is reopening and that the statute does not require him to accept the federal benefits.

In his temporary restraining order, Baltimore City Circuit Court Judge Lawrence Fletcher-Hill directed state officials to rescind their notice to the US Department of Labor terminating the pandemic benefits and take all action necessary to continue the payments.

"At this preliminary stage, the court concludes that plaintiffs have shown a likelihood that they will succeed in establishing that the 'fullest extent' provision requires the secretary of labor, without discretion, to draw available benefits from the federal government if providing them to Maryland residents is consistent with the Maryland unemployment benefit system," Fletcher-Hill wrote.

"There is a record number of jobs available right now, and this program is making it harder to fill them and fully reopen our businesses," Ricci said. "It's hurting our recovery across every region and industry."

Meanwhile, in Texas, two groups of unemployed residents are arguing that the state constitution doesn't give Gov. Greg Abbott, a Republican, the power to terminate the benefits, even during a state of emergency, said David Sibley, attorney for the plaintiffs. Only the Texas Workforce Commission, which administers the state unemployment program, can do so, Sibley continued.

Nearly 980,000 Texans have been affected, according to The Century Foundation.

Abbott's spokespeople did not return a request for comment.

No benefits in Indiana

A state judge ruled last week that Indiana must continue paying pandemic unemployment benefits to roughly 230,000 Hoosiers. But there's been no indication that the state Department of Workforce Development has complied with that order, according to Jennifer Terry, a staff attorney with Indiana Legal Services, one of the two firms representing the plaintiffs.

Jobless workers filed a lawsuit last month, arguing that the move violates a state law that requires Indiana to "procure all available federal insurance benefits to citizens," according to the firms.

In its response, the state said that Indiana law does not require the governor to enter into agreements with the federal government to secure all unemployment benefits. Also, the plaintiffs "downplay dramatically" what it would take the restart the payments, which would entail reentering a contract with the US Department of Labor, reprogramming the state unemployment agency's computer system and redetermining eligibility of claimants.

Spokespeople for the state agency and Republican Gov. Eric Holcomb did not return requests for comment.

But the agency told the IndyStar earlier in the week that it is "determining how to proceed because the federal programs no longer exist after their termination on June 19. There is no action that a claimant needs to take right now. Updated information will be provided on DWD's website."