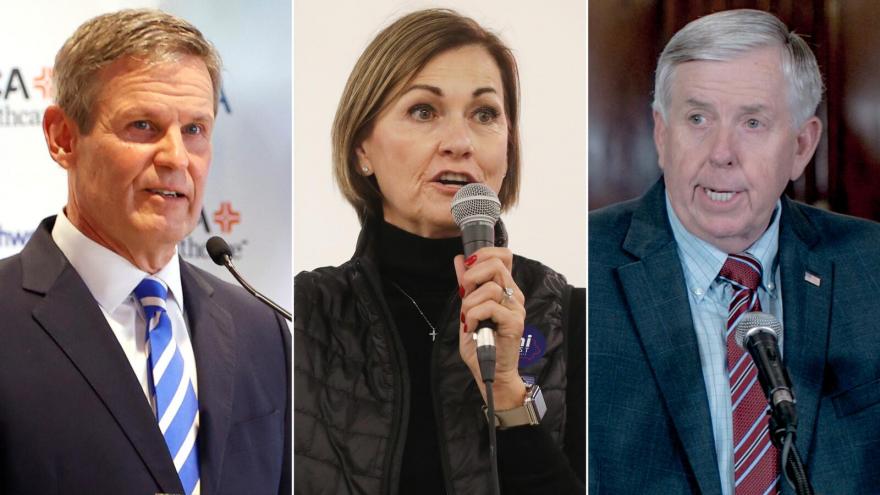 Jobless residents in Missouri, Iowa, Idaho, Tennessee, Wyoming, South Dakota and Utah join those in several other states who will soon lose the $300 weekly federal boost to their state benefits, though Congress has made it available until early September to those in states that continue to participate. The moves will also end the federal expansion of jobless benefits to freelancers, independent contractors, certain people affected by the virus and those who have run out of their regular state benefits.

"While these benefits provided supplementary financial assistance during the height of Covid-19, they were intended to be temporary, and their continuation has instead worsened the workforce issues we are facing," said Gov. Mike Parsons of Missouri, which has an unemployment rate of 4.2%. Benefits there will cease on June 12. "It's time that we end these programs that have ultimately incentivized people to stay out of the workforce."

These states join Montana -- which last week was the first to announce it was pulling out -- along with South Carolina, Arkansas, Alabama, Mississippi and North Dakota. Other red states are likely to follow.

The withdrawals, which are allowed under the terms of the historic expansion of the nation's unemployment benefits system enacted by Congress in March 2020, deepen the divide over safety net programs available in red versus blue states -- much like the ongoing partisan battle over Medicaid expansion under the Affordable Care Act. A dozen red-leaning states have yet to provide expanded Medicaid benefits, and two states have yet to implement voter-approved expansions.

The terminations are also likely to widen the split between Republican officials and business owners on one side and Democrats and workers on the other. The former argue that the more generous payments are keeping Americans from returning to the labor market. They point to the growing shortage of workers as evidence that people would rather stay home than accept job offers.

Tennessee's job board has more than a quarter million postings. The state's unemployment rate is 5%, which is lower than the national rate of 6.1% but higher than some other states. Benefits will end on July 3.

"We will no longer participate in federal pandemic unemployment programs because Tennesseans have access to more than 250,000 jobs in our state," said Gov. Bill Lee. "Families, businesses and our economy thrive when we focus on meaningful employment and move on from short-term, federal fixes."

"We see signs that demand for labor is strong but that supply could be limited," wrote Daniel Silver, an economist at JPMorgan.

Democrats and workers, however, argue that millions of people remain out of work and cannot return easily because their children are still learning remotely or they remain concerned about the coronavirus.

The economy is still down 8.2 million jobs compared with February 2020, and it added a scant 266,000 positions last month, a major disappointment. Nearly 4.2 million people have been out of work for at least six months -- and it's harder for them to return to the labor market.

President Joe Biden, while warning Monday that people who can work must accept offers or lose their benefits, said most Americans want to be employed if possible.

"We still have 8 million fewer jobs than we did when the pandemic started," he said Monday. "And for many of those folks, unemployment benefits are a lifeline."

The Democrats recently extended the pandemic unemployment programs until early September as part of their $1.9 trillion coronavirus rescue package.

Whether ending benefits early will address the scarcity of workers remains to be seen.

The states' decisions will force some people back into the labor market, but that will not resolve all the workforce shortages, said Gregory Daco, chief US economist at Oxford Economics. Some people cannot return because they are still contending with virus-related child care issues or health concerns.

"It's not because you end unemployment benefits that everybody will find a job," said Daco, noting that the terminations will do more harm than good because some residents can't return to work at this time. "It's simply not the case, because we are not in a pre-pandemic environment."

This story has been updated with additional states announcing termination of benefits.