Monarch butterflies could become extinct if we don't take these 3 steps, experts say 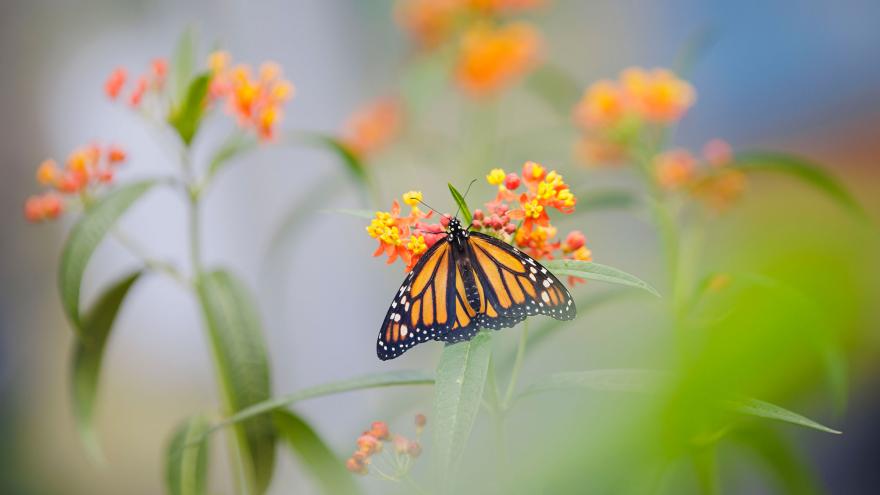 (CNN) -- One of the most popular and recognizable insects is at risk of extinction, according to a global organization focused on conservation and sustainability.

The International Union for Conservation of Nature has added the migratory monarch butterfly to its Red List of Threatened Species as endangered, the group said in a release Thursday.

"It is difficult to watch monarch butterflies and their extraordinary migration teeter on the edge of collapse, but there are signs of hope," said Anna Walker, a species survival officer for invertebrate pollinators at the New Mexico BioPark Society who works in partnership with the IUCN Species Survival Commission.

The monarch is the only butterfly known to make a two-way migration like birds, according to the US Forest Service. Every winter, monarchs that live in the eastern part of North America migrate to the Sierra Madre mountains in Mexico, and those in the west migrate to the coastal regions of California, according to the federal agency. Those migrations have been a spectator event in the past.

The IUCN Red List shows what actions need to be taken to save nature from extinction and is a resource often cited in peer-reviewed scientific research, according to its website. The list is not related to the US Endangered Species Act, and currently the US Fish and Wildlife Service has not listed the monarch butterfly as endangered.

CNN has reached out to the Fish and Wildlife Service.

The IUCN estimates the native population of monarch butterflies has shrunk by between 22% and 72% over the past decade, and the western population has declined by 99.9% between the 1980s and 2021 -- putting it at the greatest risk of extinction.

Habitat loss and the climate crisis

Destruction of habitat and rising temperatures fueled by the climate crisis are increasingly threatening the species, the IUCN said.

When they are caterpillars, monarchs feed exclusively on the leaves of milkweed, according to the National Wildlife Federation.

But droughts have limited the growth of milkweed, and increased temperatures have triggered earlier migrations, the IUCN said. There has also been an increase in the use of glyphosate herbicide -- particularly on corn and soybean crops -- that has caused a severe milkweed decline in the United States.

Scientists had been hopeful that the monarch would be able to withstand the human-induced climate crisis, given its exceptionally large geographic range, but the species has been found to be highly dependent on environmental cues for critical life cycle events, according to the World Wildlife Fund.

The butterfly's reproduction, migration and hibernation interlock with seasonal changes, which global warming is disrupting.

Hope for the butterflies

But it's not too late to protect monarch butterflies, experts say.

"Fortunately, there is still time to act," conservationist Scott Hoffman Black told CNN. Black is executive director of the Xerces Society for Invertebrate Conservation, a science-based conservation organization that "protects the natural world through the conservation of invertebrates and their habitats," according to its website.

"They (scientists) recommend promoting the growth of milkweed, maintaining dense forests and reducing the use of pesticides in the monarch range," the World Wildlife Fund said.

And the monarch butterflies have popular fascination on their side.

"We are encouraged by the thousands of individuals who have made it their mission to help monarchs by planting milkweed and nectar flowers and protecting these animals from pesticides," Black said.

Wendy Caldwell, who has been working with monarchs since about 2007, told CNN that she quickly learned the power of this beloved insect to captivate people and get them outdoors and engaged in conservation.

Caldwell is the executive director of Monarch Joint Venture, a nonprofit that coordinates a network of more than 110 organizations from all over the United States to conserve the migration of the monarchs, according to its website.

"I think that this IUCN listing will continue to help us grow that momentum just by generating awareness that monarchs are in trouble," she said. "They need our help, and everybody has a role to play."