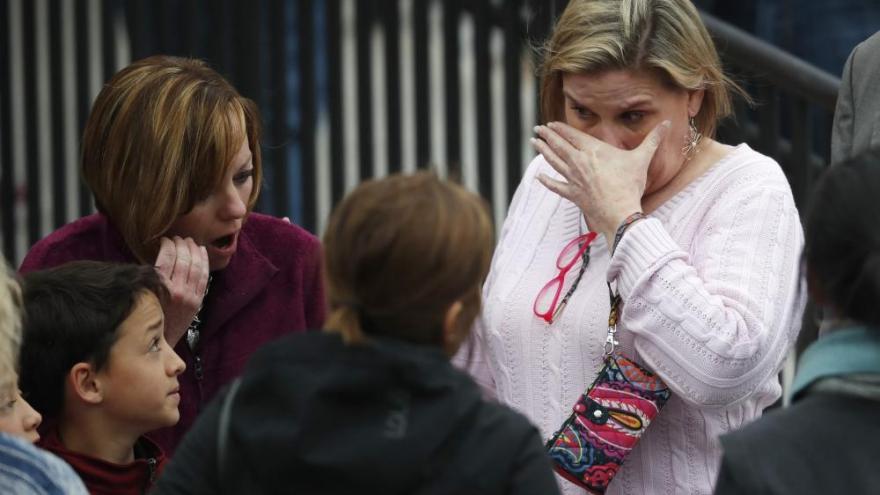 Parents fight back tears as they wait for their children at a recreation center in Highlands Ranch, Colorado.

(CNN) -- The two suspects accused of carrying out a mass shooting at a Denver-area charter school made their first appearances in court Wednesday.

Eighteen-year-old Kendrick Ray Castillo was killed and eight others were wounded in the shooting at STEM School Highlands Ranch. First-degree murder and attempted murder charges will certainly be filed, said 18th Judicial District District Attorney George Brauchler. He wants time to consider other charges, he said.

Erickson took the two handguns used in the shooting from his parents, according to a law enforcement source with direct knowledge of the investigation. Both guns were purchased legally, the source said.

Both suspects are scheduled to appear separately in court again on Friday afternoon.

Erickson spent most of his hearing Wednesday with his head bowed, his bushy head of hair -- colored with streaks of purple -- obscuring his face. He spoke only when spoken to directly by the judge, and at one point signed a court document while holding his handcuffed wrists in front of him.

Prosecutors have not decided whether they will seek to try the 16-year-old suspect as an adult, Brauchler told reporters.

Authorities initially referred to the 16-year-old suspect as female. But the suspect's lawyer said in court that McKinney goes by the first name Alec, and uses the pronoun "he," Colorado Judicial Department spokesman Rob McCallum said.

Brendan Bialy, a student who helped disarm one of the suspects, said he knows both alleged shooters. Erickson was a student in his class, where another student was killed and several were wounded, he said.

Hero student is a "legend"

Bialy wants people to remember Castillo as a "legend."

The two were sitting by a classroom door when someone from their class arrived late and took out a gun, he said. Castillo immediately rushed him.

"It was immediate, nonhesitation, immediate jump into action," Bialy said of Castillo's reaction. "The gunman was there and then he was against the wall and didn't know what the hell hit him."

Bialy and a third student joined in and wrestled with the shooter, who may have fired once or twice more during the struggle, Bialy said.

Once he got the gun away and the other student had the shooter pinned down, Bialy went over to Castillo, who was unresponsive. Castillo died at the school.

He was a kind, hilarious jokester who was always ready to help his classmates, student Tuscany "Nui" Giasolli said.

"Kendrick was such a nice kid. If you needed something, he would be there for you," Nui told CNN on Wednesday.

That proved true even in the young man's final moments.

Castillo and Nui were analyzing comedy in English class and watching "The Princess Bride" Tuesday afternoon.

Nui said the gunman talked to the teacher, then walked around the room.

"Next thing I know, he's pulling out a gun," Nui said.

She said the gunman told everyone not to move. "And that's when the shooting started."

Nui's mother, Nyki Giasolli, said if not for the heroism of her daughter's classmates, "I wouldn't have my baby today."

"All these kids are alive because of (Castillo's) sacrifice and the bravery of all the boys to neutralize the threat," Giasolli said.

But across town, Castillo's parents are mourning.

A father's mixed emotions after losing his only child

At his home in Denver, John Castillo struggles to stop sobbing.

He's torn between pride and anguish after the heroics of his only child.

"Selfless -- that's what my son was. And it got him killed. But he saved others," the father said.

"Because of what he did, others are alive, and I thank God for that. ... But there's another part of you that wishes he just turned and ran, retreated, hid."

Like many parents, John Castillo waited at a reunification center Tuesday for buses to drop off survivors. One by one, he watched parents and children embrace with relief.

But he takes solace in knowing other children are alive because of Kendrick.

"I'd like the world to know this wasn't your average kid. ... He was extraordinary."

How the Columbine shooting nearby changed everything

The grieving community had just marked the 20th anniversary of the Columbine High School shooting in nearby Littleton that left 12 students and a teacher dead.

But the Columbine shooting changed the way police respond to active shootings. In 1999, responding officers didn't enter the school and it took 47 minutes after the gunfire erupted for SWAT teams to enter.

On Tuesday, authorities were inside the STEM School Highlands Ranch within a few minutes after getting the first calls.

"I have to believe that the quick response of the officers that got inside that school helped save lives," Douglas County Sheriff Tony Spurlock said.

But the tragedy dealt another traumatic blow to a community that's endured a rash of mass shootings.

"If you had suggested ... that in 20 years, in 20 miles, we would have dealt with Columbine, Aurora theater, Arapahoe High School, the shooting of Zack Parrish and four other deputies, we'd have thought you mad," district attorney George Brauchler said Wednesday.

"Yet here we are again."

The school doesn't have a school resource officer, but it did have a private security guard, Spurlock said.

And that guard was among the first to confront one of the suspects, said Grant Whitus, chief operating officer of BOSS High Level Protection.

Whitus -- the first SWAT officer to enter Columbine 20 years ago -- declined to identify the guard but said he was "instrumental" in stopping the attack.

He said the guard drew his gun, took the suspect into custody and turned the suspect over to sheriff's deputies.

Had the guard not been on site, "countless lives would have been lost," Whitus said.

But the guard still feels bad that he couldn't stop the entire attack.

"You never think this would be the new reality"

Fernando Montoya's 17-year-old son was shot three times on Tuesday, but he survived and was released from the hospital.

"Thank God he is fine," Montoya told CNN affiliate KMGH. "Even though he got shot, he's OK. He's going to walk out on his feet."

But the teen is still grappling with the fact that such violence could happen at this school.

"It's hard to believe that someone in the classroom is going to have a weapon and is just going to open fire like nothing," Montoya told KMGH.

The mother of another student said she got a horrifying call from her daughter:

"'Mommy, there's a gun (being) shot at my school,'" the mother recalled to CNN affiliate KDVR.

"(With) everything at Columbine, you never think this would be the reality of this situation."

"Our STEM family is hurting"

"STEM" stands for science, technology, engineering and math. The STEM School Highlands Ranch is a "free, public charter school," according to its website.

"Our STEM family is hurting tonight," Douglas County School Superintendent Thomas S. Tucker said in a letter to families Tuesday. "Supporting one another in the coming days, weeks and months is critical."

The school will be closed the rest of the week.