Mom of internet star 'Success Kid' threatens to sue Rep. Steve King for using his meme in a fundraising ad without permission 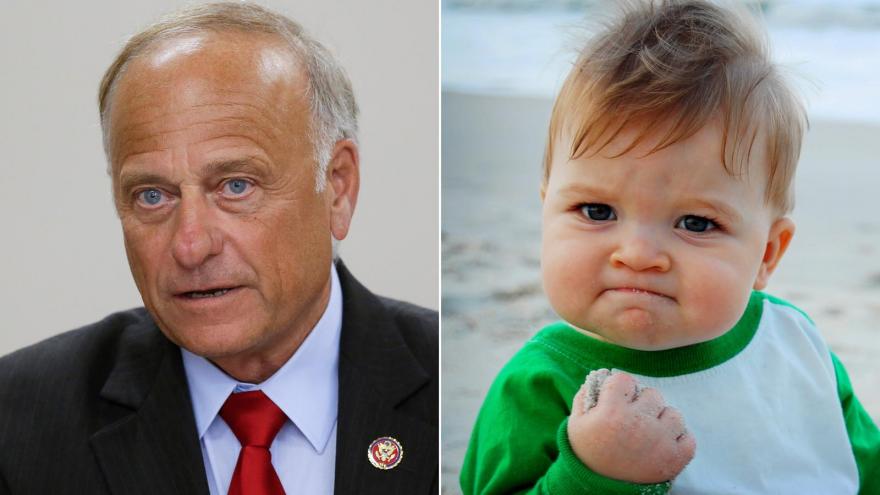 (CNN) -- The mother of the photogenic little boy known around the internet as "Success Kid" is threatening to sue a congressman who has a history of making racist and insensitive remarks for using her son's photo without permission.

An attorney for Laney Griner sent a cease and desist letter to Rep. Steve King on Monday demanding that the Iowa Republican stop using a meme featuring her son Sam in a fundraising ad on Facebook.

It alleges that using the photo for fundraising without consent violates the Griners' copyright and infringes on Sam's privacy, image and personality rights.

"From its grassroots beginnings, 'Success Kid' became a viral sensation beloved by millions of Americans, largely due to its good-natured, friendly message. Your use has harmed and continues to harm that well-earned goodwill," the letter says.

The letter also demands that King post an apology on his Facebook page that explains that the Griner family did not authorize the use of the image, refund any money raised by the ad and notify donors in writing that the ad was not approved. It called on King to contact his client to discuss reasonable compensation for using the meme.

King had not responded to the letter, Griner's attorney Stephen D. Rothschild told CNN on Tuesday afternoon, but the ad has been taken down. King's office has not responded to CNN's request for comment.

"It really made me angry seeing my son mixed in with that, because his [King's] posts are just so angry and just intended to incite," Griner told CNN.

It features baby Sam with the fistful of sand and triumphant expression that's been shared all over social media for more than a decade, but the photo has been edited to look like he's standing in front of the US Capitol building.

The words "FUND OUR MEMES!!!" are written on the photo in bold letters and encourages people to go to a fundraising page to "make sure the memes keep flowing and the Lefties stay triggered."

King has received bipartisan condemnation for racist remarks and was removed from all of his committee assignments in January 2019, after an interview where he appeared to lament that the term "white supremacist" is considered offensive.

Griner said she was pretty upset when she saw the ad and tweeted, "Just so it's clear -- I have/would never give permission for use of my son's photo to promote any agenda of this vile man or that disgusting party."

She describes herself as very liberal and said King is against everything she believes in. "But it's not even just about that. It's more just about being negative," she said. "The thought of anyone thinking we gave permission or, you know, associating us with him is really kind of sickening."

Griner took the photo of her son on the beach in Jacksonville, Florida, in 2007, when Sam was 11 months old. She says she snapped the photo right before he tried to jam the handful of sand into his mouth.

She posted the photo online and she and her husband were surprised to watch his viral fame.

"He has no memory of it, the picture being taken, of course, and as far as he knows, he's been a meme forever," Griner said.

Sam's 13 now, and his mom said he's gotten a little embarrassed by the attention the meme gets.

She said he watches the news and shares her opinion about King.

"So I told him about this. He was happy that we were doing something about it," Griner said.

Griner said they don't get as many requests to use the photo as they did when the meme was at its peak and that it's not a big moneymaker for the family.

The meme is so popular that fans donated more than $100,000 in 2015 to help Sam's dad, Justin, get a kidney transplant. Griner said her husband is doing great now.

She said she's flattered that so many people have been inspired to use the meme, even if they're spreading messages that she disagrees with, but says that advertisements are different.

The family has allowed Coca Cola, Microsoft, Verizon, Marriott and a few cereal companies use the photo for campaigns and gave the White House permission to use it on Twitter during the Obama administration to celebrate an immigration measure, Griner said.

"We're picky about who uses it and how," she said.