Model projects nearly 300,000 Americans could die from Covid-19 by December 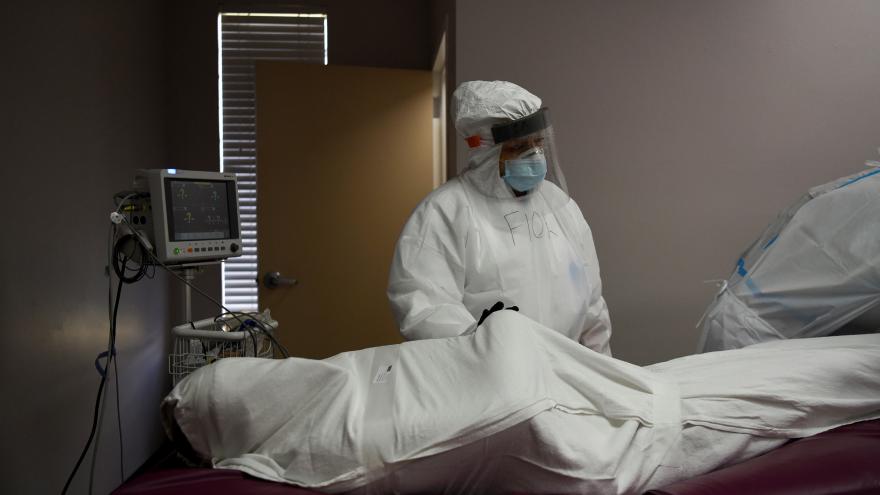 (CNN) -- Researchers behind an influential model are projecting that the US death toll from coronavirus could reach nearly 300,000 by December 1 -- but that can be changed if Americans consistently wear masks.

According to Johns Hopkins University, 159,433 people have died in the United States since the pandemic began.

"The US forecast totals 295,011 deaths by December," the Institute for Health Metrics and Evaluation statement says.

The model doesn't have to come true, said IHME Director Dr. Christopher Murray: "The public's behavior had a direct correlation to the transmission of the virus and, in turn, the numbers of deaths."

The model comes the same day the US Centers for Disease Control and Prevention released an ensemble forecast that projects 181,031 deaths by August 29.

"State-level ensemble forecasts predict that the number of reported new deaths per week may increase over the next four weeks in Hawaii and Puerto Rico and may decrease in Florida, Mississippi, New Mexico, the Northern Mariana Islands, Ohio, Texas, Vermont, and the Virgin Islands." the CDC says on its forecasting website.

The forecast relies on 24 individual forecasts from outside institutions and researchers.

Fauci: We can get case levels down by Election Day

The US has what it takes to get Covid-19 case levels down to more manageable levels by Election Day if it uses masks and other "fundamental tenetsof infection control" -- but it needs to get serious now, Dr. Anthony Fauci told CNN on Thursday.

"We can be way down in November ... if we do things correctly , and if we start right now," Fauci, the director of the National Institute of Allergy and Infectious Diseases, told "New Day."

Fauci's roadmap is the same one he's been preaching, including using masks in public, social distancing and washing hands.

And he points to hopeful signs that this works. Arizona, which had a significant outbreak this summer, has "started to really clamp down and do things right," he said.

Arizona went from averaging nearly 4,000 cases a day in early July to below 2,000 new cases a day now, according to data from Johns Hopkins University.

"I really do believe, based on the data we see in other countries, and in the United States, in states and cities and counties that have done it correctly, that if we pay attention to the fundamental tenets of infection control and diminution of transmission, we can be way down in November," Fauci said.

"Everybody on the team of American citizens needs to pull together. ... It's up to us," he said.

With 4.8 million cases in the US alone, Fauci elaborated on a warning that a fellow member of the White House coronavirus task force sounded.

On Wednesday, task force coordinator Dr. Deborah Birx warned state and local officials in a phone call about a uptick in a test-positivity rate in several cities, including Chicago, Boston, Detroit and Washington, DC.

Test positivity rates can give early indication that a surge in daily case counts will come if nothing is done, Fauci said Thursday.

"So what Dr. Birx is saying, is now is the time to accelerate the fundamental preventative measures that we all talk about: Masks, social distancing, avoiding crowds, outdoors greater than indoors, washing hands, et cetera," Fauci said.

"Those kinds of simple things can actually prevent that uptick from becoming a surge. So she was warning the states and the cities to be careful, because this is a predictor of trouble ahead."

At least 39 states as well as Washington, DC, and Puerto Rico have put some type of order in place that mandates the use of masks, and the development of vaccines is advancing with the hope that they could reach the public in 2021, Fauci has said. Still, the nation still is missing the cohesive response to the virus he would like to see.

Fauci indicated the US didn't lower daily case rates enough in the spring -- but he also thinks that the country can get them down "to a level of hundreds of cases, and maybe a thousand or two" with the preventive measures he's prescribing.

States and cities taking matters into their own hands

Without a strong national game plan in place, state leaders are taking control of coronavirus measures.

Testing, contact tracing, masks and distancing have all been stressed by health experts as measures that could help reduce the spread of the virus and bring numbers down to the baseline necessary to reopen safely.

To ramp up production of tests that can give results in 15 to 20 minutes, governors from Maryland, Louisiana, Massachusetts, Michigan, Ohio and Virginia reached an agreement to run a total of 3 million rapid antigen tests, according to a statement released Tuesday.

Meanwhile, when people do test positive in Virginia, a new app announced by Gov. Ralph Northam on Wednesday will alert those with whom they have been in close contact of their potential exposure. COVIDWISE uses Bluetooth Low Energy technology, not personal information or location data, to detect when people have been in close enough range, according to a release.

"This ... is not focused on small and ordinary gatherings in people's homes. These are focused on the people determined to break the rules, posing significant public dangers and a threat to all of us," Garcetti said Wednesday.

Since the beginning of June, the county's coronavirus case rate for people ages 30-49 nearly tripled, and the rate for ages 18-29 nearly quadrupled, Ferrer said.

"This is also the age group that is most likely to be attending the large parties that we keep seeing," Ferrer said.

North Carolina is extending Safer at Home Phase 2 for five weeks to combat the spread of the virus as schools reopen, Gov. Roy Cooper said. That phase includes restrictions on businesses; a mask mandate in public places; and limiting indoor and outdoor gatherings to 10 and 25 people, respectively.

And Mississippi, which ranks fifth among states for highest cases per capita, has gone from mandating masks in only the counties with the worst numbers to requiring them at public gatherings and retail businesses statewide.

School districts have been at the center of a difficult debate about whether to reopen schools for in-person classes as infections continue to spread.

As of Thursday, 62 of the country's largest 100 school districts have said they will start the school year with full online learning, accounting for nearly 7 million students.

Early in the outbreak, health experts believed severe infections and spread were less likely among children. But more recent data shows that while children are far less likely to die from Covid-19 than adults, they can still pass the disease on to others.

But keeping students home could lead to millions of parents being forced to quit their jobs, according to economists from Goldman Sachs.

Single parents, those whose jobs do not allow them to work from home and those without access to child care are at risk of having to choose between sending their children to school -- whether or not they think it's safe -- or quitting their job to stay home with them, said Dr. Edith Bracho-Sanchez, a primary care pediatrician and assistant professor of pediatrics at Columbia University Irving Medical Center.

"We have failed the parents and the kids of this country," she said.

Correction: An earlier version of this story incorrectly stated Mississippi's rank among states for coronavirus cases. It is the fifth-highest per capita.