Model predicts Covid-19 pandemic will 'peter out' by May, but experts are skeptical 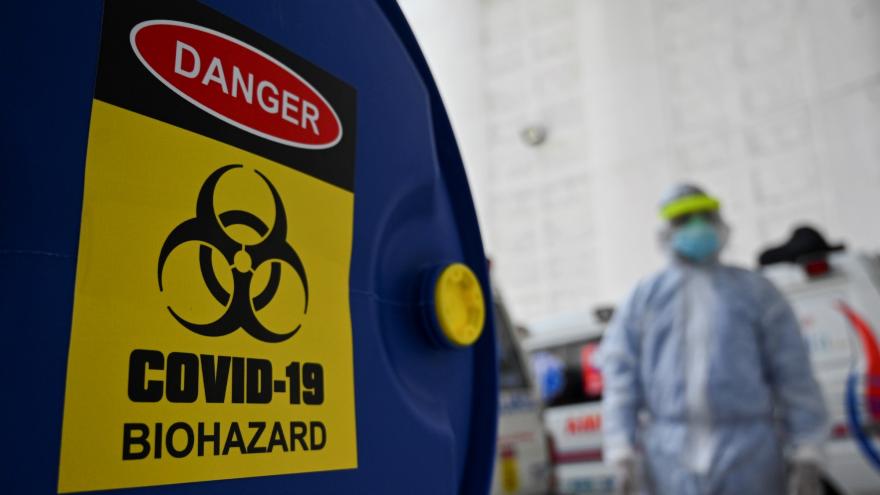 (CNN) -- An influential coronavirus model cited by the White House predicts the pandemic will "peter out" in May, but experts are wary about its assumption that there will be no resurgence of the virus in the summer months.

The model, from the Institute for Health Metrics and Evaluation at the University of Washington, also said Monday was the peak day for daily deaths in the United States. It projected about 2,150 Covid-19 deaths Monday, which are expected to decline moving forward.

New York, one of the hotspots for the virus, hit its peak number of deaths three days ago, according to the model, but hundreds of deaths are still expected daily for the coming week.

By August, the model predicts, a total of 68,841 people will have died in the United States, which is up from Friday's projection of 61,500 deaths.

The University of Washington model release coincides with the White House's desire to "reopen" the country soon now that the number of new cases has declined over two consecutive days, but experts warn that in the United States' coronavirus fight, different states will see different peaks.

States on both coasts are now banding together to fight the pandemic. On the East Coast, the Northeastern states of New York, New Jersey, Connecticut, Pennsylvania, Delaware, Rhode Island and Massachusetts are coordinating to reopen the economy. Out West, the governors of California, Oregon and Washington agreed on a regional pact.

More than 23,000 people have died from Covid-19 since the virus arrived on American shores, according to Johns Hopkins University's numbers, but the daily tally of deaths dropped Saturday and Sunday, which could be a sign for optimism.

The number of infections -- which stood at more than 570,000 on Monday afternoon -- was also down Saturday and Sunday.

This comes as US Surgeon General Dr. Jerome Adams says cases in some of the country's hotspots -- New York, New Jersey, Detroit and New Orleans -- appear to be "leveling off" or even declining. The situations in California and Washington, meanwhile, remain stable.

"In the midst of tragedy, there IS hope," Adams tweeted Monday. "Social distancing and mitigation IS working. There is a light at the end of this dark tunnel, so keep at it."

Still, many states are in the throes of an intense effort to stem the illness' spread. New York crossed the 10,000-death threshold Monday, as its cases topped 190,000, Gov. Andrew Cuomo said. New Jersey and Michigan also have frightening death tolls, with more than 2,300 and 1,400 respectively.

The upside to New York's numbers is that the three-day average for hospitalization, new hospitalizations, intensive care admissions and intubations are all down, Cuomo said Monday morning.

States band together to fight Covid-19

Cuomo announced Monday the beginning of a "geographically coordinated" reopening plan in conjunction with leaders in New Jersey, Connecticut, Pennsylvania, Delaware, Rhode Island and Massachusetts. Each state will name health and economic officials to join the governors' chiefs of staffs to a working group, which will begin discussions Tuesday.

The group will come up with "parameters to go forward," Cuomo said, and while they may not agree on every aspect of the strategy, finding areas where they can coordinate will be important, especially given the states' close economic, health and transportation ties.

Calling the commuter thoroughfare from his state of Connecticut to New York the "Covid corridor," Gov. Ned Lamont said it was vital that "you don't pull the trigger too early," but applauded the partnership.

"The reality is this virus doesn't care about state borders, and our response shouldn't either," Rhode Island Gov. Gina Raimondo said.

"By working, sharing our information and intelligence, I think will help each of us make better decisions," Delaware Gov. John Carney added, while Pennsylvania Gov. Tom Wolf said, "We can do anything better when we work together in this region."

On the West Coast, California, Oregon and Washington are joining forces "on a shared approach for reopening our economies," a joint statement from California Gov. Gavin Newsom, Oregon Gov. Kate Brown and Washington Gov. Jay Inslee.

The public health leaders in the three statements will focus on four main goals, the statement read. These goals include: Protecting vulnerable populations at risk like those in nursing homes, ensuring care for those who may contract Covid-19, mitigating the non-direct health impacts of the virus on disadvantaged communities and protecting the public by ensuring the lifting of restrictions comes with adequate testing.

"The West Coast is guided by science. We issued stay at home orders early to keep the public healthy. We'll open our economies with that same guiding principle," Gov. Newsom tweeted Monday.

Inslee also tweeted that "any successful lifting of interventions must include a robust system for testing, tracking and isolating."

"The states will work together to share best practices and coordinate a framework to get it done," Inslee tweeted.

On the federal level, planning is underway for a federally supported "public health force" to carry out the state-level epidemiology "that's going to be necessary to open the country back up," a federal health official with knowledge of the planning told CNN.

The official, who is directly involved in the day-to-day national coronavirus response, told CNN the plan was part of discussions of next steps by the White House Task Force.

The federal health official told CNN that the "large-scale" push for epidemiology is part of the recent initiative led by eight "community protection" CDC field teams deployed in recent weeks. Those CDC teams were sent to states where transmission rates are low to assist state and local health departments with contact tracing and testing.

Neither the Task Force nor the US Centers for Disease Control and Prevention responded to CNN's request for comment.

The United States is also expected to receive about 750,000 more coronavirus tests from South Korea, according to the Federal Emergency Management Agency.

FEMA awarded contracts to manufacturers in South Korea last week to provide the tests, according to a FEMA spokesperson and federal records.

Trump is scheduled Tuesday to announce the formation of the "Opening our Country Council," which is expected to focus on ways to stimulate the economy. Another panel, the White House's coronavirus task force, has been focusing on providing advice to the states on what to do once reopening is advised.

The task force is weighing potential benchmarks that would precede reopening the states, but have yet to settle on specific targets, people familiar with the discussions said.

All 50 states are under a federal disaster declaration for the first time in US history. There are more than 29,000 members of the National Guard deployed across the country to deal with the pandemic, according to the National Guard Bureau. Guardsmen have been called to serve a variety of roles, from staffing emergency operations centers to restocking grocery shelves.

Key to how optimistic Americans should be will depend on what comes next. The country's testing trajectory will be hugely important, experts say.

"It's important to look at the country as many different separate situations," said Dr. Robert Redfield, director of US Centers for Disease Control and Prevention, on NBC's "Today" show.

"This pandemic has affected different parts of the country differently," Redfield said. "We're looking at the data very carefully, county by county by county, and we will be assessing that."

Public health capabilities need to be improved to perform early case detection, isolation and contact tracing, he said, and officials need to "start working to rebuild confidence in the community, so the community has confidence to reopen."

The US is "nearing the peak right now," Redfield told the morning show.

"You'll know when you're at the peak when the next day is less than the day before," he said. "We are stabilizing across the country in terms of the state of this outbreak."

As for getting the country back to normal, Redfield said it has to be done correctly and "it's going to be a step-by-step, gradual process."

The call for caution is being echoed on the world stage as World Health Organization Director-General Tedros Adhanom Ghebreyesus asked people to remember the virus accelerates faster than it decelerates, so "control measures can only be lifted if the right public health measures are in place."

Redfield concurred with Adams that social distancing is working -- and said the potential death toll "while sadly too high, was far less than we anticipated" -- but said relaxing those guidelines would need to be done carefully.

Testing is still not widely available, and many states have still tested only small percentages of their populations.

The White House has worked to develop a more robust testing strategy, including shipping new rapid tests developed to states, and has worked to scale up serology testing, used to detect antibodies that would identify people who are likely immune to coronavirus and who could return to work or other aspects of normal life.

Antibody tests, which reveal past coronavirus infection -- an especially important test for health care workers -- will "give us a good idea from a surveillance point of view of how significant the outbreak was."

As millions of Americans worried about stay-at-home orders and social distancing Sunday, about 95 million people in nearly 20 states experienced severe weather and tens of millions more will see storms Monday.

A majority of the storms were across the South and East Coast, according to the National Weather Service, with at least 34 tornadoes reported in Texas, Louisiana, Mississippi and Georgia as of early Monday. At least 18 people died.

Emergency officials said Sunday people sheltering from tornadoes and protecting themselves from severe weather take priority over the social distancing guidelines Americans are adhering to during the coronavirus pandemic.

Forecast models show the worst of the weather sweeping up the eastern portions of Georgia, the Carolinas and Virginia, but even as far north as New York, officials were urging caution.

"We have strong winds and heavy rain coming our way on Monday, New York City, so it's really simple: if you do not need to be outside tomorrow then STAY HOME," de Blasio tweeted.