Mnuchin: 'I am not violating the law' by refusing to hand over Trump's tax returns 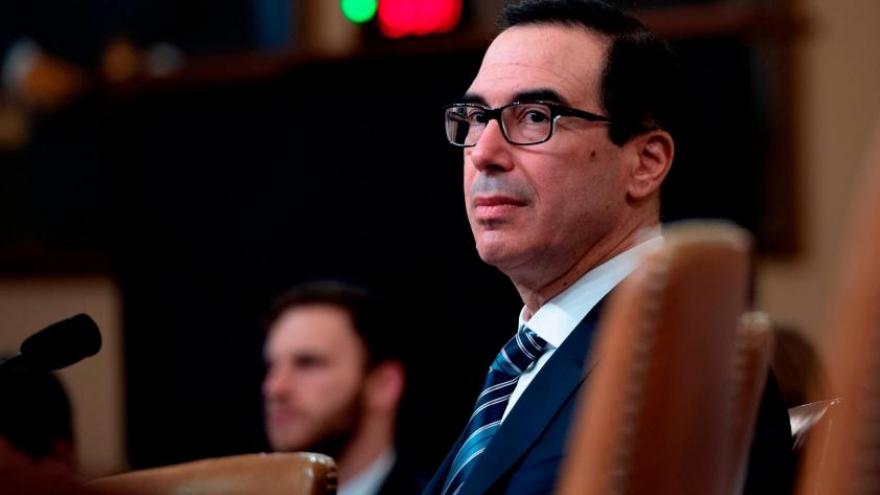 Treasury Secretary Steven Mnuchin is set to make his first appearance on Capitol Hill after refusing to comply with a congressional subpoena for President Donald Trump's personal tax returns.

(CNN) -- Treasury Secretary Steven Mnuchin on Wednesday rebuffed claims by House Democrats that his refusal to comply with a congressional request for President Donald Trump's personal tax returns is a violation of the law.

"Absolutely not," said Mnuchin during a House Financial Services Committee hearing. "I have been advised I am not violating the law. I would have never done anything to violate the law. Quite the contrary, I was advised had I turned them over I would be violating the law."

Trump's top finance chief was repeatedly pressed by House Democrats over his decision last week to refuse to turn over Trump's tax returns under an obscure law that specifies the Treasury secretary "shall furnish" the information requested by the heads of the tax-writing committees.

Mnuchin -- one of the President's earliest allies -- on Friday restated in a one-page letter that an April 6 request by House Ways and Means Committee Chairman Richard Neal "lacks a legitimate legislative purpose" and that he is "not authorized to disclose the requested returns and return information."

The Washington Post reported on Tuesday that a confidential IRS draft memo last fall determined that the tax returns must be surrendered to Congress unless the President opts to invoke executive privilege.

Mnuchin said at Wednesday's hearing that he had not discussed the memo prior to the Post's story.

"I became aware of that when we got an inquiry from The Washington Post," said Mnuchin. "We are trying to find out who wrote the memo, where it came from, when it was, and why it wasn't distributed."

He brushed off criticism by Democrats that the draft IRS memo contradicted the legal basis for denying Trump's tax returns, instead telling lawmakers that the memo was addressing a different set of issues than the argument laid out to Neal after consulting with the Justice Department.

"The memo is addressing a different issue, and is not addressing the issue that we and the Department of Justice looked at. The legal advice we have relied upon -- and I understand there are three branches of government, and when it comes to constitutional issues, there could be different interpretations," Mnuchin said in response to questions from Virginia Democratic Rep. Jennifer Wexton.

Mnuchin also repeatedly denied any political interference in his decision-making around the tax return issue, stating that he didn't discuss the matter with anyone inside or outside of the White House, including the President himself.

"I had no conversations ever with the President or anyone in the White House about delivering the President's tax returns to Congress," Mnuchin stated a few times when asked during the hearing.

Neal has fought for six weeks to obtain Trump's returns in order to determine whether the IRS is following its policy of annually auditing the president. Mnuchin told a Senate panel last week that Treasury officials would be willing to help members of the Ways and Means Committee examine the process without seeing the President's returns -- an offer the secretary said the committee hasn't accepted yet.

Mnuchin's last appearance in April before the House Financial Services Committee ended in a testy exchange with the chairwoman of the panel, California Democratic Rep. Maxine Waters, in which he offered her unprompted advice on how to conduct a hearing as he mimicked pounding a gavel.

Trump is the only president in modern history who's refused to voluntarily release his tax returns, and also to maintain his interest in his personal business while in office, prompting questions and lawsuits about potential conflicts. Several Democratic 2020 candidates have already released their tax information, seeking to draw a contrast with Trump.

House Democrats have grown increasingly furious over repeated attempts by the Trump administration, including the Treasury Department, to block various congressional oversight efforts including over the President's tax returns, calling such efforts to undermine the probes "unprecedented stonewalling."

Trump has said the White House will be "fighting all the subpoenas" issued by congressional committees conducting oversight investigations on his administration. The White House has also instructed certain officials and staffers not to testify before Congress, including former White House counsel Don McGahn, who failed to appear Tuesday.

The administration's rejection of the tax return subpoena is likely to set up a court battle between the legislative and executive branches that could go beyond the 2020 election.

Neal has said he prefers to move to court without holding Mnuchin in contempt -- unlike House Judiciary Committee Chairman Jerry Nadler, who spearheaded a recent vote to hold Attorney General William Barr in contempt.

"I don't see what good it would do at this particular time," Neal told CNN on Friday when asked if he would hold the Treasury department or IRS Commissioner Charles Rettig in contempt. "I think if both sides have made up their minds, better to move it to the next branch of government, the judiciary."

In the past, congressional chairs have taken the step to hold an official in contempt before going to a judge.

During Wednesday's hearing, Waters, at the request of Democratic Rep. Stephen Lynch of Massachusetts, said she would consult with the House general counsel on whether Mnuchin should be held in contempt for refusing to furnish Trump's tax returns.

"We are unable to address this at this time," said Waters. "We will take your question to general counsel and put it in writing and seek an answer from him or her to find out what the next should be. We will move on that as quickly as possible."

It's unclear whether Waters could hold Mnuchin in contempt, given that her committee didn't issue the subpoena. Neal has already indicated he does not plan to take that step.