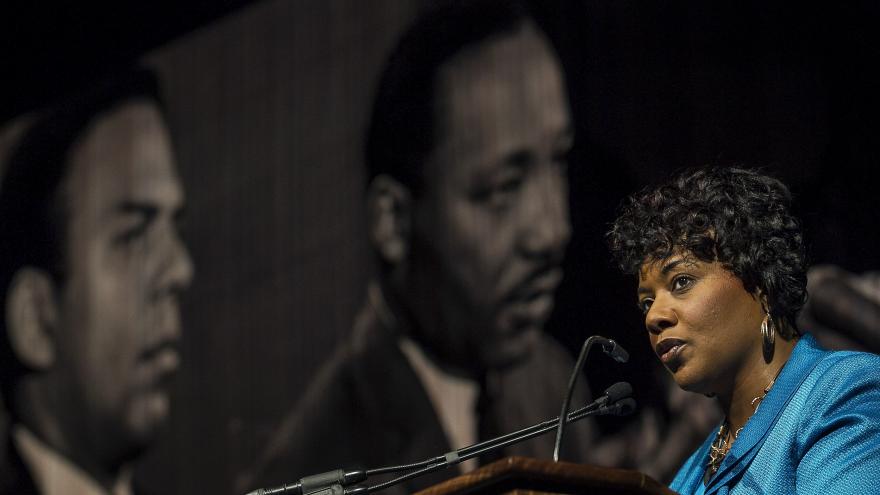 The Rev. Martin Luther KIng Jr. waves to supporters during the 1963 March on Washington.

(CNN) -- Each year, Martin Luther King Jr. Day encourages Americans to come together and volunteer to improve their communities.

For some, this year's celebration is clouded by conflict, increasing racial division and deteriorating social circumstances. But the late civil rights leader's daughter Bernice King believes there is no better time to build community.

'The fierce urgency of now'

In "Where Do We Go From Here: Chaos or Community?" the last book written by King's father to be published in his lifetime, he wrote: "We are now faced with the fact that tomorrow is today. We are confronted with the fierce urgency of now. In this unfolding conundrum of life and history, there is such a thing as being too late."

"In this critical hour and contentious climate, not only in the United States but in the world, I believe that we need to pay attention to these words from my father," said King. "We cannot spiritually, relationally or globally afford to ignore the injustice and inhumanity and must work fervently to build the beloved community," she said.

As CEO of the King Center in Atlanta, King preserves her father's legacy and promotes his philosophies of non-violence, justice and community. People are divided today because they are disconnected, something she believes her father would try to change, she said.

"Humanity engaging each other as a human family in our World House greatly depends on us understanding our interrelatedness and interconnectedness."

"As Daddy said, 'We are caught in an inescapable network of mutuality, tied in a single garment of destiny.' Our very survival hinges on us, recognizing this."

King believes that this recognition should lead to bolder actions like courageous conversations addressing the pain of racism and injustice.

"Truth is essential," she said.

"We really struggle with facing the truth of this nation's history and of the devastating, dehumanizing impact of slavery, Jim Crow, and the racism that persists today. So, we need to have some courageous conversations and some repentance as a nation."

"We have to understand the connection between peace, love, and justice. Once we understand this connection, we can begin to more strategically build the consciousness and the coalitions to change unjust systems and to correct hate."

Asked if she felt her father's dream has been deferred, King noted the victories but said there's work to be done to sustain the gains.

"When we are not diligent and attentive, people with injustice in mind will, with great diligence and attention, destroy what's been built and try to reverse progress."

To King, now is not a time for apathy or complacency. It is time for positive action. "We have to understand my father's teachings and his work in a comprehensive way," she said.

"That will help us embrace the love ethic, but also be able to actualize love by treating each other with dignity and respect and in pursuit of true peace, which includes justice."