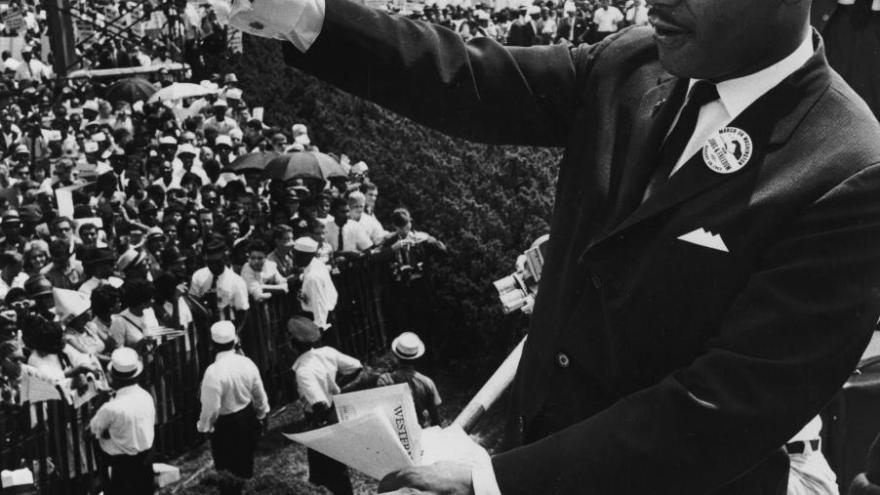 (CNN) -- Martin Luther King Jr. Day is celebrated on the third Monday in January, although Dr. King was actually born on the 15th of January 1929, 92 years ago.

Mrs. Coretta Scott King and musician Stevie Wonder fought for years to make it a federal holiday. Wonder told CNN that they started with tours and marches in the early 1980s. "And so our first march was in 1981, and we had another one in '82, '83. And then ultimately the bill was signed by President Reagan."

Below are some facts and numbers related to the federal holiday, in which Americans are encouraged to participate in a day of service. The numbers tell the story.

From the King sermon delivered on the night of April 3, 1968, at the Bishop Charles Mason Temple in Memphis, Tennessee. Titled "I've Been to the Mountaintop," it was his last speech.
Source: Martin Luther King, Jr. Research and Education Institute at Stanford University

December 1, 1955 - The Montgomery Bus Boycott
The Montgomery Bus Boycott against segregated seating lasted approximately one year, starting December 1, 1955. This is what Dr. King said in his book, "Stride Toward Freedom: The Montgomery Story": We have no alternative but to protest. For many years we have shown an amazing patience. We have sometimes given our white brothers the feeling that we liked the way we were being treated. But we come here tonight to be saved from that patience that makes us patient with anything less than freedom and justice.
Source: Stride Toward Freedom: The Montgomery Story by by Dr. Martin Luther King, Jr.

February 4, 1968 - Dr. King encourages his congregation to seek greatness through service and love
"Everybody can be great because everybody can serve," Dr. King said in his sermon "The Drum Major Instinct." Mrs. King read the same statement when, in 1994, she asked congress to make the holiday an official national day of humanitarian service.
Source: Martin Luther King, Jr. Research and Education Institute at Stanford University

1980 - Wonder calls for a day of remembrance
Wonder's release of "Happy Birthday," a song asking for a day "in full remembrance."
Source: Billboard; Universal Music Group

Walk in King's footsteps at these destinations.