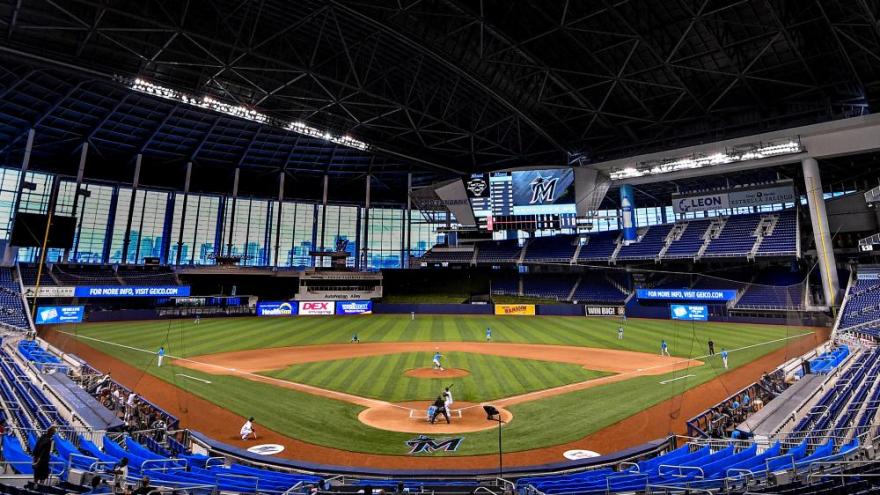 A view of the field during an intrasquad game at Marlins Park at Marlins Park on July 17, 2020. The team has cancelled its home opener against the Baltimore Orioles after multiple players and staff contracted coronavirus.

(CNN) -- A number of players and coaches on the Miami Marlins tested positive for Covid-19, pushing Major League Baseball to postpone three games and raising questions about its plans to hold a season amid a pandemic.

The Marlins' home opener against the Baltimore Orioles and the New York Yankees game at the Philadelphia Phillies, both scheduled for Monday night, have been postponed, MLB said.

Commissioner Rob Manfred didn't discuss canceling the season with the league's 30 team owners during a previously scheduled conference call, a source with knowledge of the call told CNN.

In an interview on MLB Network, Manfred said the Marlins will not play their game on Tuesday in Miami, either.

"We're doing some additional testing," Manfred said. "If the testing results are acceptable, the Marlins will resume play in Baltimore on Wednesday against the Orioles."

Eleven Marlins players and two coaches tested positive for the virus, ESPN reports. Marlins CEO Derek Jeter said the team is staying in Philadelphia, where it just played a three-game series, pending the results of a new round of testing.

"Postponing tonight's home opener was the correct decision to ensure we take a collective pause and try to properly grasp the totality of this situation," Jeter said in a statement.

The positive tests come just days after MLB began its abbreviated 60-game season -- which had been delayed from its usual April opening because of the pandemic -- and already threaten to upend the young season.

Dr. Anthony Fauci, the nation's leading infectious disease expert, told CNN he wants to remain optimistic about the season. Fauci said teams have put a lot of effort put into starting the season in a safe way, mainly by televising games without spectators.

"This is one of the things that could really put a halt in the progression of where you're going through the season," Fauci said. "Hopefully, they'll be able to continue and hopefully this is an outlier ... (and) a number of players and personnel are not infected ... So, we'll just have to see how this plays out."

To try to limit outbreaks, MLB is holding games without fans and has banned high-fives, fist bumps and spitting among players.

Still, the outbreak among players and staff underscores the difficulty -- if not impossibility -- of bringing large groups of people into close proximity for long periods of time when the coronavirus is so widespread in the American community.

The Braves on Friday had to recall two catchers from their alternate training site after putting two players who had coronavirus-like symptoms on the injured list.

If the Marlins are to play any games soon, they might have to use some players from their alternate training site in Jupiter, Florida, where 30 other players have been practicing, or sign free agents.

It is unclear whether the postponed games will be made up as part of a doubleheader, on an off day, or whether the season will be extended.

Another possibility MLB might have to consider is whether to go forward with 29 teams. Major League Soccer is holding a tournament as it resumes its season and two teams -- Dallas and Nashville -- did not play because of outbreaks on their teams.

Nationals manager worries for his heath

Martinez, who underwent a heart procedure in 2019, told reporters: "I'm going to be honest with you, I'm scared. I really am."

He said he only has been at home or the Nationals' stadium. He said he washes his hands obsessively and wears a mask everywhere.

"But there's always that concern. You don't know. Right now, you don't know, because of my heart condition, what happens to me, if I do get it."

Martinez added, "My level of concern went from about an 8 to a 12."

The Nationals are scheduled to play three games against the Marlins in Miami, starting Friday.

Difficult in reopening amid a pandemic

In recent weeks, Miami has been one of the epicenters of the coronavirus, pushing hospitals to capacity. Miami-Dade County recently surpassed 100,000 confirmed coronavirus cases.

Sports have resumed in other parts of the world where coronavirus has been more successfully contained, including Europe and Asia. But the United States is by far the world leader in coronavirus cases and has not yet restarted any team sports without seeing new cases.

Los Angeles Dodgers pitcher David Price said on Twitter that he decided not to play this season partly because players' health wasn't being prioritized.

The outbreak, just three days into the season, stands as a clear warning for other sports leagues as well.

Like baseball, the NFL plans to begin its season in September at teams' regular home stadiums. Commissioner Roger Goodell on Monday formally announced the cancellation of preseason games.

But other sports leagues are reopening with their teams in so-called "bubbles" to try to limit interactions with the outside world.

The WNBA tipped off its season on Saturday at IMG Academy in Florida, the NBA is set to restart its season later this week in a bubble at ESPN Wide World of Sports Complex in Orlando and the NHL is planning to restart with dual bubbles in Toronto and Edmonton.