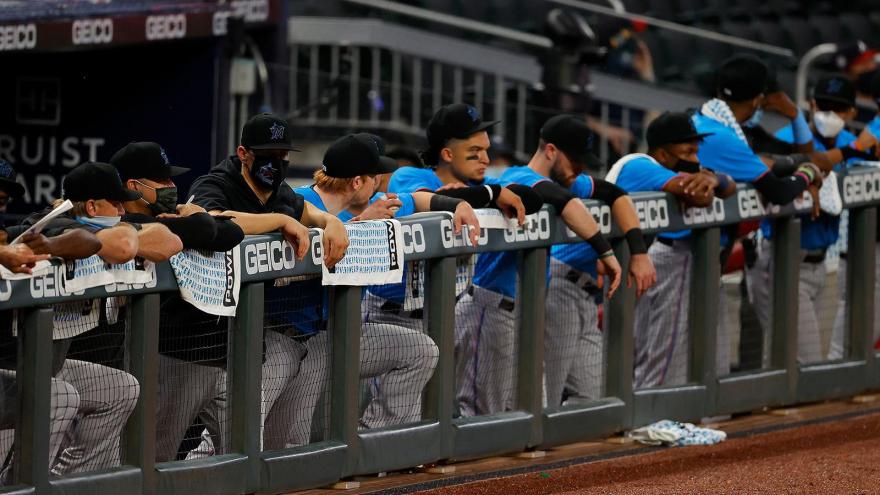 At least 21 members of the Miami Marlins organization have tested positive for Covid-19.

MLB Commissioner Rob Manfred has even warned that the shortened season could be shut down if the league and players don't improve their management of the virus, ESPN reported.

And several teams have already had to hit the pause button on previously scheduled games -- including the "Field of Dreams" game in Dyersville, Iowa, which has been postponed until 2021.

The recent cases and some players choosing to opt out of the season entirely are just the latest examples of how Covid-19 continues to wreak havoc in the world of professional sports.

The issue teams are facing is not necessarily that transmission is happening on the field but rather as the baseball players travel together, CNN Sports contributor Bob Costas said.

"Teams that have opposed the Marlins and the Cardinals have not had positives among their players because of that exposure," Costas said. "It seems that it's in groups. Teams that travel together, they're on the road together or may be breaking protocols to go out socially together. That's where the greatest risk of transmission seems to be."

"Baseball had their fingers crossed that if everybody followed the protocols, the nature of the sport didn't involve as a much close contact, that they might be able to get through the shortened season," Costas said.

After 13 new cases were reported in the St. Louis Cardinals' organization Monday, Marlins CEO Derek Jeter spoke about his own team's outbreak and said he hopes it could serve as a wakeup call for the league.

"We've been given an opportunity to hit the reset button, and moving forward we just cannot make any mistakes," Jeter said.

He attributed the cases among his team and staff to a "false sense of security," and said he hoped the outbreak would serve as a wake up call.

"We have seen firsthand just how contagious this virus is. After we left spring training, we had numerous discussions," Jeter said. "Some of our traveling party had a false sense of security and comfort in how they handled themselves when we left Miami."

But Jeter also defended his team against rumors that players had been acting irresponsibly while in Atlanta.

"What it boiled down to on this particular trip, was guys were around each other, they got relaxed, and they let their guard down. They were getting together in groups, they weren't wearing masks as much as they should have, they weren't social distancing," he said.

On Monday, the MLB announced that 13 members of the St. Louis Cardinals organization -- seven players and six staff members -- had tested positive for the virus.

John Mozeliak, the St. Louis Cardinals' president of baseball operations, batted down rumors that players had gone to a casino before testing positive. "I have no factual reason to believe that is true, and I have not seen any proof of that," Mozeliak said. "If someone was at a casino, though, that would be disappointing."

The team is staying in Milwaukee and will continue to be tested daily. They have postponed their planned games for the rest of the week and MLB is tentatively planning for the Cardinals to resume their season August 7 against the Chicago Cubs.

Philadelphia Phillies return to the field

Positive cases have also been identified in two staff members of the Philadelphia Phillies after they played three games against the Marlins.

All activities at Citizens Bank Park in Philadelphia are canceled until further notice and the team took a week off after the Marlins outbreak was announced.

The Phillies returned to the field in New York to face the Yankees Monday after their games against the Toronto Blue Jays were postponed.

Phillies Manager Joe Girardi, said he has been in contact with his players while they're on the road playing the Yankees and encouraging them to continue to take precautions against the virus.

"We told guys to stay in the hotel as much as you possibly can," Girardi said, adding that the team will be providing food and treatment for players at the hotel.