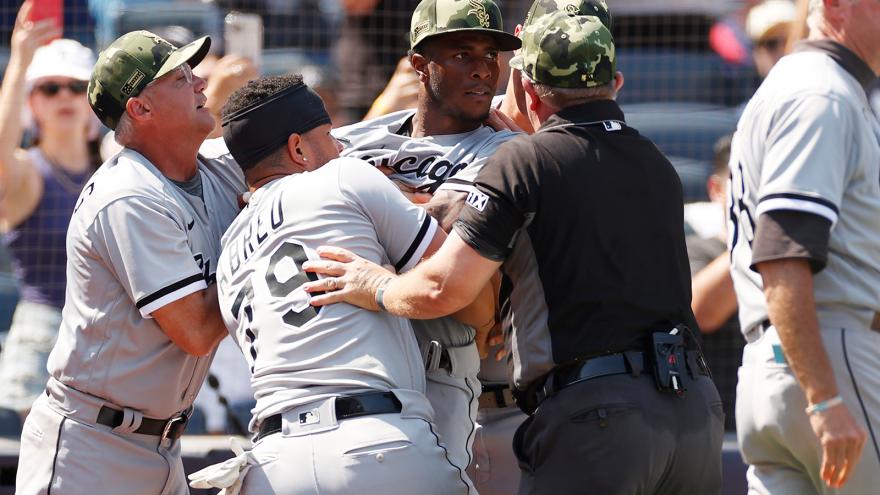 White Sox manager Tony La Russa said after the game that Donaldson had "made a racist comment."

Anderson, who is Black, told reporters Saturday that Donaldson, who is White, called him "Jackie" (Robinson) in a disrespectful way multiple times during the game.

"He was trying to call me Jackie Robinson, like 'What's up, Jackie?'" Anderson said after Saturday's game. "I don't play like that. I wasn't really bothering nobody today, but he made the comment and it was disrespectful. I don't think it was called for. It was unnecessary."

In the fifth inning of Saturday's game, both teams' benches cleared after a verbal confrontation between Donaldson and White Sox catcher Yasmani Grandal at home plate. Donaldson appeared to point to Anderson, who was playing in the field, and both benches cleared. Anderson had to be restrained by teammates. Both teams were issued warnings but no one was ejected.

In a locker room interview, Donaldson admitted he called Anderson "Jackie" during the game, but denied any racist intentions.

"We are not trying to start any brawls or anything like that," Donaldson told reporters after the game. "Obviously, he deemed it was disrespectful and look, if he did, I apologize because that's not what I was trying to do by any matter."

Donaldson said it had been a joke between the two players, and said they had joked about it previously after Anderson's 2019 interview with Sports Illustrated.

"I kind of feel like today's Jackie Robinson," Anderson told Sports Illustrated, while saying he wanted to bring "fun" back to baseball. "That's huge to say. But it's cool, man, because he changed the game, and I feel like I'm getting to a point to where I need to change the game."

"MLB has completed the process of speaking to the individuals involved in this incident. There is no dispute over what was said on the field" he said.

"Regardless of Mr. Donaldson's intent, the comment he directed toward Mr. Anderson was disrespectful and in poor judgment, particularly when viewed in the context of their prior interactions. In addition, Mr. Donaldson's remark was a contributing factor in a bench-clearing incident between the teams, and warrants discipline."

Earlier this month, the two players collided on an attempted pickoff tag at third and Anderson took exception to Donaldson's tag.

Donaldson has appealed his suspension, which was to take place Monday, according to the league. The league says "the discipline will be held in abeyance until the process is complete."

But Donaldson was placed on the Covid-19 injured list, according to the team.