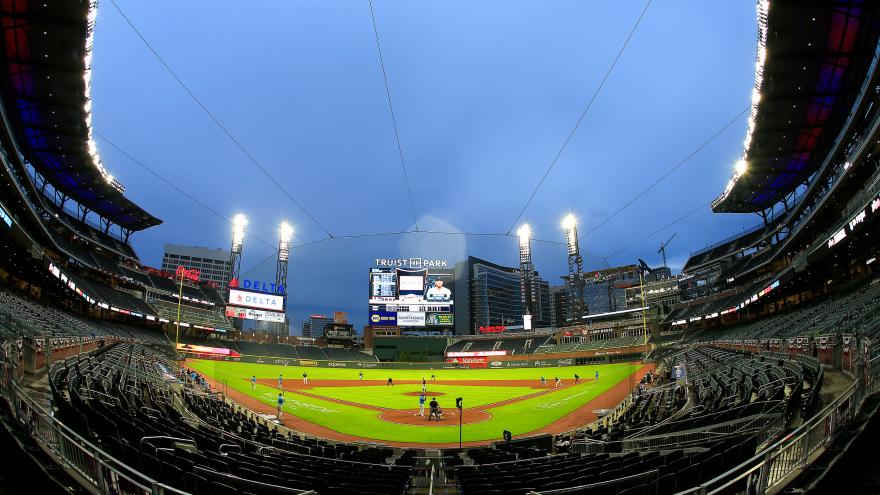 (CNN) -- Major League Baseball announced Friday that this season's All-Star Game and MLB Draft will not be held in Atlanta in response to Georgia's recently passed laws that placed new restrictions on voting.

The new host city for the July 13 game has yet to be announced, according to the league.

"Over the last week, we have engaged in thoughtful conversations with Clubs, former and current players, the Players Association, and The Players Alliance, among others, to listen to their views," MLB Commissioner Rob Manfred said in a statement. "I have decided that the best way to demonstrate our values as a sport is by relocating this year's All-Star Game and MLB Draft."

Georgia recently passed new voting laws, leading critics to call for boycotts of companies based in the state and for sports leagues to consider moving big events. Chief executives and other high-ranking leaders from more than 100 companies, including Target, Snapchat and Uber, issued a public statement Friday opposing any measures that deny eligible voters the right to cast ballots.

"Major League Baseball fundamentally supports voting rights for all Americans and opposes restrictions to the ballot box," Manfred said in the statement.

The new law in Georgia introduces new impediments to voting, reducing the number of drop boxes in heavily African American areas and allows the state to intervene to assert control over the conduct of elections in Democratic counties. It shortens the time available for absentee votes and introduces new registration requirements that campaigners say are designed to target Black voters.

The game was to be played at Truist Park in Atlanta, one of the cities where Hank Aaron, who died in January, earned accolades as one of the greatest players in the history of the game. MLB said Aaron will still be honored at the All-Star Game this summer.

President Joe Biden said Wednesday he would "strongly support" moving the game and its festivities from Atlanta.

Georgia Gov. Brian Kemp responded to Biden's comments in an interview with Fox News on Thursday, calling the move "ridiculous."

"When the President of the United States says something, you know a lot of people pay attention. But what Joe Biden needs to do is look at the side-by-side of Georgia and Delaware," Kemp said. "He's focused on trying to get Major League Baseball to pull the game out of Georgia, which is ridiculous."

Earlier Friday, Kemp tweeted: "Facts are stubborn things. Despite the outrage from the left, we are making it easy to vote and hard to cheat in Georgia."

The Atlanta Braves said the franchise is "deeply disappointed" by the decision to move the game.

"This was neither our decision, nor our recommendation and we are saddened that fans will be able to see this event in our city," according to a statement from the team. "The Braves organization will continue to stress the importance of equal voting opportunities and we had hoped our city could use this event as a platform to enhance the discussion."

The 2022 All-Star Game is scheduled to be played at Dodger Stadium in Los Angeles. On Friday, California Gov. Gavin Newsom tweeted that the league should call him because "in California, we actually work to expand voter access -- not prevent it."

MLB is not the first major sports league to move an All-Star Game.

In 2016, the NBA announced it would move its All-Star Game from North Carolina due to the state's controversial transgender bathroom law.

"While we recognize that the NBA cannot choose the law in every city, state and country in which we do business, we do not believe we can successfully host our All-Star festivities in Charlotte in the climate created by HB2," the league said in 2016, referring to the state law that requires transgender people who are in government buildings to use the bathroom corresponding to the sex with which they were born.

The game was played in February 2017 in New Orleans. The law was later repealed, and Charlotte hosted the All-Star Game in 2019.