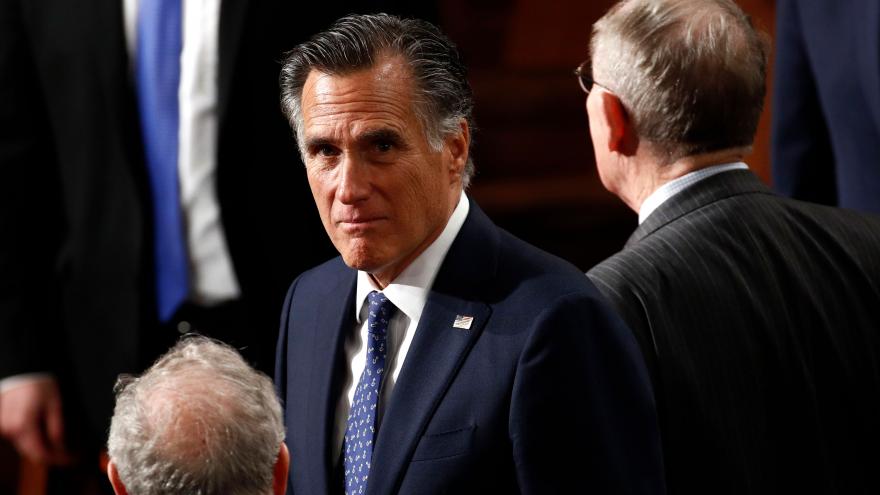 The Senate has acquitted President Donald Trump on the obstruction of Congress charge, voting not guilty on the second article of impeachment Wednesday in a 53-47 vote.

(CNN) -- The Senate voted to acquit President Donald Trump on two articles of impeachment Wednesday, marking the inevitable and historic end to a bitterly fought, divisive impeachment trial that will reverberate into the 2020 election and shape Trump's presidential legacy.

But the final day of the Senate's impeachment trial was not without suspense: Sen. Mitt Romney, a Utah Republican, found the President guilty of abuse of power, becoming the first senator in US history to vote to remove from office a president from the same party.

The third Senate impeachment trial of a sitting president in US history concluded Wednesday afternoon with votes finding the President not guilty of abuse of power and obstruction of Congress, the impeachment articles the House charged Trump with in December. Romney was the sole Republican to vote to convict the President on the first article of impeachment, abuse of power, joining with all Senate Democrats in a 52-48 not guilty vote. Romney voted with Republicans against the obstruction of Congress charge, which fell along straight party lines, 53-47 for acquittal.

The acquittal verdict was the final act of a four-month impeachment process that inflamed the partisan tensions simmering throughout the course of the Trump administration, friction that boiled over during the State of the Union even though Trump left impeachment out of his speech. While Wednesday's vote marks the end of the formal impeachment process, Trump and his Democratic detractors are sure to take up the fight over the ultimate significance of the President's impeachment as the presidential campaign heats up.

Though Trump is likely to claim victory and vindication with the Senate's vote — he tweeted he would be speaking "VICTORY on the Impeachment Hoax" Thursday, Romney's vote denies him a purely partisan outcome on impeachment. Every Democrat, including fence-sitters like Sen. Joe Manchin of West Virginia, voted to convict the President, meaning the acquittal vote was not bipartisan like it was in the House.

Press secretary Stephanie Grisham dismissed Romney as "one failed Republican presidential candidate" in the White House statement on the vote.

In his Senate floor speech announcing his vote, Romney choked up while explaining how his faith helped guide him to what he described as "the most difficult decision I have ever faced."

"Corrupting an election to keep oneself in office is perhaps the most abusive and destructive violation of one's oath of office that I can imagine," Romney said in explaining his vote.

After the Senate acquitted Trump of both charges, Senate Majority Leader Mitch McConnell would not say at a press conference whether he thought what Trump did was wrong, or if he agreed with some Republican colleagues it was inappropriate for a president to ask a foreign power to probe a political rival.

"Listen, we voted," McConnell said. "it's time to move on ... as far as I'm concerned it's in the rearview mirror."

House Speaker Nancy Pelosi, whose icy exchanges with Trump during the State of the Union only underscored the acrimony of the impeachment process, has been quick to remind Trump he's now been "impeached for life" by the House. Democrats have dismissed the Senate trial as a cover-up for the President after Senate Republicans refused to consider new and important evidence.

McConnell at his news conference knocked Pelosi's now-infamous moment where she ripped up a copy of Trump's State of the Union address.

"The speaker of the House says that she refuses to accept this acquittal," McConnell said. "Whatever that means. Perhaps she will tear up the verdict like she tore up the State of the Union address. So I would ask my distinguished colleagues across the aisle, is this really, really where you want to go?"

The ultimate impact of Trump's impeachment will remain murky until November, when voters will have their say on whether an impeached President will receive a second term.

The groundwork for the third impeachment of a US president began in September when Pelosi announced an impeachment inquiry following an anonymous whistleblower complaint alleging Trump sought election help from Ukrainian President Volodymyr Zelensky in a July 2019 phone call. The House's whirlwind investigation that followed uncovered a months-long effort, in which, Trump and his personal attorney Rudy Giuliani pressured Ukraine to announce investigations into the President's political rivals while $400 million in US security aid to Ukraine and a White House meeting were withheld.

The House voted to impeach the President on two articles in December, backed by all but two Democrats. Republican-turned independent Rep. Justin Amash of Michigan also voted in favor. Every Republican voted against it, and one of the Democrats who joined them in opposition, Rep. Jeff Van Drew of New Jersey, switched parties soon after.

In the Senate, Democrats knew the votes were never there to remove the President. So they focused their efforts on pushing for the trial to include testimony from witnesses and subpoenaing documents that the White House blocked during the House's impeachment inquiry.

The witness vote would be closely contested, and McConnell included a request from his moderates in the trial rules to have a vote whether witnesses should be called after opening arguments and senator questions.

The week of the vote, a bomb was dropped on Republicans working to defeat the witness vote — new revelations from the draft book manuscript of former national security adviser John Bolton alleging the President told Bolton US aid was conditioned on Ukraine announcing investigations into Democrats.

The revelations upended the Republican efforts to lock up votes to defeat the motion for witnesses, and Democrats argued that Bolton's claims and willingness to testify required the Senate to hear from him. McConnell urged his caucus to "take a deep breath." Republicans warned that calling Bolton could spark unintended consequences and an indefinite extension of the trial that had ground the Senate to a halt, while the President's attorneys told senators that what Bolton alleged, if true, still did not constitute an impeachable offense.

Two Republicans, Romney and Susan Collins of Maine, signaled they would support witnesses. A third, Sen. Lisa Murkowski of Alaska, was on the fence. But the potential key swing vote, Sen. Lamar Alexander of Tennessee, was convinced by the Republican argument, concluding the House proved its case but it didn't warrant impeachment.

"The question then is not whether the President did it, but whether the United States Senate or the American people should decide what to do about what he did," Alexander said Wednesday explaining his vote.

Murkowski also sided with Alexander, leading to a 49-51 vote against witnesses on Friday. She said she believed that all sides failed in the impeachment process: the House, the Senate and the President.

After the failed witness vote, the trial was headed to a quick end, and the two sides reached their only agreement of the trial: the trial would break for the weekend and the final vote would come Wednesday after closing arguments and three days of senator speeches to explain their votes.

'For all of history'

In closing arguments on Monday, Rep. Adam Schiff of California, the lead impeachment manager, urged senators to consider history as they cast votes of guilty and not guilty. The outcome may have been certain but not every vote had been accounted for.

"If you find that the House has proved its case and still vote to acquit, your name will be tied to his with a cord of steel and for all of history," Schiff said. "But if you find the courage to stand up to him, to speak the awful truth to his rank falsehood, your place will be among the Davids who took on Goliath. If only you will say enough."

One by one, however, the Republicans who may have been on the fence about voting to convict the President said they would render a verdict of not guilty — until Romney's announcement on Wednesday.

"Were I to ignore the evidence that has been presented, and disregard what I believe my oath and the Constitution demands of me for the sake of a partisan end, it would, I fear, expose my character to history's rebuke and the censure of my own conscience," Romney said.

Democrats praised Romney for standing up to his party, but the backlash was swift in Republican circles. Romney's GOP Senate colleagues said they were disappointed, downplaying the significance of his vote, while the President's son Donald Trump Jr. called for Romney to be expelled from the Republican Party.

Among Democrats, the impeachment managers' case convinced any wavering senators that Trump's actions did not warrant removal. The biggest Democratic wildcard was Sen. Joe Manchin of West Virginia, who said all week he was struggling with the decision. But both Manchin and Sen. Doug Jones of Alabama, the most vulnerable Senate Democrat up for reelection in 2020, said they reluctantly voted guilty.

"I cannot and will not shrink from my duty to defend the constitution and to do impartial justice," Jones said.