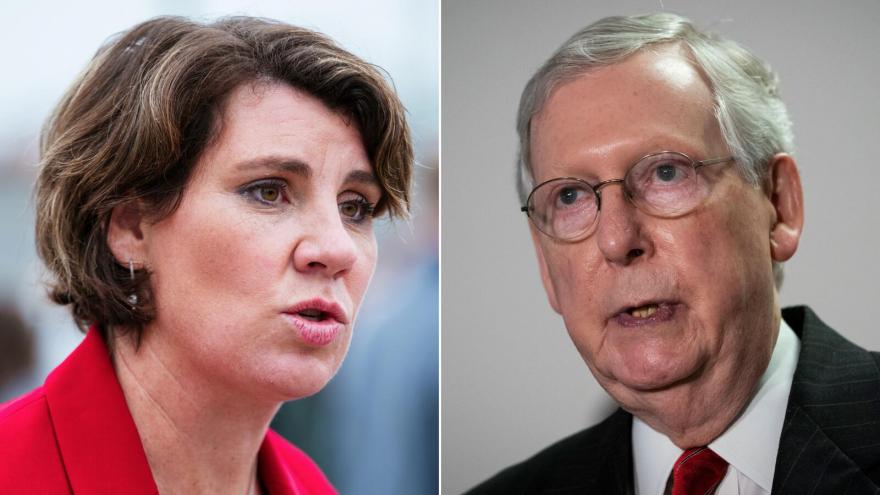 McGrath, a former fighter pilot who flew in combat for the Marines Corps, had the backing of powerful Democrats and became a high-profile challenger as a result of her prodigious fundraising ability, but nevertheless remained a long-shot in the red state fight against one of the most powerful Republicans in Washington.

The Democratic challenger made a name for herself as one of the top fundraisers of any Senate candidate on the ballot in 2020 and outraised McConnell with a total haul of roughly $90 million compared to the Republican incumbent's $57 million as of October 14, according to Federal Election Commission data.

But in the end that was no match for McConnell. The high-profile and expensive loss for McGrath is her second in as many cycles after she lost to incumbent GOP Rep. Andy Barr in 2018.

The Senate Majority Leader's campaign portrayed McGrath as a radical and extreme liberal on a collision course with President Donald Trump. McConnell's campaign emphasized his position of authority in the Senate, describing him as a "powerful voice for Kentucky," and highlighting praise from Trump, who won the state by a wide margin in the 2016 presidential election.

As the Senate fight drew to a close, McConnell presided over a major victory for the President and his party when the Senate Republicans confirmed Amy Coney Barrett to the Supreme Court in a high-stakes fight that showcased his ability to deliver on the key conservative priority of transforming the federal judiciary through lifetime appointments.

In her effort to unseat the powerful Kentucky Republican, McGrath painted McConnell as an out-of-touch Washington insider and framed the race as a chance to bring much-needed change to the state.

In an op-ed for the Lexington Herald-Leader that she described as her "closing argument" in the race, McGrath wrote that McConnell has "been there too long," saying, "This election is about the future of Kentucky, our democracy and our country. Let's work together to rebuild Kentucky stronger than before."