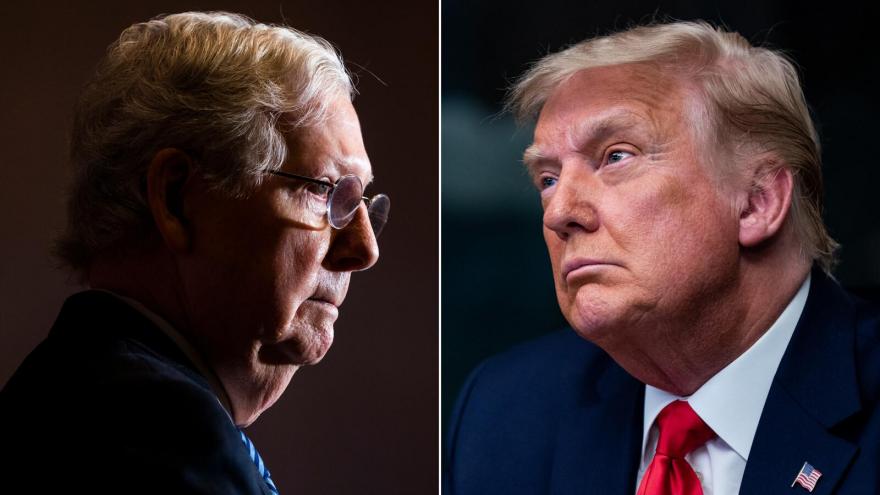 (CNN) -- Senate Majority Leader Mitch McConnell on Tuesday directly blamed President Donald Trump for the deadly mob that attacked the Capitol, as the Senate prepares for an impeachment trial on whether to convict the President for "incitement of insurrection" and potentially disqualify him from holding office in the future.

The typically tight-lipped Senate Republican leader rarely broke from Trump in his four years as president. But he led the Senate's certification of the presidential election that the rioters pledged to overturn, and has strongly condemned the violence at the Capitol he has served in as a senator for 36 years.

"The mob was fed lies," McConnell, a Kentucky Republican, said on the Senate floor. "They were provoked by the President and other powerful people."

The Senate Republican leader has not yet said whether he will vote to convict after the evidence is presented in the upcoming trial. McConnell has privately indicated that impeaching Trump would help remove the President's legacy from the public perception of the Republican party.

McConnell touted that Congress did its duty despite the violence on January 6, certifying the victory of President-elect Joe Biden and Vice President-elect Kamala Harris.

"We'll have a safe and successful inaugural right here on the very front of the Capitol," said McConnell.

McConnell's comments came as the Senate prepares to hold an impeachment trial over the House's charge of "incitement of insurrection." McConnell said on Tuesday that the Senate has received a message from the House that Trump has been impeached but noted that the House has not yet transmitted the article to the Senate.

"We need to set a precedent that the severest offense ever committed by a President will be met by the severest remedy provided by the Constitution — Impeachment and conviction by this chamber as well as disbarment from future office," Schumer said.

McConnell touted on Tuesday that Congress did its duty despite the riot on January 6, certifying the victory of President-elect Joe Biden and Vice President-elect Kamala Harris.

"We'll have a safe and successful inaugural right here on the very front of the Capitol," said McConnell.

McConnell said Congress would soon turn to work for the American people and asserted that no party has a broad mandate after the 2020 elections, which flipped the White House and Republican-led Senate to the Democrats.

"Certainly November's elections did not hand any side a mandate for sweeping ideological change," said McConnell. "Americans elected a closely divided Senate, a closely divided House and a presidential candidate who said he'd represent everyone."

"So our marching orders from the American people are clear," said McConnell. "We're to have a robust discussion and seek common ground. We are to pursue bipartisan agreement everywhere we can, and check and balance one another, respectfully, where we must."