MIT will once again require applicants to take the SAT or ACT, bucking anti-test movement 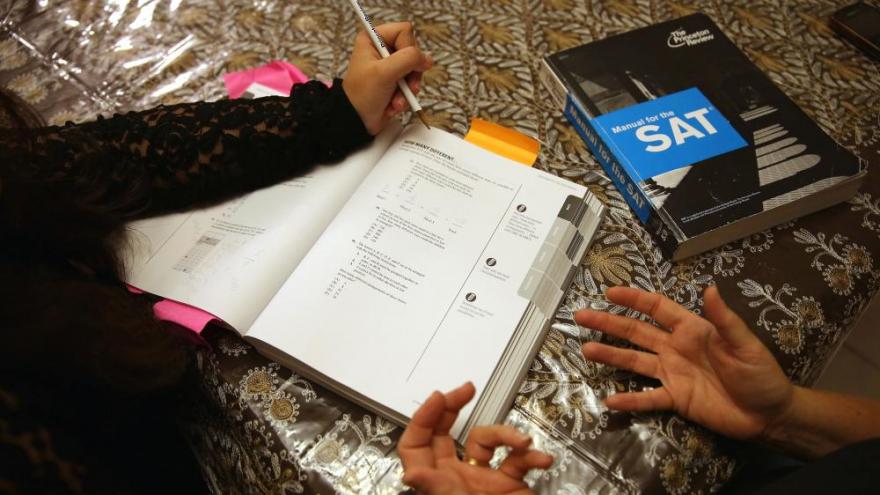 The Massachusetts Institute of Technology announced it will once again require applicants to take the SAT or ACT, reversing a Covid-era policy that made the standardized tests optional and rejecting the idea that the tests hurt diversity.

(CNN) -- The Massachusetts Institute of Technology announced it will once again require applicants to take the SAT or ACT, reversing a Covid-era policy that made the standardized tests optional and rejecting the idea that the tests hurt diversity.

"Our research shows standardized tests help us better assess the academic preparedness of all applicants, and also help us identify socioeconomically disadvantaged students who lack access to advanced coursework or other enrichment opportunities that would otherwise demonstrate their readiness for MIT," Dean of Admissions Stu Schmill wrote in a blog post Monday.

"We believe a requirement is more equitable and transparent than a test-optional policy."

The requirement applies to those hoping to enter the Cambridge, Massachusetts, university in 2023.

The decision comes after a number of elite universities, including MIT, did away with the test requirements in 2020 and 2021 due to disruptions caused by the pandemic. The entirety of the Ivy League and the University of California system were among the more than 1,800 colleges and universities that dropped testing requirements for students entering in fall 2022, according to the non-profit advocacy group National Center for Fair & Open Testing, or FairTest.

The SAT and ACT tests have long been criticized for bias against those from poor households as well as Black and Hispanic students. The high-stakes nature of the tests means that those with more resources can afford to take expensive test prep courses -- or even, as the 2019 college admissions scam revealed, to cheat.

Bob Schaeffer, the executive director of FairTest, said in a statement in December that the test-optional policy had proved its effectiveness.

Test-optional advocates had made the case that these temporary measures should be made permanent even after Covid's threat wanes. MIT's decision bucks that trend and contrasts the growing movement against standardized tests.

On Monday, Schill wrote that MIT was bringing back the test requirements because the availability of vaccines has reduced the risks of such in-person gatherings.

Removing the test requirement does not actually remove inequality in education, he wrote. Many schools offer the SAT or ACT for free, while many low-income or underrepresented students "often cannot afford expensive enrichment opportunities, cannot expect lengthy letters of recommendation from their overburdened teachers, or cannot otherwise benefit from this kind of educational capital."

He also argued that MIT's research shows that standardized testing helps to accurately predict student success at MIT, particularly in math. He noted that this could be because the university requires students to take calculus and calculus-based physics.

"The substance and pace of these courses are both very demanding, and they culminate in long, challenging final exams that students must pass⁠ to proceed with their education," he wrote.⁠ "In other words, there is no path through MIT that does not rest on a rigorous foundation in mathematics, and we need to be sure our students are ready for that as soon as they arrive.⁠"

Schmill said the SAT/ACT is a single tool among many factors in granting admission. He acknowledged that the tests can be a source of stress but affirmed that acceptance to MIT is not a measure of worthiness as a person.

"It only means that we are confident you, at this specific moment in your educational trajectory, can do well in the kind of hard math and science tests demanded by our unusual education," he wrote.