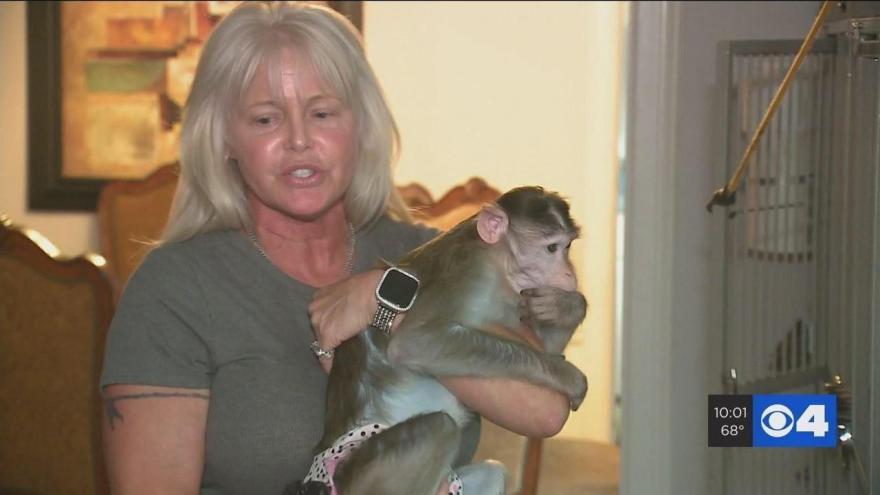 **Embargo: St. Louis, MO** Texanne McBride-Teahan is fighting back against her neighbors to keep the three monkeys who live with her. She says they serve as emotional support, but neighbors are worried for their safety.

(CNN) -- A Missouri woman is fighting to keep three monkeys she claims have provided her emotional support for years.

Texanne McBride-Teahan may lose possession of the animals after a neighbor in Creve Coeur, a suburb of St. Louis, spotted one monkey outside roughly a month after McBride-Teahan moved in, according to CNN affiliate KMOV.

Monkeys are considered an "inherently dangerous animal" along with alligators, lions and pythons and are thus prohibited in residential areas, according to the City of Creve Coeur.

McBride-Teahan considers the monkeys emotional support animals and has a doctor's letter and registration cards for them, she told CNN through Facebook. The animals help her cope with post-traumatic stress disorder related to an incident when she was a teenager, McBride-Teahan added.

"However, some state or local governments have laws that allow people to take emotional support animals into public places," the ADA adds.

McBride-Teahan is scheduled to appear in court over her monkeys in November, KMOV added.

"Monkeys are little. Less than 9 pounds. Pictures show they aren't dangerous. To me they are life savers for my PTSD. We just want to live in peace," McBride-Teahan told CNN.