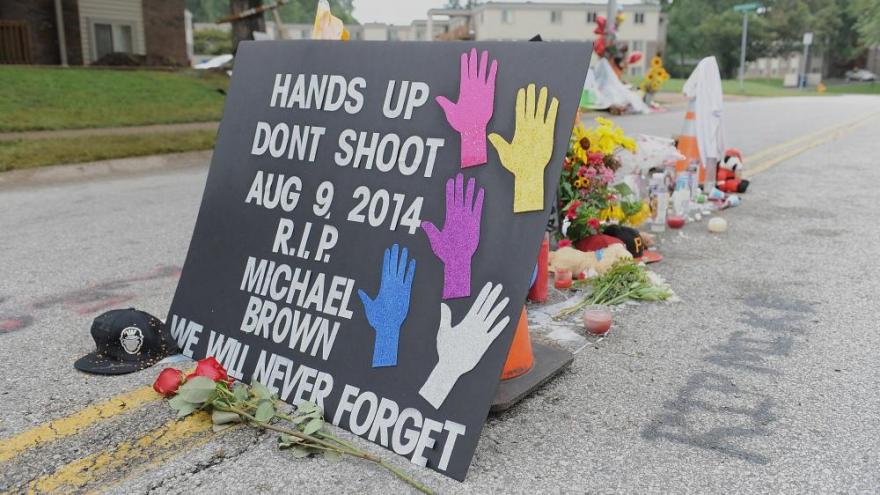 A memorial at the place where Michael Brown Jr. was killed in 2014 in Ferguson, Missouri.

Wilson's shooting of Brown, a Black man, in August 2014 sparked a federal civil rights inquiry, protests, and a national debate. Protests erupted around the country after a grand jury declined to indict Wilson.

"Although this case represents one of the most significant moments in St. Louis' history, the question for this office was a simple one," Bell said. "Could we prove beyond a reasonable doubt that when Darren Wilson shot Michael Brown, he committed murder or manslaughter under Missouri law?"

"After an independent and in-depth review of the evidence, we cannot prove that he did," Bell said.

Wilson shot Brown, who was not armed, after a struggle ensued when Wilson stopped Brown on a Ferguson street. Witnesses at the time said the officer fired his gun while Brown's hands were in the air. Wilson has said Brown attacked him, and he feared for his life.

"I also want to be clear that our investigation does not exonerate Darren Wilson," Bell said, pointing out the difference between proving a case during trial and "clearing him of any and all wrongdoing."

"There are so many points in which Darren Wilson could have handled the situation differently, and if he had, Michael Brown might still be alive," Bell said.

"But that is not the question before us. The only question is whether we can prove beyond a reasonable doubt that a crime occurred," Bell said. "The answer to that question is 'no.' And I would violate my ethical duties if I nonetheless brought charges."

CNN has reached out to Brown's family for comment.

The family brought a wrongful death lawsuit against the city and reached a settlement in 2017.