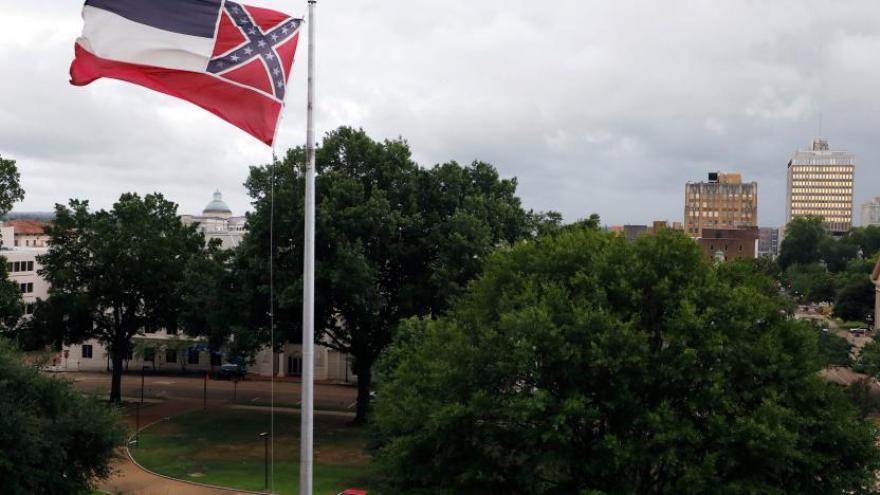 A Mississippi state flag flies outside the Capitol in Jackson, Miss., Thursday, June 25, 2020. Republican Gov. Tate Reeves is set to sign a bill Tuesday evening to remove the Confederate emblem, the only remaining state flag to feature the Confederate insignia.

(CNN) -- Mississippi Gov. Tate Reeves on Tuesday signed a bill that takes a historic step to retire the last US state flag to feature the Confederate battle flag.

"This is not a political moment to me, but a solemn occasion to lead our Mississippi family to come together to be reconciled and to move on," Reeves, a Republican, said before he signed the legislation.

The signing caps a swift referendum on the flag from the Mississippi state Legislature, which passed the bill on Sunday following weeks of racial justice protests across the country. The flag, first adopted in 1894, has red, white and blue stripes with the Confederate battle emblem in one corner.

A commission will now develop a new flag design without the Confederate emblem that includes the phrase "In God, We Trust." Mississippi voters will vote on the new design in November.

"I know there are people of goodwill who are not happy to see this flag changed. They fear a chain reaction of events erasing our history -- a history that is no doubt complicated and imperfect," Reeves said Tuesday.

"I understand those concerns and am determined to protect Mississippi from that dangerous outcome."

In recent weeks, the police killing of George Floyd has spurred the removal -- by protesters in some cases and city leaders in others -- of contentious statues and Confederate symbols that have upset some residents for decades, if not longer.

Floyd, a 46-year-old Black man, died on May 25 in Minneapolis. While being arrested, Floyd was held down by a White Minneapolis police officer's knee for more than eight minutes. His death in police custody, which was captured on video, has prompted widespread conversations about systemic racism.

"I reject the mobs tearing down statues of our history -- North and South, Union and Confederate, Founding Fathers and veterans. I reject the chaos and lawlessness and I am proud it has not happened in our state," Reeves said.

"I also understand the need to commit the 1894 flag to history and find a banner that is a better emblem for all Mississippi."

The signing was praised by a bipartisan collection of lawmakers Tuesday.

"I appreciate our state legislators for having the courage and conviction to make this necessary change to our state flag," he said. "As I have maintained since 2015, Mississippians deserve a banner that unites us rather than divides us."

That message was echoed by State Rep. Jeramey Anderson, a Democrat from Moss Point, who applauded the legislation but cautioned, "We're not done."

"The work continues to end voter suppression, as well as health care and education disparities in black & brown communities," he said. "This is step one!"

The American Civil Liberties Union also celebrated the move as foreshadowing "a new day for Mississippi" in a statement to CNN.

"It signifies to everyone to come work, play, and live in Mississippi, the Hospitality state."

Still, Confederate Memorial Day and Robert E. Lee's birthday remain official state holidays in Mississippi and continue to prompt a larger debate about how to recognize the state's history.

Reeves acknowledged that debate Tuesday, declaring "there are people on either side of the flag debate who may never understand the other" but the state "must show empathy."

"We must understand that all who want change are not attempting to erase history and all who want the status quo are not mean spirited or hateful."