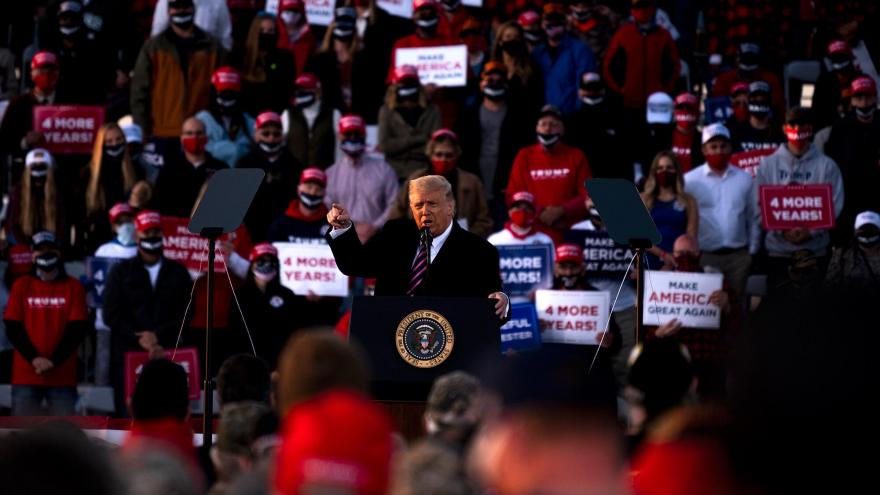 President Donald Trump speaks to supporters during a rally at the Bemidji Regional Airport on September 18, 2020 in Bemidji, Minnesota.

(CNN) -- The Minnesota Department of Health is reporting three Covid-19 outbreaks related to Trump campaign events held in the state in September.

At least 23 cases have been traced to outbreaks occurring at rally events in Bemidji on September 18, a speech held by Vice President Mike Pence on September 24 in Minneapolis, and another rally held by President Donald Trump on September 30 in Duluth, the department said in an email to CNN.

Minnesota defines an outbreak as "two or more cases of illness related by time and place in which an epidemiologic investigation suggests either person-to-person transmission occurred" or some other vehicle, such as contaminated water, is implicated. Public health experts say it is difficult to pinpoint any one event to overall changes in trends in light of the fact that there is overall increased community transmission. But experts also agree that holding such events in this climate is not a best practice for public health.

Trump's Bemidji rally took place in an airport hanger. According to a CNN producer who attended the event, at least 2,000 people were in attendance. Based on contact tracing by the state Department of Health, at least 16 cases, including two hospitalizations, were identified among attendees.

On September 24, Pence and the President's daughter, Ivanka Trump, held a "Cops for Trump" listening event indoors at the InterContinental Hotel in Minneapolis-St. Paul. The state Department of Health has found three event attendees with Covid-19 infections.

In the month before the event, the seven-day average was just under 180 new cases in Hennepin County and had dropped to an average of 169 new cases on the day of the vice president's visit, according to Johns Hopkins. A month later on October 24, that daily new case average was over 266 new cases a day.

The increase in cases coincides with an overall upward trend of new cases in the state of Minnesota that started September 10. The state's average number of daily new cases was 727 on September 18 and had more than doubled a month later to 1,506. The state set a daily record number of new cases on October 16 with 2,290 cases.

Another four cases have been traced by the Minnesota Department of Health to a rally the President held on September 30 in Duluth.